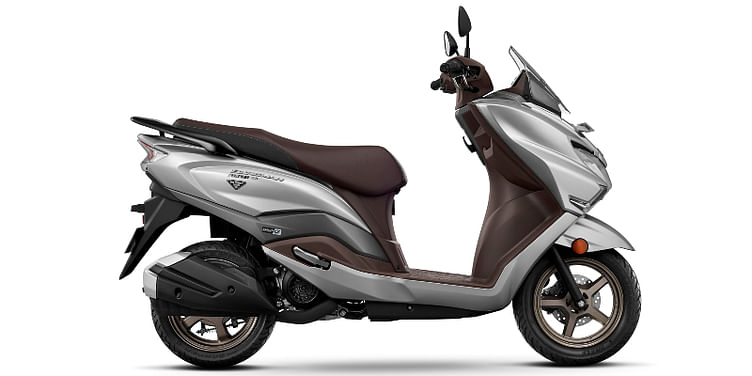 The new Suzuki Burgman Street EX is identical to the other two variants of the scooter, but packed with a fresh identity.

Suzuki has launched a new top-of-the-line variant of its flagship scooter Burgman Street EX. Priced at Rs 1,12,300 (ex-showroom, Delhi), this variant costs Rs 22,400 more than the base variant, and Rs 19,000 more than the mid-spec Ride Connect trim.

While this is a significant bump, Suzuki attempts justifying the premium pricing with added amenities to the package. The updates appear similar to the Burgman Street 125EX sold in the United Kingdom.

The new Burgman Street EX gets a few features added to its equipment. For instance, it benefits from a silent starter system and an auto start/stop function. One can expect better fuel efficiency from this iteration since it is equipped with Suzuki’s Eco Performance Alpha (SEP-α) tech–an advanced version of the brand’s fuel-saving Eco Performance Technology.

The scooter has also undergone some minor hardware updates. It is a kilo heavier than the standard Burgman at 111 kg. The EX trim has a 25mm longer wheelbase but is 5mm narrower than the other two variants of Burgman. Another significant update is the use of a larger 12-inch rear wheel (instead of a 10-inch unit) with a wider 100/80-12 tyre.

While the design of Burgman Street EX is identical to its siblings, the former gets three new colour schemes–Metallic Royal Bronze, Metallic Matte Black, and Metallic Matte Platinum Silver No 2.

As mentioned, the design of this new variant is similar to the standard Burgman that sports a Maxi scooter styling with heavily-faired front panels. Creature comforts including an LED headlight, a Bluetooth-enabled LCD instrument panel and a USB charging socket have also been retained in the package.

Moreover, Burgman Street EX draws power from the same 124cc, two-valve, single-cylinder engine that performs duties on the other variants. The motor kicks out  8.6 bhp (0.1 bhp less) at 6,750rpm and 10 Nm of peak torque at 5,500rpm. Power is sent to the rear wheels via a CVT automatic gearbox.

The same suspension system is retained and comprises telescopic forks at the front and a swingarm-type rear suspension. Braking duties are carried out by a front disc and a rear drum brake, complemented by a combined braking system. As for rivals, Burgman Street EX locks horns with other premium 125cc scooters like TVS NTorq Race Edition and Aprilia SXR 125.