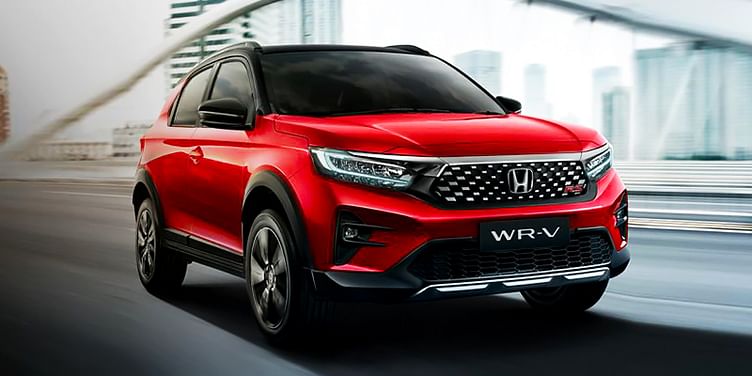 The second-gen Honda WR-V is based on the same platform that underpins the India-spec Amaze.

Honda has officially unveiled an all-new version of WR-V in Indonesia where it is slated to go on sale first. The first-gen WR-V hasn’t been able to set the sales charts on fire and Honda is hoping to make amends by introducing a completely overhauled iteration of the subcompact SUV.

In its second generation, the new WR-V has witnessed a massive transformation from the current model in almost every department. The new model is based on the Honda Concept RS SUV that was showcased at the last edition of the Gaikindo Indonesia International Auto Show.

From the images, it is evident that Honda has reworked the design of the new WR-V from scratch, with plenty of resemblances to the Concept RS SUV. The most noticeable change is a classic SUV-like stance compared to the cross-hatchback styling of its predecessor.

Honda, Sony join hands to develop EVs, first model to be out by 2026

The latest iteration of WR-V follows Honda’s latest design template and borrows styling cues from its bigger cousins–HR-V and CR-V, sold overseas. Up front, it features a wide hexagonal chrome-studded grille, which is headlined by a chrome beam and flanked by angular wraparound headlamps. The front bumper has been redesigned with new fog lamp housings, splitters, air dams, and a faux skid plate.

Despite a taller stance, the new WR-V sports a crossover-like design, with a tapering roofline and an angular tailgate. A prominent character line across the shoulder gives the side profile a distinct appearance. Black claddings draped around the round wheel arches and door sills give the car a muscular appeal, while the arches are filled up nicely by 16- or 17-inch dual-tone alloy wheels, depending on the variant.

The SUV’s tail is highlighted by split LED taillamps and a sharper-looking bumper housing a faux silver-coloured skid plate and a licence plate enclosure. The RS variants benefit from additional sportier highlights such as red accents on brake callipers, RS badging on the front grille, and blacked-out roof and pillars.

The new-gen WR-V is based on the same platform that underpins the Amaze sold in India and the older fourth-gen City. The current WR-V is based on the Jazz platform and, as a result, the SUV has grown in size. It is 4,060 mm long, 1,608mm high, and 1,780mm wide, making it longer, wider and taller than the outgoing WR-V. It also has a larger boot with 380 litres capacity and a higher ground clearance of 220 mm.

The interior layout of the new WR-V’s cabin appears to be an exact replica of the India-spec Amaze. The RS variants flaunt an all-black theme inside the cabin, accentuated by sporty red highlights on the dashboard, door panels, and steering wheel.

On the equipment front, the new-gen WR-V gets a healthy dose of features including a seven-inch touchscreen infotainment system, a semi-digital instrument console with analogue dials and a 4.2-inch TFT display in the middle, auto climate control, push button start-stop, leatherette upholstery, rear-view camera, a 6-speaker audio system and more.

Powering the 2023 WR-V is a 1.5-litre i-VTEC petrol engine that churns out 119 bhp at  6,600 rpm and a peak torque of 145 Nm at 4,300 rpm. This is the same motor that performs duties on the current-gen City and comes paired with either a 5-speed manual or a CVT automatic gearbox.

There are high chances of the new-gen WR-V launching in India in the future. For this to happen, the company has to rework its dimensions to bring it under the sub-4 metre category.