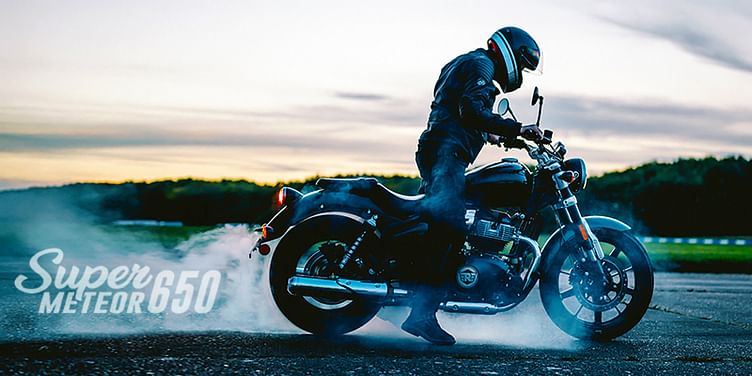 Super Meteor 650 is Royal Enfield’s new flagship model that sits on top of the current 650 Twins—Interceptor and Continental GT.

After years of development and road testing, Royal Enfield has finally taken the covers off the upcoming Super Meteor 650 in its final production-spec avatar. The third offering in Royal Enfield's 650cc lineup, the Super Meteor 650cc is the second cruiser motorcycle in the company’s range after its 350cc cousin– Meteor.

Prices of the upcoming cruiser will be announced at the time of its official launch, expected to take place later this month, most probably around Royal Enfield’s annual Rider Mania festival. Prior to its launch, the Chennai-based bikemaker has released most of the motorcycle’s details.

Super Meteor 650 will be available in two trims–standard and Tourer, which will be further divided into multiple variants as per their respective colour schemes. The standard trim will be offered in two variants-Astral and Interstellar, while the fully-loaded Tourer trim comes in a sole Celestial variant.

For any cruiser motorcycle, design is the key and the same goes for Super Meteor 650. It gets a typical low-slung stance of a cruiser thanks to its laid-back rider’s triangle comprising forward-set footpegs, a wide pulled-back handlebar, and a low, split-style scalloped seat. The use of 19-inch front and 16-inch rear alloy wheels further amplifies the proportions of a typical cruiser.

Retro styling is a signature asset for almost every Royal Enfield model and Super Meteor 650 is no different, with its round headlamp, a large 15.7-litre teardrop-shaped fuel tank, circular taillamp and turn indicators, and a broad rear fender. Other visual highlights include twin exhaust mufflers and a 3D Royal Enfield branding on the fuel tank.

The top-spec Tourer variant is spruced up with accessories like larger footpegs, a touring handlebar, a pillion backrest, pannier boxes, a tall windscreen and dual touring seats. The motorcycle is supported by an extensive list of add-ons that can be availed via the brand’s Genuine Motorcycle Accessories section.

Super Meteor 650 is underpinned by a new chassis built on a tubular spine frame that shares some of its components with Interceptor 650 and Continental GT 650. The frame is suspended on 43mm upside-down front forks (a first for any Royal Enfield model) and preload-adjustable twin shock absorbers at the rear with a travel of 120mm and 101mm, respectively.

Braking duties are handled by a 320mm disc at the front and a 300mm at the rear, complemented by a dual-channel ABS. Another major highlight is the dimension of the motorcycle with a seat height of 740mm, making it accessible to riders of all stature. A kerb weight of 241 kg makes Super Meteor 650 the heaviest Royal Enfield bike till date.

The low height of the bike has resulted in a ground clearance of 135mm which on paper appears to be inadequate for Indian roads. A wheelbase of 1500mm lends the motorcycle straight-line stability which cruisers are best known for.

Powering Super Meteor is a familiar 648cc air- and oil-cooled, parallel-twin engine that propels the other two 650 Twins. This unit pushes out 47 hp at 7,250 rpm and a peak torque of 52.3 Nm at 5,650rpm. While the output remains identical, peak torque arrives 500rpm later in the cruiser when compared to the 650 twins. The engine is mated to a six-speed gearbox whose ratios have been tweaked to suit the cruiser style of riding.

Given its premium positioning, Super Meteor 650 is the most feature-loaded Royal Enfield yet. It has been equipped with features such as an LED headlight and taillight, a semi-digital instrument console, a USB charging port, and a Tripper Navigation pod with Bluetooth connectivity.

Upon launch, Super Meteor 650 will rival premium cruisers like Kawasaki Vulcan S and Ducati 502C, although the Royal Enfield offering is expected to be more aggressively priced than its competitors. We expect Super Meteor 650 to boast a price tag of around Rs 3.5-4.0 lakh (ex-showroom).