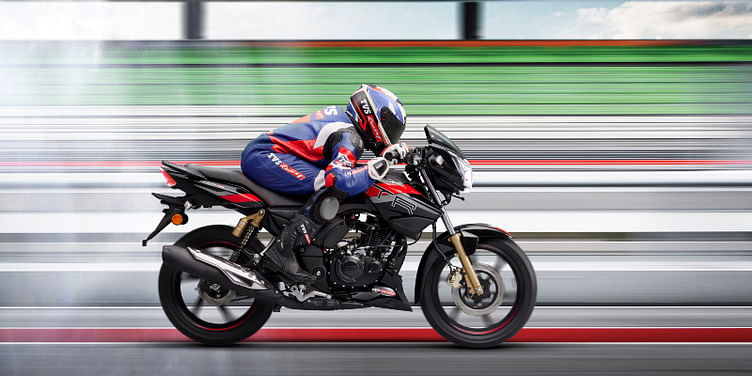 The Apache range of sporty motorcycles from TVS goes head-to-head against the Pulsar series from Bajaj.

TVS Motor Company is on a roll as it continues to update its lineup with new products and also refurbish the existing models. The Apache brand of motorcycles has been the golden goose for the Hosur-based manufacturer since 2005 and it continues to rake in large volumes for the company.

The bikemaker has now taken the wraps off the new versions of Apache RTR 160 and Apache RTR 180. The motorcycles are now available at starting prices of Rs 1,17,790 and Rs 1,30,590 (both ex-showroom), respectively. Both bikes have undergone some notable changes, most significantly in the mechanical and features department.

The RTR 160 will be offered in three variants including Drum, Disc, and Disc with Bluetooth connectivity. The latter two are priced at Rs 1,21,290 and Rs 1,24,590 (both ex-showroom). On the other hand, the RTR 180 is available in a single fully-loaded variant.

Branded as the “All-New Racer’s Choice”, the updated range of Apache RTR 2V models receive revised cosmetics and look more modern. The motorcycles get a slightly tweaked LED headlamp cluster with integrated LED DRLs, designed for better penetration. This is complemented by a new and compact LED taillight setup with a uniform lighting pattern.

Other signature highlights such as the extended tank shrouds, split grab rails for pillion and an upswept, aluminium-coated exhaust canister have been retained. The new Apache RTR 160 comes in five colour options including Gloss Black, Pearl White, Racing Red, Matte Blue and T-Grey. RTR 180 is available in only two shades– Gloss Black and Pearl White.

Transmission duties on both models are carried out by a 5-speed gearbox. Apart from the additional ponies from the motors, TVS has been able to reduce some weight from both bikes. Apache RTR 160 is now lighter by 2 kg whereas RTR 180 is down by 1 kg. The reduction in weight should also enhance performance of both motorcycles with an improved power-to-weight ratio.

For the category they belong to, i.e. 150cc-200cc, both bikes are very well loaded with features. The bikes get an all-new fully digital instrument panel that is enabled with Bluetooth connectivity and TVS’ SmartXonnect technology with Voice Assist.

Honda looks to take on Indian streets with the new CB300F

The console can be paired with the TVS Connect App on the rider’s smartphone to unlock a bucket of convenient features. To top it all, both bikes are now offered with dedicated ride modes– urban, rain and sport, a first in this segment. Other significant updates in equipment involve a wider 120mm rear tyre and a new X-ring chain.