On the last mile: Meet the women who are driving change across India, one delivery at a time 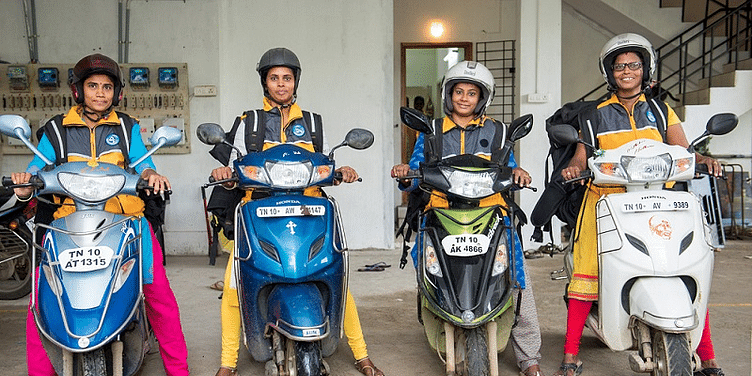 A former EY employee in Bengaluru and a kirana store owner in a Telangana village are among the many women across India who are choosing to enter last-mile delivery, an all-male blue-collar workforce until recently.

Bengaluru-based Pooja P Jain, 24, is a Commerce graduate from Jain University. She worked with EY as an assurance associate for six months, and then with AI startup Haptik for a year and half. In 2017, Pooja, an avid design enthusiast, left that job and joined a part-time course for a master’s degree in animation. While she continues to purse that, three months ago, she joined the delivery team at food delivery startup Swiggy and did about 15 deliveries daily. Today, she is a fleet manager in charge of a team of delivery girls.

Maria Tony, 52, runs a kirana store in Tirumalagiri village in Suryapet district, Telangana. Having completed Class 12 and learned typing, she was working in a private company for a few years. Once she had children, she and her husband started a kirana store in 2005. Eight months ago, Maria joined online fashion marketplace Myntra’s “kirana delivery network” through which she delivers Myntra’s parcels within a 5-km radius of her store. Under this initiative, named Myntra Extended Network for Service Augmentation, Maria makes a commission of Rs 15 per delivery and often completes 25-30 deliveries in less than five hours.

Pooja and Maria are part of an otherwise male-dominated workforce - that of last-mile delivery. In fact, the change is so strong and rapid that your food order or other parcels may soon be delivered by women more often than you expect.

Encouraging women at the wheel

Although there are umpteen startups in the logistics space in India, Mumbai-based HeyDeeDee was the first all-women instant parcel delivery service. Established in 2016, it serves mostly ecommerce companies and supermarkets. HeyDeeDee has onboarded 300-400 girls by reaching out to communities and NGOs. It trains them for 45 days (if they’re riding bikes) and 90 days (if they’re going to be driving), and often provides them with vehicles too.

New generation enterprises in logistics are actively encouraging women to build a new job profile, or earn extra income in their spare time.

Ecommerce major Amazon India has three all-women delivery stations in the country. Women at these stations – Chennai, Chandigarh, and Dhule - deliver packages on two-wheelers within a 2-3 km radius of the delivery station. Through its service partners, Amazon has close to 50 women who deliver packages to their customers across cities. Amazon’s I-Have-Space programme works with local store-owners to deliver on behalf of Amazon; over 150 women are among them.

It’s a win-win situation for all parties when a large company brings last-mile delivery to a point closest to the delivery address. Myntra launched its kirana network programme in 2017 and has, so far, tied up with more than 9,000 stores (including tailors and beauty parlours) across 50 cities for last-mile delivery of their orders. Today, about 60 percent of Myntra’s deliveries and pick-ups happen through this network.

Women in a man’s world

For any delivery personnel, parking issues, cash collection, returning change, and dealing with a customer’s wrath, etc. are all in a day’s work. Companies are therefore going the extra mile to protect their women personnel. Women riders mostly work between 9.00 am and 7.00 pm, in “safer” zones like business districts and business-oriented suburbs. In Bengaluru, these would be areas like Indiranagar, MG Road, and Koramangala. In Chennai this would be Alwarpet, Anna Salai, or Nungambakkam.

There are exceptions though. Kalaivani J, part of concierge service Dunzo’s delivery team in Bengaluru, recollects that she once got a task at 10.45 pm to get sanitary pads. “I knew she probably needed it badly, and I got her the package. I could see the relief on her face and the surprise at receiving it from a woman,” she recollects.

Most female delivery staff keep a can of pepper spray with them, in case of an emergency. But all the delivery staff that YourStory spoke to said they had no untoward incident to report.

Jayasudha Balaji, 36, an Amazon delivery associate in Chennai, says that although she was initially nervous about this job, she has never faced any derision. “At homes, during day time, mostly women take the delivery. Now, customers are getting used to seeing us,” she says.

Pooja recounts, “Once I got lost and the delivery was delayed. I was expecting the customer to be angry, but they were quite patient and said they were glad to see a girl doing the delivery.” She adds that although her family is used to seeing her choose to do something different, they did have safety concerns at first. “But they are now happy and have told our relatives also.”

Although delivery is a part-time job for many, HeyDeeDee Co-founder Revathi Roy says women earn between Rs 10,000 and Rs 20,000 per month, depending on the number of deliveries they do. According to her, most of them are working full time as delivery staff. To control the attrition rate, which is now 20-25 percent, HeyDee provides these women with ESOPs and a fixed deposit that can be encashed after a year.

It would look like the stigma that was formerly associated with women working in blue collar jobs for women is disappearing.

Delivery women take their job very seriously. Maria proudly says that she has 8-10 rating for her Myntra deliveries. “I joined this programme because I needed more money, with both my sons in college. I have on-boarded three of my friends for this programme, too,” she says.

The dreams grow bigger as they settle into their jobs. Pooja wants to be an operations manager at Swiggy one day, while Jayasudha, a graduate, is aiming for an office job as an Amazon partner. Jayasudha, in fact, is among the 15 women associates of Amazon’s delivery partner Jamuna Rani, 37, in Chennai.

Speaking to YourStory, Jamuna recounts how she started her warehouse in 2016 in a one-bedroom apartment with three delivery girls. She had left her job as a software engineer after 10 years and two children, as she wanted no night shifts. When she heard about the Amazon opportunity from a friend, she signed up, got trained, and built a new dream.

“It is empowering to empower other women. We deliver the packages and pick up returns. We have one office van and deliver girls’ bikes too,” Jamuna says. Her delivery associates are all above the age of 25 years, and her team delivers in and around Chennai's Ramapuram area.

Amazon claims that Sahiba, one of their service partners in the Andaman & Nicobar Islands, started delivering about 25 packages daily in 2015, and currently delivers more than 60x in a day in and around Port Blair. In 2015, she had two delivery associates; she now has more than 25 delivery associates working at her station.

Similarly, Chennai-based Radha joined Amazon as a service partner late in 2014 with one delivery station and a small delivery team. Today she has expanded her business to four delivery stations in the suburbs of Chennai, and has appointed over 70 delivery associates who deliver across 35 pin codes in the city. This expansion came in the wake of the 20x growth in daily volumes since she started out in 2014.

Silent revolutions are the strongest

May be this is how women’s empowerment should, and will, work: women helping women climb up the economic ladder, changing societal norms without necessarily making a noise, weaving themselves into a social fabric that was “not meant for women” until now.

Forward-thinking organisations are backing them, even in details like providing women-only toilets at warehouses for delivery women. All the female delivery staff that YourStory talked to say they have got nothing but appreciation from customers, and support from their family.

Call it feminism at the grass-root level when Kalaivani says that it is important to have women in every field. As Pooja puts it, “When a man can do it, why not a woman? I can make a change through this job.”