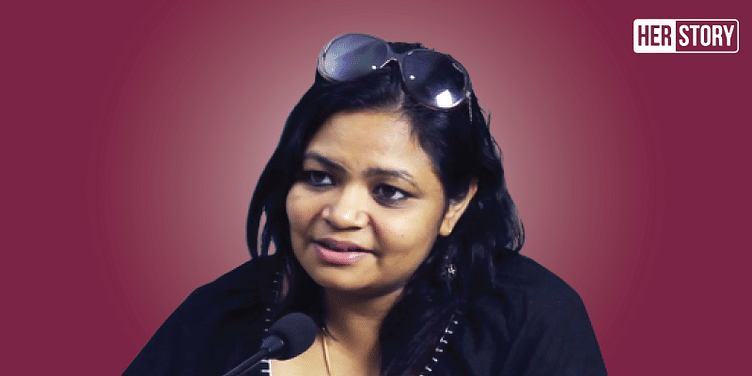 Chennai-based entrepreneur Deepa Aathreya defied all odds to start the School of Success, which aims at all-round development of students, parents, and teachers. She also drives a social movement for children called ‘Be The Change.’

When the going gets tough, the tough get going may be a cliché for some, but it exemplifies life itself for Deepa Aathreya.

The Chennai-based entrepreneur believes in the famous Paulo Coelho dictum, ““And, when you want something, all the universe conspires in helping you to achieve it.”

She says that’s exactly how her life has turned out – from success at 22, bankruptcy at 24, hardly any milk to feed her child, telling stories and selling balloons on a Chennai beach, and a second innings that scripted the School of Success – that she proudly runs today. Hoping to change a million lives.

“I was born obese, was a failure in school, was mocked for my weight, and called ‘baby elephant’. When I was in Class VIII, a teacher motivated me and transformed my life for good. I stood in the school elections and won. This win made me more responsible and I got out of my shell to bloom into a confident young girl,” she tells HerStory.

Deepa went on to complete her Bachelor’s in Arts followed by an MBA. She was interning with the RPG Retail Group when she got married to Aravind much against the wishes of both families. In nine months, their son was born and she quit her internship.

“I was feeling helpless sitting at home and felt guilty for passing on the financial burden to my husband. I wanted to contribute in some way. That’s when I received a call from my former boss requesting me to conduct a birthday party for her son. It was then that I realised I was good with children,” says Deepa.

The birthday party was themed ‘Go Green’ and saplings were given away as return gifts. This was 17 years ago, and the concept was quite unheard of but turned out to be a hit. “Slowly, my parent clientele increased and people started asking me to conduct summer camps. Later, I introduced a concept called ‘Leadership for kids’, helping children take charge of their lives at a young age.

When her world came crashing down

But within a couple of years, Deepa’s business and her world came crashing down. Cheated by a partner, life, she says, “came to a standstill’. “It’s like how it happens in the movies. We lost our home and car, and I pulled my son out of school because I couldn’t afford the fees. The only thought that was running through my mind was how to survive. I had to stay strong for my husband and son.”

With two babies (her daughter was also born by then) and no money, surviving every day was a challenge.

“I was looking for an option to earn money with a low investment. That’s when I thought of selling balloons. I sold them at Besant Nagar beach in the evenings. To “cover up” my family’s name, I started telling stories to children for free at the beach and would sell them balloons after the session. They became a hit and soon I had a huge fan club of children who would come to the beach to listen to ‘Deepa aunty’s stories’,” she says.

Soon, the media took notice of her unique concept and started writing about it. A correspondent of a school from Madurai read one of the articles and invited Deepa for a storytelling session at her school. And that’s when the idea of launching School of Success took off. Today, Deepa’s venture caters to over 2,500 schools. The programmes are for teachers, parents, and students.

So, it’s just not the storytelling. Deepa believes change begins with children and has therefore initiated a movement called ‘Be The Change’, a social movement where children drive real life social causes.

“This is a ‘classroom without walls’ concept where children learn leadership skills while working on social causes. Apart from this, we have also set up leadership clubs in schools where we conduct parenting and teacher training programmes.”

Even the second innings was not without incident, or in her case, accident. Deepa and her husband were involved in a head-on collision in 2011, in which she was badly hurt. It took 20 minutes for people to rescue her from the car which was in danger of catching fire owing to a diesel leak from the truck that had hit them.

Deepa shudders as she recollects those terrifying moments.

“Those 20 minutes were the turning point in my life. I prayed to God to keep me alive until I reached my children. My son was nine and my daughter was five and I wanted to kiss them goodbye. I promised that if God kept me alive, I would transform at least a million lives globally.”

Until her accident, Deepa had a thousand students. Now, School of Success has touched more than three lakh students across the country. She does not charge specific fees for her courses but leaves it up to schools to pay whatever they can within their budget.

“After my accident, I stopped chasing money. I focused on my purpose. Money has been automatically flowing since then,” she adds.

Deepa admits life has hit her hard many times but she has learned to enjoy the rollercoaster ride with a never-give-up attitude, no matter what.

“Apna time aayega – I have never doubted myself or my ability to bounce back. I am awesome the way I am because God makes no mistakes,” she adds.

She pawned her jewellery for Rs 40,000 to start an office supplies business that PM Narendra Modi talked about on Mann ki Baat

This woman entrepreneur is earning millions selling sarees via WhatsApp