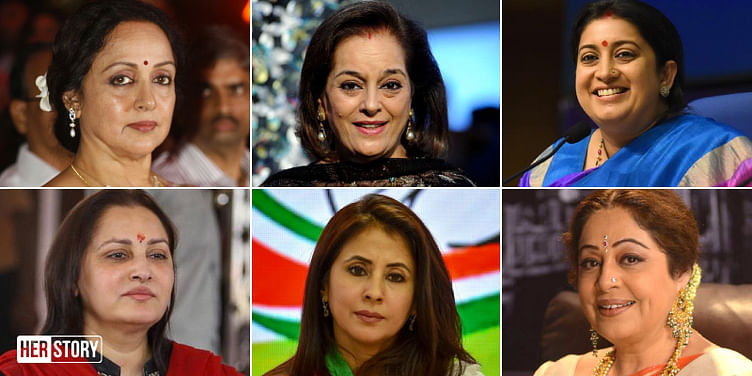 Here is a list of popular Indian women celebrities who contested the elections this year and whose fate at the electorate will be decided on Thursday.

The 17th Lok Sabha elections results to be announced on Thursday will seal the fate of 715 women candidates out of a total of 8,049 candidates.

Only a limited number of women have contested this year and out of these 715 women, a minuscule percentage comprises women celebrities and actors.

This see year saw actors like Urmila Matondkar enter the fray while the seasoned ones stuck to their former constituencies and familiar style of campaigning.

While these woman may have brought “star power” into the spotlight, it remains to be seen what they will do for the masses, if they win.

Here is a list of popular celebrities who contested the 2019 elections:

Will Basanti ride her way to victory. We are talking of Hema Malini, the well-known actor known for her feisty character Basanti from Sholay. Much derided for her infrequent visits to her constituency in the last five years, the actor has been the target of trolling for her inconsistent statements about her political work.

Hema’s tryst with politics started when she was elected in 2003 to the Rajya Sabha as a BJP representative. In 2014 she contested on a BJP seat and won the 2014 elections from Mathura. This year, she is taking on Rashtriya Lok Dal’s (RLD) Kunwar Narendra Singh in Mathura. It remains to be the seen whether the “Dream Girl” will translate the dreams of her voters into reality or else, her electoral ambitions, will just remain, a dream!

Jaya Prada ruled Bollywood from the late 70s to the early 90s. She entered the political scene in 1994 after joining the Telugu Desam Party at the invitation of its founder NT Rama Rao. She left TDP to join the Samajwadi Party on whose ticket she contested in both 2004 and 2009 Rampur in Uttar Pradesh and won.

In 2010, she was expelled the SP for damaging the party’s image. She broke away from the party with Amar Singh to form the Rashtriya Lok Manch in 2011, but the party didn’t win any votes in 2012 assembly polls. In 2014 she joined the RLD and got a ticket but didn’t win the election.

In March this year she joined the BJP and will be seeking her third term from Rampur contesting this time, against Mohammad Azam Khan, the Samajwadi-BSP candidate.

Urmila Matondkar who delivered major Bollywood hits in the 1990s and has been active  in television and declared her political ambitions by joining the Congress this year.

She contested the election from Mumbai North Constituency against BJP candidate Gopal Shetty.

Making this new chapter in my life official. Send me your Support and Blessings as I file my nomination today. 🙏😇 #AapliMumbaichimulagi pic.twitter.com/DcFipHDexd

Kirron Kher is a familiar face on television and has had a long movie and theatre career. She is married to actor Anupam Kher.

Kirron joined BJP in 2009 and was elected to the Lok Sabha in 2014 from Chandigarh. This year, she took on Pawan Bansal of the Congress.

Poonam Sinha, actor and the wife of veteran actor and politician Shatrughan Sinha and mother of actor Sonakshi Sinha recently joined the Samajwadi Party. She stood against BJP heavyweight and Minister Rajnath Singh of the BJP in Lucknow this year.

Nusrat Jahan is a model and a prominent actor in the Bengali film industry. She joined the Trinamool Congress (TMC) this year and contested from Basirhat in West Bengal where took on Pallab Sengupta of CPI, Quazi Abdur Rahim of Congress, and Sayantan Basu of the BJP.

Mimi Chakraborty is a well-known model and actor from West Bengal. She joined politics this year and is candidate from Jadavpur fighting  Bikash Ranjan Bhattacharya of CPI(M) and Anupam Hazra of BJP.

Popular Bollywood actor Moon Moon Sen joined the TMC in 2014, contested from Bankura and won. This year she has been making the headlines for her inane statements on West Bengal politics and her ignorance of major issues. She contested the Asansol seat for the TMC by taking on Babul Supriyo of BJP.

Smriti Irani started her career with television and is also a former model.She made her foray into politics in 2003 when she joined the BJP. In 2011 she was sworn in as a Rajya Sabha member from Gujarat. In 2014, she took on Rahul Gandhi in Amethi constituency and lost.

In 2014 she was appointed as the Minister of Human Resource Development in PM Narendra Modi’s Cabinet. However, due to much controversy and a cabinet reshuffle she was moved to the Textiles Ministry. From July 2017 to May 2018 she also took the additional charge of the Ministry of Information and Broadcasting. This year she takes on Rahul Gandhi in Amethi once again.

Tomorrow’s results will seal the fate of these women celebrities-turned politicians. The next five years will be the real test to see how they deliver on their promises.

Also read: Elections 2019: What women want from the new government