Meet the millionaire CEO of Booking.com who bikes to work and is breaking the glass ceiling, one role at a time 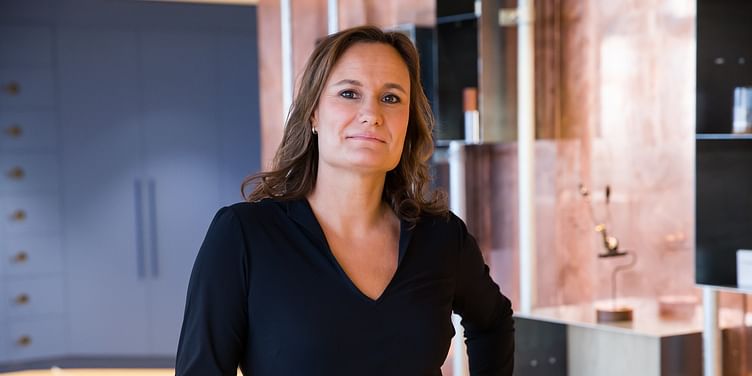 Gillian Tans became the first woman CEO of Booking.com in 2016. She actively encourages women to pursue careers in tech and aspire for leadership positions.

She rides a bicycle to work. She is soft-spoken, wears no make-up, and does not put on any airs as head of one of the largest tech companies in the world. To present the key note address to an audience of around 200 people from 80 different nationalities, she walks up to the stage in casual attire – a black T-shirt and trousers.

Her simplicity is not deceptive. It’s both inspiring and heart-warming. Gillian Tans, President and CEO of online travel platform Booking.com, is among the world’s highest paid CEOs, with a net-worth of $40 million. (Her salary in 2016 was $17 million.)

When HerStory catches up with Gillian at Booking.com’s swanky office in Amsterdam, she is excited to talk about not just the 23-year-old company where she has spent the last 16 years, but also about women making a mark on the tech scene, which has long been a male-dominated one.

“The gap for women in leadership roles is actually widening, not narrowing. It demands a lot of attention. Overall, you see more men than women in technical roles. There’s not even enough women that are studying these topics, so it’s not something that companies alone can fix.”

Gillian is an exception to this norm.  After graduating from Hotel School Middleburg, The Hague, and serving as Director of Sales at Golden Tulip Hotels, she joined Booking.com in 2002. In the last 16 years, she has served in various positions at Booking.com in global sales, operations, IT, content, and customer care. In 2011, Gillian was appointed as Booking.com’s Chief Operating Officer, and promoted as the Chief Executive Officer in 2016.

The 48-year-old mother of three has also been instrumental in bringing more women into technical roles, and has been leading quite a few initiatives at Booking.com in this regard.

In an effort to boost opportunities for women in tech, Booking.com offers grants of 500,000 euros in scholarships to undergraduate and postgraduate women studying computer science, engineering, technology, and mathematics. This is done in partnership with institutions including Cornell University, Indian Institute of Science (IISc), Bangalore, Oxford University, and Delft University of Technology in The Netherlands.

Gillian strongly believes social and economic change are driven by technology, and if women continue to be under-represented in technical roles, it may create a larger social divide and give rise to gender stereotypes.

“This is a real issue and we should all worry about the future. This is why it is high on the agenda for Booking.com, where we have 20 percent women in tech roles, which I think is probably higher than a lot of other companies. We manage to increase it every year, but it takes a lot of effort,” she says.

In a recent survey, Booking.com found that women still perceive their gender to be detrimental to pursuing a career in tech, with more than half (52 percent) attributing this to the tech industry’s largely male-dominated workforce.

Gillian worries that there aren’t many role models among women, who are either setting up their own company or becoming CEOs. “This may lead more women to think that this road is not possible. That’s why I keep pushing media also to showcase more such women (in tech),” she adds.

However, Gillian agrees that it is more complicated for women in board rooms to speak up. “I also sometimes need to push myself; my voice is low or I don’t want to interrupt.”

It was under Gillian’s leadership that Booking.com grew from a small Dutch startup to being the global leader in travel and tourism, and advanced its operations in more than 224 countries and territories.

Gillian recollects with a smile that the founders wanted to build the company from an Excel sheet. This was a time when few hotels were using technology. Gillian realised that they needed to expand to more countries, have people on ground, and help their partners to be successful by going online. She says:

“I believe it’s very important to set your ambition. If you set that high goal, you will always push yourself. We wanted to become the leader in Europe at a time when Expedia was bigger than us (in the continent). But I think setting a goal helps people to focus and see what success looks like. People want to work for a dream.”

While women rising to leadership and technical positions may be attributed to a generational change, Gillian’s journey shows that an organisation’s culture can also be the key to career growth.

She says that she lucky about the culture at Booking.com.

"It has been very diverse from day one because people are allowed to make mistakes. This has helped me try new things and not be afraid to fail. So, I have tried new things, failed, and learnt from it. I think it helps you do more than you think you can accomplish.”

She adds that since she has been involved with growing the business and the people around her have been working with for a very long time, they know what she has accomplished. (So her credibility is never questioned.)

However, every entrepreneur faces one question – is it lonely at the top? Not for Gillian.

“If I did, it means we don’t have the right culture, right? Because eventually you do things together. I play an important role in Booking.com. But I also have a team of people that helped me become successful. I don’t feel lonely and I think that’s very healthy,” she says.

Gillian is certainly someone who leads by example. When she is at the top, she gives a helping hand to more women to climb up the ladder. Because glass ceilings, after all, cannot hold forever.

Also read: How startups and India Inc are winning over Indian working mothers at the workforce