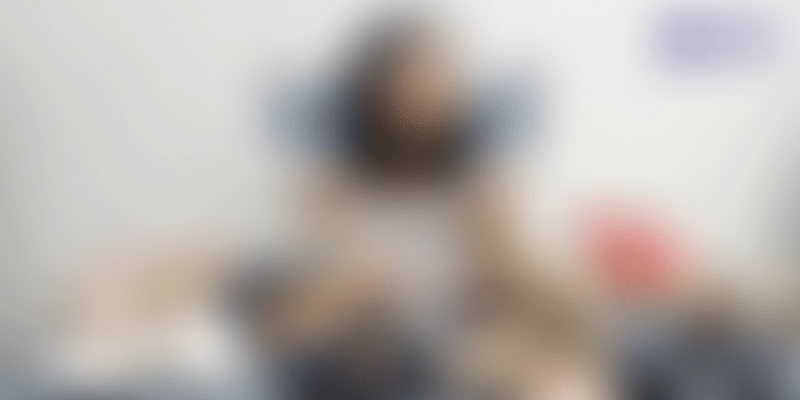 Pooja Apte-Badamikar’s startup BlinkGreen upcycles tyre scrap to make fashionable and durable footwear for men and women that is eco-friendly and sustainable.

It’s not always that one leaves a “comfortable” well-paying job in a multi-national to start up. But if the startup call is loud and clear, then women entrepreneurs like Pooja Apte-Badamikar heed it, and take the risk to start a business they are passionate about.

Based in Pune, Pooja combined her interest in entrepreneurship with wanting to produce an eco-friendly product that is both aesthetically pleasing and durable.

Pooja’s concept is simple. She uses tyre scraps to make fashionable footwear that she designs herself.

After completing her engineering in electronics and telecommunications, Pooja was placed in Capgemini where she worked for four years. While at her job, she also enrolled for an MBA in renewable energy. Mid-way she left her job, confident enough to start up on her own.

“After leaving my job, I started researching different methods of upcycling and came across tyre scrap. There is enough of it around and I was wondering what new thing can be done with it. Usually, waste tyres are used only in bigger industries as breaking it down (pyrolysis treatment) is very expensive and if not done in the right way, can cause air pollution. I thought upcycling them would help the environment as well,” Pooja explains.

Pooja thought of footwear as one of the means of using tyre scrap and began to research further. “Very few people are aware that in the olden days, aeroplane tyres were used to increase the durability of footwear. These days, only cobblers use bit to repair footwear. No one uses the scrap and it’s totally an unorganised sector,” she adds.

The concept gave rise to BlinkGreen and her own brand of footwear called Memital fashioned from two Sanskrit words: ‘memi’ meaning chakra or tyre, and ‘tal’ meaning sole.

Breaking down the process

Since the business is still in its initial stages, Pooja sources mostly truck tyre scrap from an 80-year-old ragpicker in Pune itself, which she gets in the form of strips. While the sole is made by the tyres, Pooja gets the colourful cloth stitched from tailors, and the entire footwear handcrafted by a few cobblers.

In October 2018, she presented two prototypes of Memital at Startup Yatra organised by Startup India in association with the Maharashtra State Innovation Society. Pooja won the Upcoming Woman Entrepreneur award and a cash prize of Rs 50,000 at the finals held in Nagpur.

Till now, BlinkGreen has produced 70 pairs of footwear. “After I reach the magic number of 100, I plan to scale up by selling them on my own website (still under design) and on ecommerce websites,” Pooja tells us, adding, “so far I have only made customised footwear and hope that will change soon”.

Interestingly, Pooja hopes to tap the huge fashion segment. She has already made footwear for boutiques that sell designer wear. Once she scales up, she will source the tyre scrap from the dockyards in Mumbai where they will be available in large numbers.

While sustainable innovation may be key to Pooja’s concept of making footwear from scrap, the benefits are also many. Besides being environment-friendly, the footwear is also durable and lasts longer than those available in the market. The only downside, if you have to search for one, is that it is slightly heavier than those made with other materials. The footwear is prized at around Rs 500 for each pair.

Pooja is cautiously moving forward in the startup world. She has invested the Rs 50,000 received into the venture, is in talks with a few investors, but plans to raise funding only when she is absolutely sure about scaling the business. She plans to start work on the official website and also hire interns from design schools to help with designing the footwear.

Memital’s 30 designs have all been made by Pooja herself. The venture has not been without its fair share of challenges.

“Getting the cobblers to handcraft the shoes was difficult. They felt it was no longer viable as it was in the past. Also, the industry is hugely male-dominated. When I visit the Thakkarbappa Wholesale Footwear Market in Kurla, Mumbai many advised me to have a bodyguard along with me. I am unfazed and, in fact, plan to source material and cobblers from there,” says Pooja.

The 26-year-old entrepreneur plans to aggressively market and distribute the products in the near future, and hopes to have the website ready by the end of June. “I am working on a push-and-pull model where I will manufacture and sell footwear to retail and via ecommerce websites and also partner with boutiques for customised orders,” she adds.

Pooja admits that initially she was worried whether she had made the right decision in leaving a secure job. “I had great faith in my concept and I enjoy what I am doing. Hopefully, I will soon see the fruits of my labour.”