The spirit remains the same, the ambition is bigger, says Safeena Husain of Educate Girls 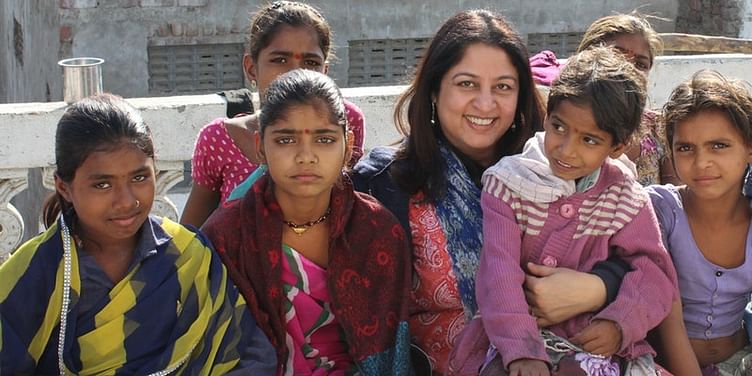 Safeena Husain speaks about the journey of Educate Girls, the lessons learnt from implementing the world’s first development impact bond in the education sector, and the dream to impact over 16 million children in five years.

When Safeena Husain stepped out of London School of Economics and headed to Silicon Valley to work at a startup, little did she know how short her corporate career would turn out to be. “I wanted to do something that I felt good about,” she recalls about her short start-up stint, during which she started to volunteer one day a week with two grassroots organisations and discovered a whole new meaning to life.

Nine months into her job, Safeena decided to switch to the development sector, first volunteering with International Development Exchange and then joining Child Family Health International, where she was the CEO and Executive Director by the time she quit to move to India to set up Educate Girls.

Over 11 years, the non-profit has brought 380,000 out-of-school girls into the education system and is now dreaming a bigger, more audacious dream.

Educate Girls has just become the first organisation in Asia to be named an Audacious project. The Audacious Project invites visionary social entrepreneurs and non-profits to dream bigger and to shape those dreams into viable and sustainable multi-year plans. The project invites donors to pool resources and work together in service of these ambitious ideas.

In this interview, Safeena speaks about the journey of Educate Girls, the lessons learnt from implementing the world’s first development impact bond in the education sector, and the dream to impact over 16 million children in five years.

Having worked in the health and social justice space during my years with International Development Exchange and Child Family Health International, I was also acutely aware when I came back to India in 2004 that I owed this big journey to my education. I grew up with a lot of difficulties—having seen poverty, violence, and so on—but I was able to overcome all that because of my education. That’s why I wanted to do something in girls’ education.

Girls’ education is the closest we have to a silver bullet to address some of the most pressing problems in society. It helps solve nine of the 17 global sustainable development goals. Once you educate a girl, she’s 200 percent more likely to educate her children. You can address so many issues with it– nutrition, malnutrition rates, stunting, immunisation, and so on. Climate scientists recently rated girls’ education as Number 6 out of 80 actions that can address climate change -- higher than electric cars and solar panels!

It’s also the right and the moral thing to do – it’s about justice and equality.

You chose to work in some of the toughest regions of India as far as girls’ ability to access education is concerned. What took you there?

When I decided to start working in India, I asked the Ministry of Human Resource Development to tell me the most challenging areas for girls’ education. They gave me a list of 26 critical gender gap districts, nine of which were in Rajasthan. I decided to go there since, from the very beginning, I was thinking of building a program that could be scaled to the most difficult geographies.

We started with 50 schools, went up to 500 and then covered an entire district. Since the government described the problem with the district as a unit, we made that our unit of replication too. We started adding more districts. The underlying factor working against girls’ education was patriarchy – it was a mindset issue and since mindsets feed off each other, it was not enough to work in a subset of villages; we had to work in all the villages. Only then would mindsets change, and the entire district shift to a different equilibrium.

What ambition did you set out with when you started Educate Girls in 2007? Does that ambition look different from where you are today?

When I started out the ambition was to take these critical gender gap districts and saturate them completely. Even today the spirit remains the same, but our ambitions are now much bigger. We want to work with 16 million children in the next five years—over the next five years, we’re going to triple what we have done in the last five years.

Earlier we would use government data, but now that we have 10 years of our own household-level data and we are using machine learning and artificial intelligence to be able to predict for our hotspots and do precision targeting. Adopting a results-based approach allows us to look at the sharpest tools to get to the result.

What does the journey to 16 million kids look like? What would it take Educate Girls as an organisation – internally as well as externally – to achieve this?

A lot of things will need to change. We will need to become growth-ready to scale exponentially; internal proceses and systems will have to be tightened. Adoption of technology—digitisation, automation—in our core programme and our support functions will form the backbone of this kind of scale and growth.

The biggest factor as we scale is our people. How do we ensure that everybody stays mission-aligned as we scale? As a founder, it is my job to ensure that our five-year vision and strategy is aligned to the cause. As a founder and at the board level, it is also our responsibility to ensure that there is no mission drift or mission creep.

How do the challenges faced by a founder change as an organisation moves from startup to scale-up?

At the early stage or the test phase, the problems I faced as a founder were very much about finding that early stage seed funding – and the right funding that knows that it is seed funding and will give the room to iterate, evolve, fail, rebuild and get stronger. That’s where Dasra helped me – I was their first giving circle. That three-year pool of unrestricted funding was a lucky break for us.

Talent was another challenge – nobody wants to join you when you’re starting up. I couldn’t even find members to join my board – I had to ask my husband to sit on my board till I found others! Training, capacity building, planning for scale, constantly iterating and codifying the human economics are all very challenging.

The challenges of running a scaled-up or scaling programme are very different. Predominantly it is about managing complexity: people, money, external relations. The challenge is to keep complexities to a bare minimum at this stage. You want the large ship to be nimble and dynamic but the way you do it becomes a lot harder.

As a leader, what I need to control is my personal time. At Educate Girls, we have created a structure that helps me focus more sharply and give a lot more time to critical areas such as strategy, planning and problem solving. We’ve built this organisation to be highly decentralised. We realise that the best solutions lie closer to the ground and have created systems that allow decision-making and course correction at the ground level.

As you grow, you also need to watch out for mission drift and remain a learning organisation.

What made you think of going the development impact bond (DIB) route? What would be the key learnings for Educate Girls and for the rest of the sector from this effort?

As we started scaling rapidly, I wanted to ensure that we were scaling quality and outcomes rather than activity. Whether we scale to 10 girls or 10 million, I wanted the DNA of the organisation to deliver to the result. That’s the main reason I went the DIB route.

We could achieve this because we were very focused on the target. The key was that everybody knew what the destination was. The teams closer to the ground knew exactly what they had to do to get to the target. So, it led to high decentralisation, accountability and financial and operational flexibility. It meant that we were not holding our teams accountable to the line item on the budget, we were holding them accountable to the result. The field teams also became much more data oriented as a result of working this way.

All this was possible because the funding was multi-year, flexible and focused on a result rather than an activity. In traditional funding too if the grants move from activities to outcomes, the results would be much higher. Donors will achieve much better results when they hold organisations accountable to results rather than prescribe what to do with the funds.

Do you see the pay-for-success model becoming more popular in the sector?

DIBs are very high-stake transactions. They are still evolving, and it will be a while before we see these instruments scale or become mainstream. What we need to do right now is take those elements of the DIB that get us closer to the results faster and see how they can be integrated into traditional approaches. That’s a more scalable model.

The DIB approach is great for R&D, it helps us find the shortest and fastest way to get to our results and then embed the learnings in our regular programmes. It encourages innovation and risk-taking; it allows you to iterate and course-correct. However, It’s not appropriate for all kinds of organisations. It is best suited for highly measurable programmes and fairly mature organisations.

How does Educate Girls support its leadership team?

The biggest bottleneck is the founder. So more than anything, over the past year I have invested in mentors and coaches, who help me be of best use to the organisation. Our team members also have mentors who they reach out to for guidance. Besides, our board members have taken on the role of mentoring some of our team members. We’ve made a conscious choice to build our board to support and protect our strategy and organisation.

What are the things that give you hope regarding girls’ education in India?

Despite all the challenges and barriers, every single girl I have met so far wants an education. No girl has ever said to me that she wants to be confined to the home, cooking, fetching water and grazing cattle. No girl wants to be married at a young age and raise children. She wants to go to school. This for me is the greatest source of hope!

This interview was first published on indialeadersforsocialsector.com. Read the original interview here

‘Are we suffering from a lack of imagination?’ asks Rohini Nilekani