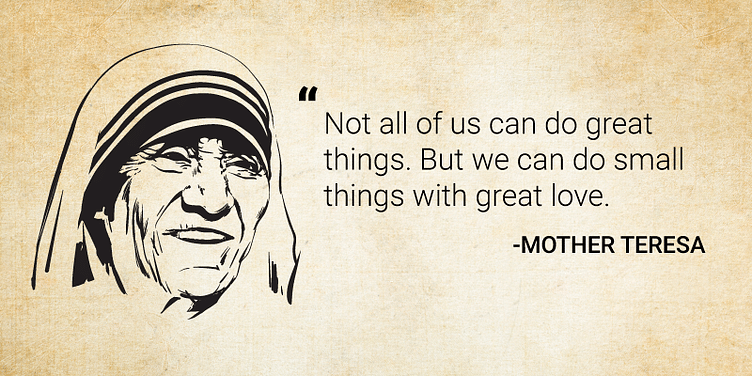 These inspirational quotes from Mother Teresa remind us why we need to pay attention to the small things because they make our life richer and meaningful.

Nobel Peace Prize winner, Mother Teresa was declared a saint in September 2016 by Pope Francis. She worked tirelessly with the poor in Kolkata and opened her heart to people who had no one to love and care for them. And her message of love, care, and service carried across not just India but across the world.

Born in Skopje, in North Macedonia, she spent most of her life in India. She founded the Missionaries of Charity, an organisation that ran hospices and homes for people with HIV/AIDS and leprosy and Tuberculosis.

At the time of her death, she was operating 517 missions in more than 100 countries dedicated to the poorest of the poor.  The missions also helped people with mobile clinics, soup kitchens, schools and more.

Recipient of multiple honours including the Nobel Peace Prize in 1979 and Ramon Magsaysay Peace Prize in 1962, she was an inspiration to millions across the world. Here are some inspirational quotes from her that remind us how our small acts have the ability to not just enrich our lives but the lives of others as well.

“Be faithful in small things because it is in them that your strength lies.”

“We shall never know all the good that a simple smile can do.”

“Spread love everywhere you go. Let no one ever come to you without leaving happier.”

“I have found the paradox, that if you love until it hurts, there can be no more hurt, only more love.”

“We ourselves feel that what we are doing is just a drop in the ocean. But the ocean would be less because of that missing drop.”

“Kind words can be short and easy to speak, but their echoes are truly endless.”

“Yesterday is gone. Tomorrow has not yet come. We have only today. Let us begin.”

“Love cannot remain by itself – it has no meaning. Love has to be put into action, and that action is service.”

Tell us which is the quote that inspires you the most in the comments section below?