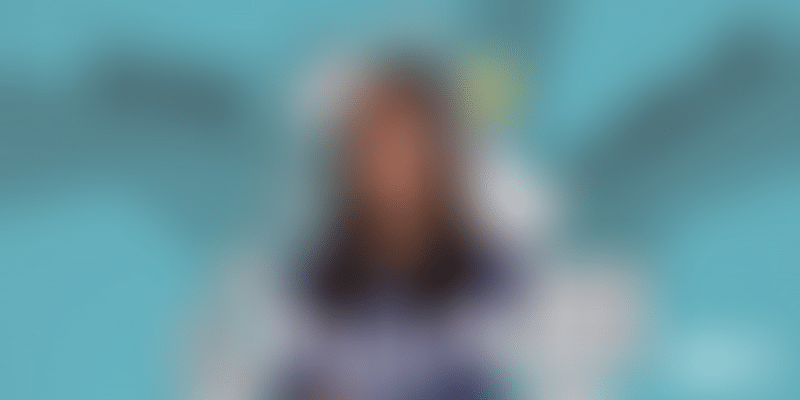 Samaira Mehta, the 11-year-old Founder of CoderBunnyz, has created a game that helps children learn coding, computer programming, and AI skills in an easy, fun manner.

A Class 6 student, Samaira Mehta already seems to be on top of her game. Of Indian origin and based in California, this 11-year-old girl in tech is an inventor, and has invented CoderBunnyz, a STEM coding board game to teach coding to kids between the age group of four and 10.

Samaira has taken Silicon Valley by storm and has been a part of more than 50 conferences. She has held 60 workshops that spotlight her board game, and taught over 2,000 kids, including over 50 “Google kids” at Googleplex, Google’s headquarters in Mountain View. The young girl also received a letter from the White House, from then First Lady Michelle Obama, for her work.

Recently, Samaira has also started another initiative, Girls U Code, to teach coding to underrepresented girls.

HerStory spoke to this young entrepreneur to know more about her invention, her love for coding, and how she plans to help more and more young people learn about new technologies such as artificial intelligence (AI).

It all started with a prank

Samaira’s interest in coding started with a prank her father played on her.

“He showed me something on his laptop that had one button and command that said: ‘press this if you are beautiful’. He asked me to give it a try, but when my mouse pointer touched the button, the button disappeared. I was like, how did you do that? Am I not beautiful, what’s going on in here? He said this was done by coding and then I was like ‘I want to do that too’ and that’s where it all started,” she says.

For Samaira, this combined two things she liked doing: computer programming and board games. She started learning how to code in 2015, and spent a year-and-a-half working on her first game.

“It was launched in 2017 and it trended #1 on Amazon shortly after launch. It was very well received in the market, schools, nationally and internationally,” she says.

She has sold 17,000 units of her game till date and is using the revenue to create some more games. A portion of the sales goes to homeless, a cause that is very close to her heart. The game can be bought and donated to children. Samaira has also been consistently pushing for more children to learn coding through her campaign "Yes, One Billion Kids Can Code".

A little help from family and friends

Samaira has a team of graphics designers, contract manufacturers, and operations.  Her parents, Monica and Rakesh Mehta, help with advertising and marketing while her brother, Aadit, helps test the games.

She credits the internet for making her dream a reality. “The internet is just amazing. You can get in touch with people halfway around the world. Several amazing graphic designers from Iowa, Ohio, and New Zealand helped give life to my ideas and rough sketches. Then there were manufacturers across the world who helped create the product. Technology today is powerful and, at the same time, kids are becoming more ambitious. We can help bring change and create things to solve the problems of our generations and the whole world to make it a better, safer and fun-ner place to live,” she says.

Samaira has also found support in Lorin Wilson, her educator and teacher.

CoderBunnyz is a comprehensive coding board game that simplifies computer programming concepts such as stack, algorithm writing, list, and queue.

My board game is touching upon a very powerful technology in the current era. Coding, computer science, and AI. The game teaches all the concepts used in coding and AI in a really fun, interactive, and kinesthetic way.

She has also launched CoderMindz, her latest game which teaches children AI concepts. She claims it is the first game of its kind, and has spent a year working on it.

Samaira keeps up with latest tech such as AI, Robotics, Programming, and Data Science.

“I read on the web (Google is amazing) and seek advice from my dad, who guides me in finding information about the new technology.” Her father designs AI devices.

One of the key challenges for Samaira has been creating awareness about the game. How to convince people that “coding workshops could be fun and exciting too”.

I have taught my brother and other friends at home by playing my board game and my mom said ‘why don’t you go do workshops’?  I went to some libraries; it was a bit of a challenge to get things started. The first library I went to said we already have an online coding programme. Then I went to another, and they asked me to ‘maybe,come back next year and we could discuss more’. I thought maybe my game was not good enough. But I never wanted to give up. Persistence paid off and the Santa Clara Central Park Library, one of the biggest in the area, was so excited to hear my proposal. That’s how my workshops started in libraries,” Samaira recalls.

The student has found great support in her parents and met some of the best minds in the Valley (in companies like Facebook and Google), and continues to be inspired by many of them.

“Some of the greatest programmers of all time have been women! Ada Lovelace, the world’s first computer programmer; Ida Rhodes, who designed the first computers to run the Census and Social Security; Margaret Hamilton, who wrote the software that put Apollo 11 on the moon…and let’s not forget Anita Borg and Grace Hopper.”

She adds, “There are many great women in the industry today and at Google and YouTube. There are too many of them to name but all of them are a huge inspiration!”

Samira also has other interests apart from technology. She is an active blog writer, singer, and composer. Five years down the line, she sees herself in high school working on choosing the right college to pursue higher education.

“And ‘Yes, One Billion Kids Can Code’ would be making inroads into all major areas and countries in all six continents.  I am also working on some new ideas currently, for board games and social good. I hope to see those come through and help the community in the next five years,” she says.

To all who think she is way too young, Samaira has just one thing to say.

I believe age is just a number. If you have an idea, no matter how old you are, you have the power to change the world.

From AI to Blockchain: the first woman to head IBM Research in Bengaluru is on a never-ending a...