From AI to Blockchain: the first woman to head IBM Research in Bengaluru is on a never-ending adventure 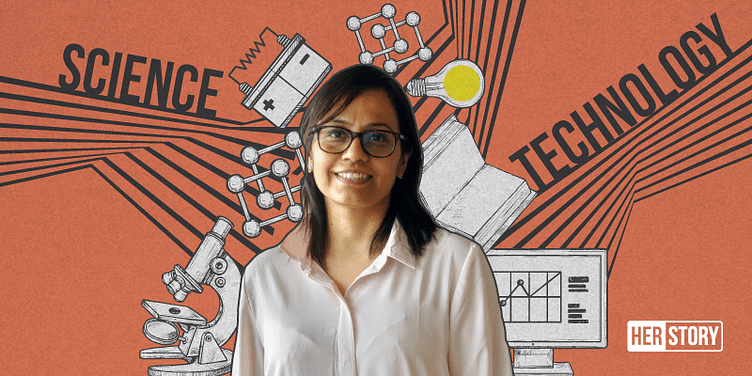 The woman who took over the reins of IBM Research in Bengaluru in March this year tells us about her ongoing research adventure, why AI and blockchain will transform the world, and why we need more women in STEM fields.

Gargi Dasgupta has been recognised as one of IBM’s Distinguished Engineers for her exemplary technological achievements. Her journey has been one of discoveries and full of adventure. Now, as head of IBM Research, she is using artificial intelligence (AI) to bring about change.

“I have been part of the IBM network for the last 15 years and it is an ongoing adventure. IBM has an environment that supports what you want to do. Internal mentorships, innovation, and networking helped me grow as a researcher in the company,” she says.

In a freewheeling chat with this woman in tech, HerStory discovered more about her journey with IBM, working at the forefront of AI and blockchain, and how she has been supporting other women at the workplace.

IBM Research is focused on building trusted AI on IBM’s scalable hybrid cloud platforms and applying it to various domains, including retail and agritech in India. While AI is being leveraged in many ways, Gargi points out that, at IBM Research, they want to move from “narrow AI”, where its use is restricted to single tasks and domains, to “broad AI”. But what is “broad AI” and how can it help industry?

“Broad AI can learn across different disciplines and augment human intelligence. This will unleash the power of AI to transform the world in dramatic ways. Our research agenda is anchored in three main areas: advancing the capabilities of core AI technologies in fields humans excel at, such as language, vision, and reasoning; embedding and operationalising these AI capabilities into businesses with a platform that is trusted and secure; and pushing the frontiers of the underlying infrastructure to optimise it for AI services.”

One area where broad AI will work efficiently is in the field of agritech. IBM Research is combining multiple global satellite-based information sources to “compute actionable agronomic insights (such as crop health stress alert, water stress, pest/disease risk forecast, etc.) for individual farmers at sub-acre level. This combined with data from The Weather Company and Watson has led to the launch of the Watson Decision platform for Agriculture.

In the retail space, it has developed AI technology and solutions that allow brick-and-mortar retailers to leverage core strengths like data to help them move into the new era of Retail 3.0.

Women in tech ready to return to work after break need support, nurture and mentorship: report

Evolving as a leader

As Director, IBM Research India and CTO, IBM India and South Asia, and with more than 15 years at IBM, Gargi is not new to leading teams, and says her style of leadership is people-centric.

"I am a people's person. I love talking and have developed that into my leadership style. Even today, if I have to take an important call, I first hear everyone out. I am a good listener. I then take the call on depending what's best. That's my style."

Growing up in Kolkata, Gargi had great role models in her parents: her mother was a doctor; her father was an engineer. “My father raised three daughters without ever showing that there was a difference in bringing up girls and boys,” she says.

After completing her computer science and engineering degree from Jadavpur University in Kolkata, Gargi moved to the US where she spent seven years and also worked with a startup. She also finsihed a PhD in Computer Science from University of Maryland, Baltimore County. In 2004, IBM Research was being established in Delhi and she did not want to miss out on a chance to work there.

“It was also an opportunity to do something for India. So my husband and I moved back to India. My son was born the same year.”

Her interview with IBM was an experience in itself. “I had not slept the previous night as my three-month-old son had been awake throughout. So, on a day of peak performance, I was like 'Oh my God, why am I even doing this to myself?' But it turned out well. One thing I learnt that day was how to work in the face of adversity.”

In 2011, she moved to Bengaluru where IBM Research was being set up. And though her PhD was in networking and distributed systems, she understood how IBM was shaping up and how software services were the next big thing. “I took one of my key strengths, analytics and optimisation in a networking system, and brought it to services. Along with IBM, I kind of reinvented my expertise; later on, analytics and optimisation became AI and blockchain.”

The new tech on the block

Gargi believes blockchain is one of the most disruptive technologies of our time. “Once in a decade, a technology comes that changes the roadmap and blockchain is it,” she says.

At IBM Research, blockchain is being applied to build new tech. Gargi explains how this could work.

"I believe blockchain, and the new business models that are being shaped by technology, could democratise access to data and improve trust and accountability across our digital economy. At IBM Research, we also focus on developing technology that achieves all trust and accountability in a privacy preserving manner. This will have major positive benefits for business and society."

A big part of working with tech and research is also accepting and overcoming failure. “I think in research, the success-to-failure ratio is quite skewed. For 10 things you do, two of them might be successful. And this is what I initially struggled with,” Gargi says.

“I realised that it really doesn't matter because the learning that you get from a failure can actually help you achieve success on the next one. And that's been my maturity journey. I don’t fret; I realise that we should do is fail fast and move on to the next one,” she adds.

Girls and women in STEM and returnships

A firm believer in the power of mentorship, Gargi can’t thank her mentors enough, be it those at grad school or in IBM. And, she is returning the favour.

How do we attract more girls and women into STEM fields? How do she think we can address the abysmally small number of women in tech?

“At IBM we offer working women on a break a chance to reskill and enter the workforce. It starts with an internship, after which most of them are absorbed back into the company. We did that last year with two women and in return we got loyalty and engaged employees,” Gargi says.

Making people a part of your success

Which brings us to the proverbial question: how does she manage it all? The trick is to never segregate work and home; integrate them, Gargi advises.

“When the children were young, it was always a big challenge. Every day you have to make decisions and prioritise. And throughout my journey, I made sure I had support, I made sure I did not have to kill myself at work. I did prioritise my kids at that point. There were questions like 'Am I spending enough time with them?' and a lot of guilt.”

Her optimism shines through when she says that it always gets better. “All you have to do is hang in there, talk to a lot of people who have gone through the same things, and you'll feel that you are not alone. I asked my mum for help. Being in India, I think that is the luxury we have. Right now, I am happy to say that my two boys and my husband are probably my greatest fans. They cherish my success.”

At the workplace, she says that encouraging people to do their best on the tech front and trying new things makes life very interesting. "If I take a risk and that works out, there's nothing bigger than that.”

This woman in tech knows how to be at the top of her game and enjoy it too! Adventure beckons, at every step!

The STEM Sisterhood: meet the 6 women who are encouraging young girls to take up careers in thi...