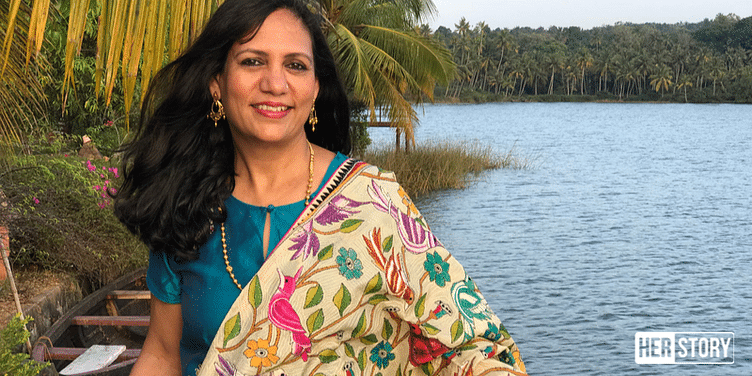 Entrepreneur and army wife Farah Khan has been instrumental in the revival of the traditional art of kantha. Her ‘Kantha by Farah Khan’ empowers craftswomen in West Bengal and features exquisite and intricate embroidery on stoles, dupattas, and sarees.

Farah Khan was raised at a time when the most respectable profession for women was medicine. Accordingly, she got admission into Aligarh Muslim University on the path to becoming a doctor. Unfortunately, she fell ill and had to drop the idea and, instead, enrol for a BSc Honours in Science from Bombay University.

This was in the early 90s and Farah did not even for a moment imagine that she would one day be largely responsible for the revival of kantha, an embroidery craft mostly associated with the eastern regions of India like West Bengal, Odisha, and Tripura.

Today Farah is well-known entrepreneur whose artistic expression, which has transformed the traditional kantha into a unique art form with a contemporary flavour, also empowers the lives of hundreds of craftswomen in the process.

After completing her graduation, Farah got married, her husband was in the Indian Army and her in-laws were not too keen that she go out and work.

However, her fashion-conscious mother, who was an expert in textiles and fabric, seemed to have passed on the gene to her daughter. Farah became well-known in army circles for giving old sarees a modern twist with limited resources.

“When my husband was posted in Kargil before the war broke out, I could live for four months with him. I used to cook food in the camp and kept the soldiers engaged in learning new recipes. While there, I was also drawn to the lives of Kashmiri artisans, their beautiful embroidery, and pashmina shawls. I decided to source the best shawls and start a business of my own,” she recounts.

She also says it was beginner’s luck when she was invited by the American Telugu Association in Hyderabad to take the art to Atlanta. At the event, whatever she had taken along with her sold out quickly.

Her business started doing well, but, in 2004, Farah had to follow her husband who was posted to Panagarh, a remote town in West Bengal. “This caused a slowdown in the business as Srinagar was far away, there was limited internet, and continuing the business was very tough,” she adds.

A chance visit to Shantiniketan and the surrounding villages introduced Farah to artisans specialising in kantha.

“I found out that kantha, even though it came with a 1,000-year-old history with mentions in Vedic and pre-Vedic literature, was not as popular as it should be. I saw women artisans in despair; their art had almost died out,” she says.

Within a year, Farah had learnt the intricacies of kantha and was singularly focused on its revival. She also developed a close bond with the women artisans and earned their trust. And, thus, ‘Kantha by Farah Khan’ was born.

“I received a lot of encouragement when I started selling kantha sarees, dupattas, and stoles in army circles. I had put in all the money I had made with the pashmina shawls but was still raring to go,” Farah recalls.

As luck would have it, Farah’s husband’s next posting was at Kolkata, a rarity as one never gets posted to a place in the same State in succession.

To her dismay, not a single store in Kolkata exclusively stocked kantha in the late 2000s. She then decided to go on an awareness drive and started speaking of the craft at various councils and events.

The Army Wives Welfare Association recognised her passion and offered her a store inside Fort William in Kolkata and, since then, there’s been no looking back for Farah.

“In five years, my store became famous among all the three armed forces and my store became a must-visit for all those were passing through Kolkata. In parties, most women started wearing Kantha by Farah Khan pieces. It was no more boring and outdated in our circles. My friends called me Kantha Queen,” she laughs.

Farah’s efforts helped revive the craft. “When I started out there few master karigars. Now they have honed their skills. I buy the silk and the women do the embroidery by hand. A single dupatta takes two-three months to make,” she adds. She has 600 women registered for kantha work with her.

Farah supplies to stores all over the world, museums in Switzerland, five-star hotels and is one of the leading sellers on jaypore.com.

“The biggest hurdle was to make the karigar aware that their craft was timeless and to start taking pride in it. Today, their confidence and self-esteem has improved and they are not as poor and hungry as they used to be. They have started dreaming big and hope to do something for the craft community,” she says.

From an initial investment of Rs 10-15 lakh, Farah’s turnover has crossed around Rs 1.5 crore.

Farah’s and her family has settled down in Kolkata, which makes Farah’s commute to the villages easier.

“My vision is to revive traditional weaving in West Bengal. The number of weavers has reduced from 1.5 lakh to just 65,000. There are not enough schemes for them to continue their craft. Along with support from my husband, I want to help them in whatever way I can,” she says.

There are also plans to open a physical store in Kolkata exclusively for kantha products.

How this woman entrepreneur built a Rs 100 Cr company with a bank loan and a dream – the story ...