In her new book, Apurva Purohit tells us how to be a boss, at work and in life 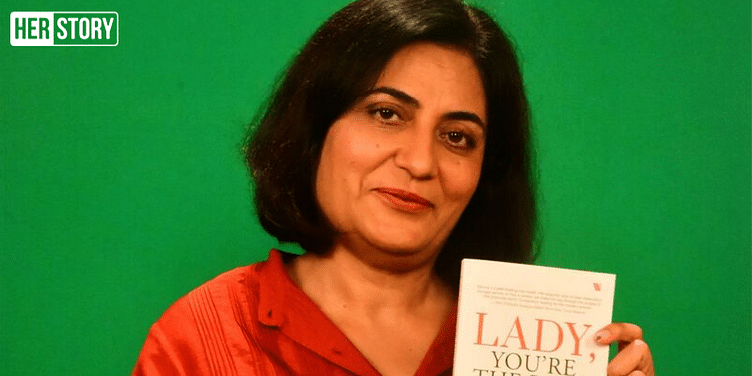 ‘Lady, You’re the Boss’ draws from Apurva Purohit’s personal experiences, and reveals how women minimise themselves, suffer from the imposter syndrome, and settle for less.

After the success of her book, Lady, You’re Not a Man, Apurva Purohit, President of multi-media conglomerate Jagran Group, has just released an exciting sequel. Lady, You’re the Boss seamlessly weaves in real-life anecdotes to provide tips on dealing with discrimination at the workplace.

Apurva has over three decades of experience in the media and entertainment industry. As a powerful voice for women, she has interacted with over 10,000 working women to empower them to navigate their way in a contemporary work environment. She actively mentors entrepreneurs across sectors on building and scaling businesses and shaping inspirational work cultures.

Lady, You’re the Boss draws from her personal experiences where she talks about how women minimise themselves, suffer from the imposter syndrome, and settle for less than they are capable of, because of feelings of inadequacy and a desire to feel needed and liked.

Apurva suggests ways of overcoming these issues and clearing the path towards personal and professional success through anecdotes and examples.

She presents an essential action plan for women where she urges us to believe in themselves, resist stereotypes, and call out biases. Her book is essentially a guide on how to realise your full potential to move forward in life and at the workplace.

In a conversation with HerStory, Apurva speaks about her new book, how to formulate an action plan, and what makes a successful woman leader.

HerStory: What idea are you taking forward in your second book, and how different is it from your first one?

Apurva Purohit: I wrote my first book, Lady, You’re Not a Man, to encourage and tell younger women that they too can have it all with the right mix of attitude, support, and perseverance. The second book, Lady, You’re the Boss, addresses women who have stayed the course and moved up in their respective fields. This is because I discovered that women face a different set of challenges and biases as they progress up the corporate ladder or proceed to reinvent themselves at a later stage in their lives. Some of the social prejudices are subtle but extremely tough to break through, and some exist subconsciously in the minds of women themselves, when they unknowingly minimise themselves, suffer from the imposter syndrome, or adjudicate poorly on their own behalf. I wrote Lady You’re the Boss to tell all women that there are vast and unconquered opportunities still ahead of them and their best version is yet to come.

HS: Why does every woman need an action plan for the present and the future?

AP: When life throws challenges at you, you can either take them up and try to win, or dodge and choose to repent this fact later in life. To ensure you win the battle, however, you need to take accountability of your life and take control of circumstances around you. Naturally, to take control of anything, you need an action plan, lest you flit and float through life, and become a bystander to your story. Also, the need of an action plan is not limited to just women. Men, too, can have their action plan to prepare themselves for life.

HS: What are the key takeaways you want readers to take from the book?

AP: The book has two sections. Each of these has its own takeaways. While the first part tells you to believe in yourself, break the self-imposed glass ceiling, and keep persevering to overcome the subconscious biases that exist around you. The second part talks about how to emerge as a strong leader by defining the important attributes of an astute leader, especially in today’s complex world.

HS: What are the real-life stories in the book that struck a chord with you?

AP: My favourite story is in the chapter ‘Somebody’s Something’, and it is about my mother. My first book was dedicated to her, but she was not too pleased about the dedication because it simply said – To Mummy. When she saw it, she grumpily called me to ask, “But where is my name?” And this brought home to me a revealing and startling point about how quickly women get reduced to being addendums to the people in their lives. They morph from being individuals, to becoming ‘Vivek’s mom’ and ‘Mrs Kapoor’s daughter-in-law’ and their entire life gets telescoped into one brief appellation. Just like that, in a jiffy, they get reduced to merely being somebody’s something. The truth is that it’s just not a loss of name but a much bigger loss for women - the forfeiture of individuality that takes place after they get married.

AP: Leadership is gender-agnostic, so the guidelines to be a successful leader are almost the same. But when one asks, ‘how can a woman become a successful leader?’ the answer varies slightly. Confidence is the first and the foremost thing that a woman needs to incorporate in her attitude before embarking on the journey to be a leader. This is followed by battling the imposter syndrome and not allowing oneself to be minimised, which is an unfortunate character trait women have; and dealing upfront with the biases around being the only woman in the room. The sooner she overcomes these stereotypes, the quicker she is prepared to be a successful leader.

HS: What kind of qualities do you think a woman boss can bring in to the workplace?

AP: Women are born with all the essential traits of a good leader - they’re driven, passionate, and are naturally collaborative as well as nurturing. These attributes play a major role in building winning teams and creating successful organisations. So, a Boss Lady sets a benchmark for younger women who have just embarked on their journey in the corporate world. And hence, she paves the way to create a workplace that promotes gender parity. At the same time, she ensures that the voices in the boardroom are given equal opportunity to be heard even if those differ from her opinion. In a nutshell, a woman boss contributes to the overall growth of her team and department that eventually translates into the growth of the organisation.

Capable or incompetent - what you tell yourself becomes the truth: Rachel Hollis, best-selling ...

From embracing criticism to getting enough sleep: 10 lessons from Arianna Huffington's journey