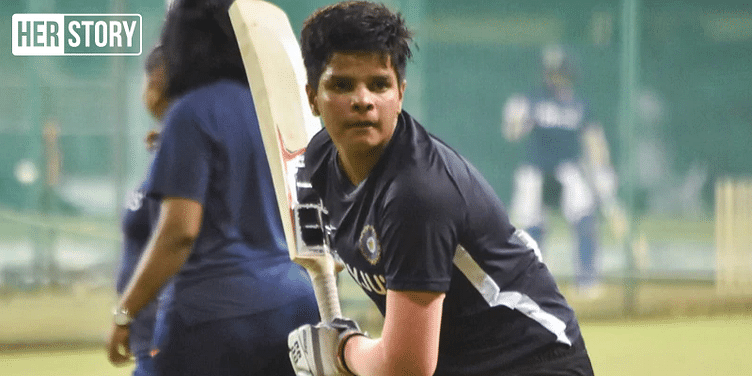 The batting sensation who made her debut for India against South Africa in the ongoing series had to cut her hair short and pretend to be a boy to play cricket in her hometown.

Shafali Verma has emerged as the new wonder kid for Indian women’s cricket. The 15-year old batting sensation starred in India’s 51-run win over South Africa on October 1 at Surat. She hit an entertaining 46 off 33 balls to help India achieve a 2-0 lead in the series against the Proteas.

The debutant’s father Sanjeev Verma has revealed that Shafali had to disguise herself as a boy to play cricket. Her father used to take her to play cricket with local teams in the neighbourhood, but none accepted Shafali because she was a girl.

“Most teams refused to play against her. They said she could get hurt and that I would complain if that happened. Even when I insisted she was my daughter and I was okay, most didn’t agree,” he said.

Her father decided to get her a ‘boy’s haircut’ in order to trick the local teams to allow her to play with them. This trickery allowed the youngster to practise cricket regularly on the weekends.

After this, the Verma family faced other barriers for their daughter to play cricket. Neighbours and relatives would often discourage and taunt Shafali’s parents for letting their girl play the game.

Shafali’s father - a jewellery maker in Rohtak, Haryana - decided to get her professional training. But another barrier appeared when academies in Rohtak refused to let a girl train. After meticulous searching, he finally found an academy that allowed girls to practise. The committed youngster would then cycle 8 km every day to for practice. Even here she would practise with boys, get hit and bruised but that didn't stop her from continuing with the game. Inspired by their sister, Sahil, 17 and Nancy, 6 are also working hard to rise through the cricketing ranks.

Shafali made her debut in the current T20 International series against South Africa becoming the youngest player to debut for India in T20Is. The specialist opener is known for her power-hitting prowess and was picked in the India squad on the back of her run-amassing domestic season. In her third season with Haryana, she accumulated 1,923 runs, including six hundreds and three half-centuries. Mithali Raj’s retirement from T20I accelerated the pocket-sized powerhouse’s inclusion in the national team.

Mithali Raj and England batswoman Danielle Wyatt have praised the cricketer with the latter calling her ‘a superstar in the making’. Shafali was part of the Velocity team in the 2019 Women’s IPL where she opened the innings with Danielle and took on the international bowlers without fear.

Despite her disability, former TN under-19 women's cricket team captain is inspiring millions