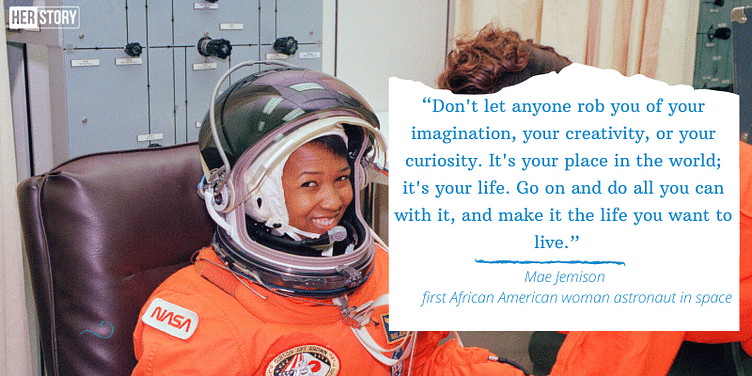 Here are quotes by pioneering women in STEMM to inspire to follow through your dreams and desires.

STEMM (Science, Technology, Engineering, Mathematics, Medicine) fields are predominantly male-oriented. But, interestingly, women were the first computer engineers, software designers, mathematicians at NASA, and many other pioneering fields. Today, even though more women are graduating with technical and science degrees, from the workplace to science labs, women remain a minority.  To encourage more women to take on roles and leadership positions in science and tech, various initiatives like Girls Who Code are being implemented.

Some of the first pioneers in tech are women like Grace Hopper and even today, these women in STEMM continue to inspire more women to take the path less travelled.

So if you are looking for inspiration for that final nudge to follow your dreams, here are quotes by women in STEMM:

"If you know you are on the right track, if you have this inner knowledge, then nobody can turn you off... no matter what they say." - Barbara McClintock, cytogeneticist and winner of the 1983 Nobel Prize in Physiology or Medicine.

"Science, for me, gives a partial explanation for life. In so far as it goes, it is based on fact, experience and experiment." - Rosalind Franklin, chemist, molecular biologist, and one of the key figures behind unlocking the structure of human DNA.

“Don't let anyone rob you of your imagination, your creativity, or your curiosity. It's your place in the world; it's your life. Go on and do all you can with it, and make it the life you want to live.”  - Mae Jemison, first African American woman astronaut in space.

"I was taught that the way of progress was neither swift nor easy." - Marie Curie, first woman to win a Nobel Prize, and the only person to ever win a Nobel Prize in two different sciences.

“All sorts of things can happen when you’re open to new ideas and playing around with things.” — Stephanie Kwolek, chemist who invented Kevlar and winner of the Lavoisier Medal for technical achievements.

"Courage is like — it’s a habitus, a habit, a virtue: you get it by courageous acts. It’s like you learn to swim by swimming. You learn courage by couraging." - Marie Daly, the first African-American woman to earn a PhD in chemistry. She discovered the relationship between cholesterol and clogged arteries.

“I increasingly believe, and remind myself, that my ideas are valuable. People will listen to and appreciate them more based on my confidence conceptualizing and sharing them. Only one idea can be chosen, but everyone has to feel confident to share theirs because it contributes to the final outcome.” - Tracy Sun, former research scientist and Founder of Poshmark.

“Humans are allergic to change. They love to say, ‘We’ve always done it this way.’ I try to fight that. That’s why I have a clock on my wall that runs counterclockwise.” - Grace Hopper, pioneering computer scientist.

“I didn’t want to just know the names of things. I remember really wanting to know how it all worked.” - Elizabeth Blackburn, Winner of the 2009 Nobel Prize for Physiology or Medicine.

“I tell young people: Do not think of yourself, think of others. Think of the future that awaits you, think about what you can do and do not fear anything.” - Rita Levi – Montalcini, Italian neurologist and 1986 Nobel Prize winner in Physiology.

The STEM Sisterhood: meet the 6 women who are encouraging young girls to take up careers in this field