Meet Lani Zena Fernandez, a Puducherry-based biker who is revving up for an exciting career in motorsport 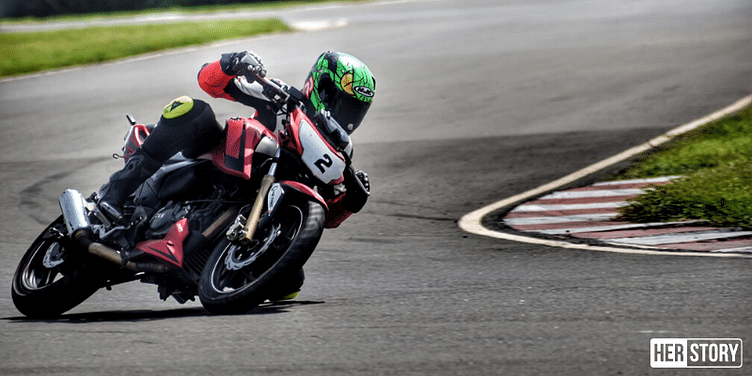 Lani, 22, is riding her passion, literally. In 2018, she took part in the TVS One-Make Championship and also made news in the biking community when she raced with a broken finger, and her corner-riding skills were copied by others. Here is the story of the new woman on the circuit.

It was the final round of the Indian National Motorcycle Racing Championship 2019 in Chennai. In the qualifying session, a day before the final, rider 97 Lani Zena Fernandez crashed out of the race.

It left her with a fractured left thumb that would in all possibility put an end to her season, with just one race unfinished. The crash would also mean being away from the circuit for a year, with the next season also in doubt. For the next three months, she would not be able to move her left hand at all and doctors advised complete rest.

Race day arrived. And Lani was on the sidelines with her team. It was a despondent group that had almost given up on the championship. However, Lani was not done yet. Just before the race, she taped her left hand completely, put on her race suit and with the help of a colleague took her place on the grid.

Lani rode with only one functional hand; she couldn’t change gears because her left hand was wrapped up completely but she drove calculatedly. She knew she couldn’t push too much as it might aggravate the injury and kick her out of the race.

For the first few laps, she was in the lead but had to fend off the others. In what can be termed an incredible feat, she finished second in the race, but disaster struck and she was disqualified.

Her bike was missing the secondary gear lever chain, which protects the rider.

In the haste of deciding whether to race or not, the team hadn’t realised that the chain was missing.

Lani relieves the moment, “It was a turning point. It taught me so much. The entire season I didn’t believe in my abilities, but that day I performed my best laps with a broken finger. The biggest learning was that hard work never goes in vain,” she said reliving that day.

The group claimed a rival team had removed and reported them - a part of the politics of the sport, that Lani seems unfazed by.  “It’s okay. It happens,” she says optimistically.

Lani Zena Fernandez was five years old when she started racing go-karts. Her dad was a racer too. The childhood interest faded over time and Lani got busy with her studies.

She shifted to Bengaluru from Puducherry to pursue a triple major in Journalism, Psychology and English from Kristu Jayanti College. She also started riding bikes to college every day.

From driving to college to racing on tracks

At 16, her father taught her to ride a bike and they would go on long rides together. “My longest riding distance is from Goa to Bengaluru on a Java when I was 19,” she says proudly.

In 2018, the TVS One Make Championship came to town to select the next generation of racers for the annual championship to be held at the Madras Motor Race Track(MMRT)  in Chennai. Lani decided to try her luck there. Seventeen girls from the preliminaries made it to the finals at MMRT, and Lani was one of them.

In the first round, Lani hit her first setback. She crashed out of all three sessions, leaving her with zero points on the championship table.

During the second round Lani met her current coach Mohamed Hanif of Speed DemonZ Racing. Hanif, a former car racer, took Lani under his wing. Lani finished in the fourth position overall in the championship in her debut season, proving that she had more than just potential.

Nothing comes easy or free

Watching Michael Schumacher, the seven-time Formula One World Champion on TV, Lani’s desire was to become a car racer. However, this ‘Schumi’ fan turned into a Marc Márquez motorhead.

Initially, her father was uneasy with her dreams of turning professional. “As I started performing better, he got addicted to racing more than me,” she says with a laugh. “He now wants me to drop everything else and concentrate on racing.”

However, she continues to pursue her Master’s degree in Psychology from Puducherry University and works part-time from home for a small company to cover some of the cost of racing.

“For every championship, we need anywhere between two and a half to three lakh rupees, which includes the bike, expense on tires, fuel, logistics, training costs, and more,” she says.

Also the Level 1 certificate - licence for racing which is issued by the Federation of Motor Sports Racing Clubs of India that governs motor sports in India - alone costs Rs 30,000 to Rs 40,000. Lani was fortunate to receive the certificate without any expense as TVS got the licence for racers in the One Make Championships.

Lani adds, “There is no return on investment for racers. Prize money for each race is Rs 7000 for first place, Rs 5000 for second, and Rs 3500 for the third place which doesn’t cover the cumulative cost of one race. If we crash in a race we need to change our spares, new sets of tyres for every race, the fuel we use is specifically used for racing, which is also very expensive.”

She says the onus is on the federation to at least ensure that racers can break even, so that they do not drop out and are encouraged to continue.

Hanif, the team principal of Speed DemonZ Racing elaborates, “The reason girls don’t get return on investment is because they only have one race per round, whereas boys have two races in the National championships.”

Increasing the number of races would mean a bigger prize money and encourage girls to participate in the sport, Hanif adds. “Girls come from different states and they get only one race, in such a case there is minimal scope for development of the sport and the riders.”

Life in the fast lane

Lani is thankful for all the support she has received, especially from her family. “Apart from my father, my mother has also been encouraging me since day one. Even when I fall, she tells me ‘I am better than this and better than anyone else on the track’” she added.

Motorsport is unique as it does not have a gender restriction, men and women can race together..

Lani and Speed DemonZ are gearing for the next season with the aim to compete in the open category along with men. In a very short time, Lani has established herself in the biking circuit as one of the most exciting talents.

“Hands down, she is the best girl rider out there (in the biking circuit). Her hard work, her determination, and her never back down attitude are on another level. She is always the one breaking the limits, and going beyond,” Hanif says.

Lani’s ultimate goal is to make it to the MotoGP. “I hope I can make it, let’s see,” she adds.

Meet Anitha Kholay, scorching everything from ramps to racetracks