This Christmas season, meet 5 women with a passion for pastry 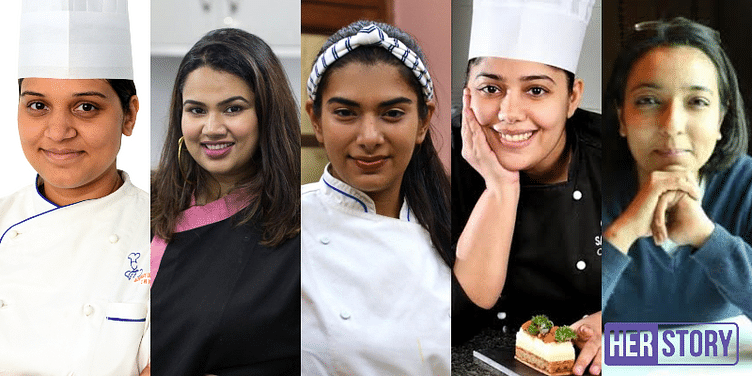 When Christmas comes around, delving into some pastry and plum cake is a must. This festive season, meet these five women in India who have a passion for baking and are bringing magic around town.

The feeling of walking into a bakery and smelling that delicious mix of chocolate, vanilla, cinnamon and more is one of a kind. Now that it’s Christmas time, bakeries are buzzing, offering unique and especially scrumptious selections to satisfy your sweet tooth cravings.

This festive season, meet these five women in India who are making magic in their kitchens with their top notch skills and passion for food.

Eureka Araujo's passion for baking started as a child, watching her mother who was a home baker in Goa. Her career started at the Umaid Bhawan Palace in Jodhpur where she was a junior sous chef.

Today, she is a Senior Pastry Chef at the Academy of Pastry Arts in Mumbai where she heads all kitchen operations.

On her journey so far, Eureka tells HerStory,

"It’s been a tough but an exciting journey. Pastry has always been my passion. I cannot see myself doing anything else. There have been a lot of hurdles but nothing I couldn’t jump over."

Over the years, Eureka says there has been an increase in the number of master chefs visiting India from around the world, there is more availability of imported and high quality ingredients, and more students and chefs have been able to participate in world championships.

Eureka herself has won a number of awards, her first being in 2011 at the All Goa Cake Decorating Competition. She was also crowned India Pastry Queen 2017 and went on represented the country the World Pastry Queen Championship 2018 held in Italy.

Pooja Dhingra's first memory of baking is making brownies with her aunt when she was six years old. She continued baking for friends and family, and took goodies for classmates at school.

Her passion for food deepened as she went on to help her parents with their food businesses - tasting menus at her father's Mexican restaurant at 12, and assisting her mother in her chocolate business.

Yet, Pooja was swinging in between her love for baking and choosing a reliable career. She initially decided to study law, but in just two weeks, realised it wasn't her calling and moved to Switzerland to study hospitality management.

Finally, with a diploma in French pastry from Paris, Pooja embarked on her entrepreneurial journey at 23, with Le 15 Cafe & Patisserie. Today, the chain has five branches across Mumbai.

In a previous interview with YourStory, Pooja spoke about her journey:

"Being a young girl in a male dominated industry was not easy. Even finding suppliers or real estate agents that wanted to work with me was tough. As the years have gone by, the challenges keep changing, but I think being a woman makes me a better and more intuitive leader."

[WATCH] As a cake artist, Joonie Tan combines her love for baking and art

Mandakini Gupta started out as a television journalist with no skill in baking. But she slowly developed a liking towards the craft, and decided to quit her job and work on becoming a full time pastry chef.

In a previous interview with YourStory, Mandakini said,

"It took a lot of thinking and planning, and proving to myself that this is what I really wanted to do; which meant actually going and working in a professional kitchen as an intern before I was convinced that I loved baking enough to work 12 hours a day in a kitchen and still feel happy. Only when I knew that I was capable of doing this, did I quit my TV job."

She then found an internship at the Park Hotel in Delhi, which marked the beginning of her new career. She spent hours scrubbing fridges and cleaning up here and there, preparing to learn how to become a pâtissier.

Without an official degree in culinary arts, Mandakini found work in commercial kitchens like Indigo Deli in Mumbai and WD50 in New York. She then went on to do a foundation course at the French Culinary Institute in Manhattan for three months.

Upon returning to India, she further improved her skills at pastry chain L'Opera, and eventually opened up own - Smitten Bakery.

With a delectable selection of treats for the sweet tooth like tarts, cookies, cakes and a lot more, the bakery made its mark when it received an order for handmade artisanal chocolates for Shahid Kapoor and Mira Rajput's wedding in 2015.

Bani Nanda discovered her passion for baking in the second year of her physics course at Gargi College, Delhi. After completing her degree, she moved to Paris to follow her dreams, and studied pastry at Le Cordon Bleu for nine months.

She found an internship at Dalloyau in France - a patisserie dating back to the 1680s - where she sharpened her skills. She then returned to India and joined The Oberoi as a commis chef, and worked there for a year and a half.

In 2015, Bani decided to launch her Miam Patisserie in Delhi, which specialises in French desserts, cakes, macarons, tarts and other traditional pastries.

For the love of baking: Saritha Subramaniam’s story

Sanjana Patel was confident about pursuing a career in baking from an early age, and graduated in both Food Management from London and Chocolate Technology from Germany. She also showcased her skills at the École Grégoire-Ferrandi in Paris.

In 2015, she was crowned the first Pastry Queen of India after participating in a two-day competition in Gurgaon, and went on to win the fourth place at the Ladies World Pastry Championship 2016 in Italy.

Sanjana started her career as an apprentice at Pierre Hermé, and went on to work at places like Jean-Charles Rochoux, Patrick Roger, and Olivier Bajard.

After establishing herself in the industry over several years, Sanjana launched her own company - La Folie in Mumbai. The patisserie specialises in fruit-based selections and items with unique kinds of chocolate.

You can bake your cake, and eat it too: sisters-in-law based in two continents show you how with HomeBakers.co.in

50 inspirational quotes to celebrate the start of the New Year