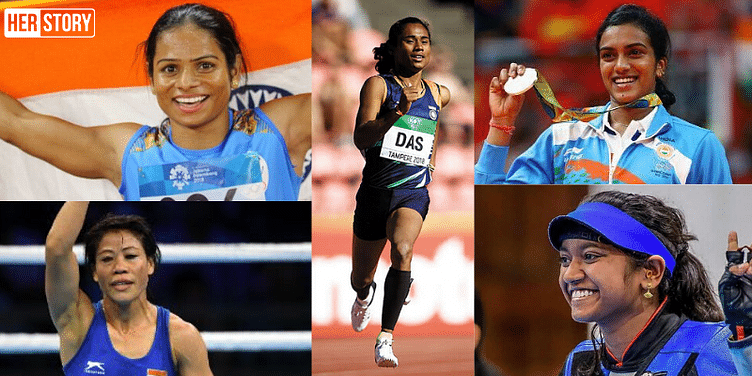 These women set new records, broke old ones, both on and off the field. Here are 10 sportswomen who made headlines in 2019.

This year, sportswomen made headlines on and off the field. From Dutee Chand to Megan Rapinoe, they shone the spotlight on issues that their sport shied away from for decades. Others like Hima Das and Shefali broke new records and set new milestones.

Women in sports heralded a new era of equality and talent in 2019. In every sport there was a breakout star this year. Here are a few that stood out among them all.

Dutee Chand made headlines both on and off the field, in the process becoming the first Indian athlete to reveal a same-sex relationship. She was also named in the TIME 100 NEXT, which spotlights 100 rising stars shaping the future in various fields.  Her on-track achievements include becoming the first Indian to win a gold in the women's 100m at the World University Games. She also won the 100m gold at the Asian Championships, breaking her personal best and national record. At the 59th National Open Athletics Championship, she won a double gold at the 100 m and 200 m dash events. This record-breaker is now focusing on qualifying for the Tokyo 2020 Olympics.

In a career spanning almost two decades, there’s been no shortage of accolades for the feisty Mary Kom. The boxing legend continues to create history and is now looking to conquer new boundaries by changing to a new weight category.  She became the first boxer in the history of the AIBA World Championships to win eight medals at the world meet. At this year's championship, she won bronze in the 51 kg category. She has six gold medals from her previous attempts. The 36-year-old also won gold medals at the India Open in Guwahati and the President’s Cup in Indonesia. The World Olympians Association granted her the use of post-nominal letters OLY, which signifies a sports person's ongoing role in society as an Olympian, living and promoting Olympic values.

This track superstar has been the most impressive performer of the year among Indian sportspersons. From her gold-winning spree in Europe to her charitable efforts, this 19-year-old has proved her mettle on and off the track. In July this year, Hima won five gold medals at various events in Poland and the Czech Republic. She successfully returned to the 400 m track at Nove Mesto, Czech Republic, after not being able to complete in the category at the Asian Athletics Championship. She also achieved her season's best timing of 52.09 seconds in the 400m to finish her European tournaments. The ‘Dhing Express’  from Assam donated half her salary for flood relief in the state. She made it to the ‘Forbes India 30 Under 30’ list. She has also been appointed as the country’s first youth ambassador to UNICEF India this year.

PV Sindhu, the star of Indian badminton, celebrated another year of conquering new feats. She became the first Indian to win gold at the World Championships, another impressive record in her career. She was also named in the Forbes list of Highest Paid Female Athletes in the World. Sindhu is India’s highest paid female athlete and ranks 13th in the world for her earnings this year.  Sindhu is also one of India’s strongest and bankable contenders for gold in the upcoming Tokyo Olympics after her silver in Rio. We are expecting a smashing comeback.

The breakout star of Indian shooting, Elavenil Valarivan has made a strong start in her debut season at the senior level. Transitioning from the junior level, the 20-year-old won two gold medals at the ISSF World Cup, one at the Rio de Janeiro meet and one at the China meet. Her maiden senior ISSF World Cup gold in the 10 m Air Rifle in Rio de Janeiro made her the third Indian shooter to win in the category. This protégée of Olympic medallist Gagan Narang is surely giving other Indian team veterans tough competition. Even though India has secured its quota for shooting for the Tokyo 2020 Olympics, Elavenil hopes to get a wildcard entry.

Shafali Verma has emerged as the new wonder kid of Indian women’s cricket. The 15-year-old is known for her power-hitting prowess and was picked in the Indian squad as a replacement for outgoing captain Mithali Raj.  With big boots to fill, this Rohtak-born batting sensation took on international pacers with ease. She became the youngest Indian cricketer to score a half century in an international match when she smashed 73 off 49 balls in the first T20 International against West Indies. She broke a 30-year-old record previously set by her idol Sachin Tendulkar. She also became the second youngest cricketer to do so. Her inclusion in the team came on the back of her run-amassing domestic season. In her third season with Haryana, she accumulated 1,923 runs, including six hundreds and three half-centuries. Mithali Raj and England batswoman Danielle Wyatt have praised the cricketer, with the latter calling her "a superstar in the making".

This 34-year-old USA winger has won it all - on and off the pitch too. She was part of the World Cup winning squad, won the Golden Boot,  the Ballon d’Or, Sports Illustrated’s Sportsperson of the Year award and the FIFA prizes. She has gained prominence off the pitch for her active advocacy of human rights, fierce opposition of Donald Trump, standing up with former NFL player Colin Kaepernick against police brutality, fight for equal pay and open access to sport, and against racial inequalities.

Megan came out in 2012 and has used her platform to stand up for the LGBTQ+ community and speak up against the policies of the US government like rolling back of law permitting transgenders in the army. She is also in the forefront for suing the US Soccer Federation for equal pay and discrimination. Megan who received wide recognition after her ‘The Pose’ celebration has now turned into a champion for the rights of various communities and sections of society.

This cricketer-turned-tennis player stunned the tennis world with her maiden grand slam win at French Open this year. The Aussie player stated the year with her career best ranking of 15 and climbed the ladder to the top, finishing the year with WTA ranking number 1. Ashleigh became the first Australian to top the women’s tennis rankings since Evonne Goolagong Cawley in 1976. She continued her triumphant run by claiming the biggest prize in tennis history when she won the WTA finals in Shenzhen, China. The victory made her richer by $4.42 million. The 23-year-old became only the fifth player to win the title on debut.

In a truly breakout year, Ashleigh won four titles, with 56 wins - most number of match wins than any player in the tour, won titles on clay, grass and hard court and finished in the Top 10 for wins in all three courts. To top it all off, she was named the WTA Player of the Year, with a whopping 82 percentage votes.

Alex Morgan, the co-captain of the US women’s soccer team has also shared the spotlight with fellow team mate Megan Rapinoe. Though she might have missed out on the awards, she has proved her mettle on and off the pitch. She led the US national team to victory in the World Cup in France and became a two-time World Cup winner. She scored six goals in her team’s campaign.

Alex has been named in the 2019 TIME’s 100 most influential people list and the US women’s national team was named Athlete of the Year by TIME. Recently, she announced her pregnancy and is expecting a girl in April 2020. She hopes to join the US team in Tokyo for the 2020 Olympics. Alex has advocated for equal and fair treatment of women in sports and beyond. She participates in promotion of youth soccer and sports.

The Orlando Pride player is also a businesswoman, author and marketing icon. Currently, Alex is planning the launch of her own media venture that will focus on content for girls created by female athletes. This comes after her writing a series of children’s books called The Kicks and her acting debut in the movie Alex & Me.

This 15-year-old took the sports world by a storm when she defeated tennis champion Venus Williams at Wimbledon this year. In the first round at a grand slam, playing against seven-time grand slam winner Venus, Cori ‘Coco’ Gauff displayed tremendous talent and belief. Even though she had a fourth-round exit against eventual champion Simona Halep, Coco won many hearts for her fierce abilities.

Coached by her father, Coco started playing tennis when she was just six. She turned pro in 2018 and this year, broke into the top 100 WTA ranking. She now ranks 68, her career best. She also won her maiden WTA title at Linz defeating Jeļena Ostapenko in the finals.

In less than two years in the circuit, Coco has shown that she is the next star to look out for.

[Year in Review 2019] From Priyanka Chopra and Mary Kom to Dutee Chand and Ritu Karidhal: the top 30 women newsmakers of 2019

Top 35 stories on HerStory that our readers loved in 2019