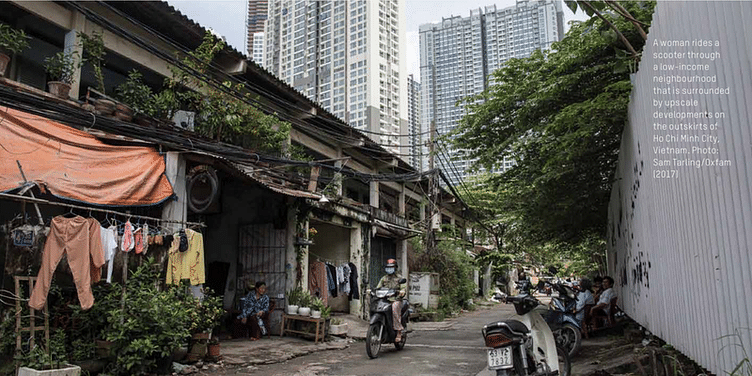 Oxfam International, the aid and development organisation released the ‘Time to Care’ report on January 20. The report looks at wealth inequality and how it’s partly driven by the burden placed on women to provide unpaid – and underpaid – care work.

The report highlights that there is a wide gulf between the richest in the world, who are mostly men and the poorest people, of whom women suffer the most. The divide is caused due to the flawed and sexist economic system that values the wealth of the few privileged men, says the report.

Oxfam finds that globally men own 50 percent more wealth than women. Its study focuses on the impact that unpaid and underpaid care work has on the prospects and livelihoods of women and girls across the world and how that is increasing global inequality.

Key findings of the report reveal stark differences that exist in the present socio-economic conditions of women and men. Some of the findings that shed light on the great divide are:

The richest 1 percent in the world have more than double the wealth of 6.9 billion people.

The world’s richest 22 men have more money than all the women in Africa.

Women and girls put in 12.5 billion hours of unpaid work every day.

Women’s unpaid care work has a monetary value of $10.8 trillion a year  - three times the size of the world’s tech industry.

Women often bear the burden of essential unpaid work like fetching firewood and water, cleaning and cooking for the male breadwinner, providing care to the elderly and the children. All of these activities across the globe combine to 12.5 billions hours of work that women do every day for free, according to the International Labour Organisation. All this unpaid care work leaves women and girls over 15 time-poor and “unable to meet their basic needs or to participate in social and political activities”.

Oxfam found that women in the poorest households in low-income countries were hit the hardest. According to data collected for the report, in Uganda, Zimbabwe, India, the Philippines and Kenya, women end up spending 40 minutes more each day on activities like collecting water and fuel than those who were better off.

Due to the burden of these responsibilities, 42 percent of women in the working age are unable to hold down a job, compared to only 6 percent of men. The report suggests that with the world facing a care crisis, the burden on care workers will only grow. With the ever increasing climate crisis, these women will be affected disproportionately as they’ll have to walk further to find water and spend more time coping with sickness.

The report suggests that a fairer world is achievable through the adoption of the ‘4Rs’ framework. The principle includes recognising, reducing, redistributing unpaid and poorly paid care work and, representing the most marginalised caregivers and giving them a voice in decision making processes that affect them.

The Oxfam report recommends six solutions to close the gulf between the caregivers and wealthy elite.

The combined wealth of 63 Indian billionaires is higher than the Union Budget for 2018-19: Oxfam