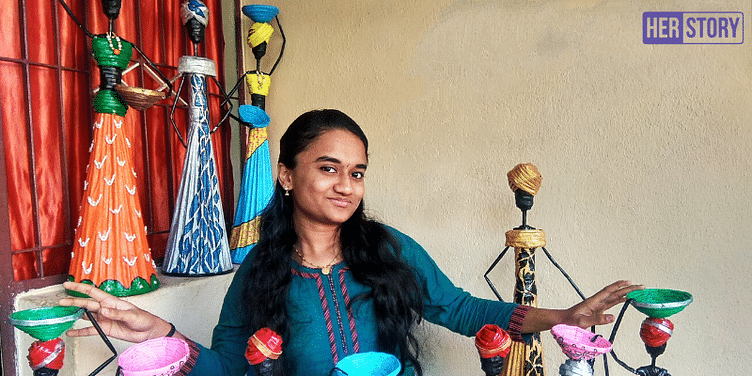 Diagnosed with a bone disease similar to brittle bone disease, Radhika has spent most of her life at home. However, a passion for making dolls from newspaper has shone through and she is looking forward to convert it into a successful business.

Radhika AJ was five years old when she had a fall and fractured her left thigh bone. Six months later, she experienced unbearable pain and couldn’t even lift her feet or walk.

She had another fracture, this time without falling down and it was discovered that her muscles were growing through the cracked bone. She underwent her first surgery where a plate was fixed in her thigh, which was removed after a year.

It took her seven surgeries and in 2010, it was diagnosed that she suffered from a rare bone disease similar to brittle bone disease. Her bones were extremely weak and could break even without exertion.

This condition led Radhika, now 20, to spend most of her life confined at home.

However, she has found her passion in crafts and is turning it into a successful business. It’s a story of how with grit and determination she overcame physical barriers to make something of her life and achieve success.

Six months after the plate was removed from her thigh, Radhika experienced sharp pain, and a plate had to be reinserted, this time, for two years.

Only when she turned eight did she get back to school. The pain was still there and would increase whenever she walked. This meant she could attend school only if she took a few weeks of breaks in between.

Her ordeal was not over, yet. Further medical examination revealed that her spinal cord had started to bend from eight hours of sitting at school coupled with her bone condition.

A new set of treatments began, with more medicines, changes in diet and physiotherapy belt for her spine..

The fractures kept increasing that warranted more surgeries. After Radhika underwent three major surgeries and returned home, a month later, she discovered that she had another fracture.

This time her family decided to find out what really was causing her so many fractures. She underwent several bone and blood tests. Her blood tests were fine, however, her bones were the problem. “My bones are like eggshells, they break very easily and my bone marrow, is like dough,” Radhika explains. She spent several years at home recovering from operations and learning to walk again.

In this time that she spent at home, Radhika used invitation cards make small greeting cards that she would give to her friends.

"After I got operated for the first time, I was home for about five years. My brother used to go to college, my mother was busy and my father used to go to work, I didn't have people to spend time with. So I was mentally weak and depressed. During that time, I started doing crafts, small greeting cards, drawing and other things."

Her brother’s friend, Manikandan saw her passion for crafts and introduced her to YouTube videos from which she learned to fashion wall hangings made out of newspaper and started gifting them to people, at small functions.

Through the videos that Manikandan brought home, she discovered the art of making African paper dolls using newspaper. She started with one, liked the look and feel and went on to make 10 more.

Her brother uploaded images of the dolls on social media and people who visited her showed interest in them. “I never thought about selling these,” she confesses. She sold one to her family friend and got 25 more orders from the same family

Slowly, word spread and she became known for her art and people loved the dolls. What started off as mental therapy had turned into a business.

“Making these dolls and crafts helped me when I felt very lonely. I felt free, I didn't think about other things. When making these, I feel like I have built a world for myself,” she says.

Due to her condition, it is difficult for Radhika to sit or walk for long. However, she manages to create these dolls in the duration that she sits. “I cannot sit for more than two hours. So I sit for a little while and then lie down. I can’t walk for too long also. Everything has to be in moderation,” she says.

Her spinal cord has three fractures; one in the neck and two others below. However, she is too weak to undergo another round of surgery.

Currently, Radhika is preparing for her 11th grade exams as a private candidate. She wanted to go to school at least for 11th and 12th standards and experience school life. However, schools in her hometown Coimbatore were not willing to take her. They cited various reasons including accessibility within the schools.

“Can people like me not study then?” she questions.

“I was a negative because I missed a lot of things in my childhood.

Even six months ago, I was a very negative person because things didn’t work in my favour. Like when I started studying I wouldn’t find a proper tutor. I would be scared and think that anything I did would end up in failure,” she adds.

However, a lot has changed for Radhika in just a few months. Her new-found positive approach has seen a surge in orders for dolls and she has also been invited by colleges to give motivational speeches.

Radhika, with the help of her parents and brother, wants to turn the small craft into a business. She has plans to create more African dolls, dolls of cartoon characters and of famous personalities like APJ Abdul Kalam and more, using newspapers.