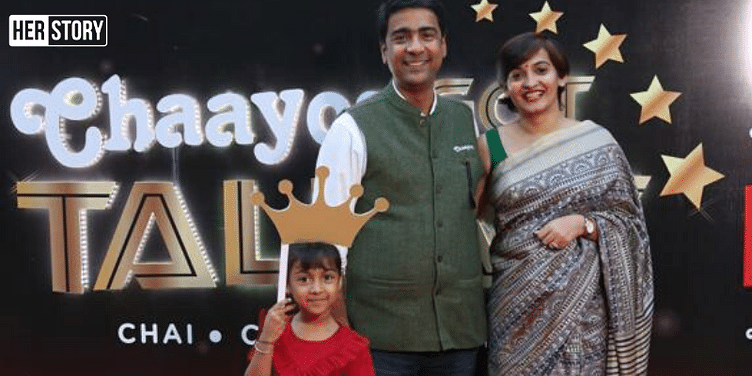 It’s always the venture and the entrepreneur who are in focus when we talk of a startup. The contribution of the spouse and children must also be highlighted and celebrated. Here we shine the spotlight on Yosha Saluja, wife of Nitin Saluja, Co-founder, Chaayos.

A psychologist and an HR specialist, Yosha Saluja worked with Reliance Communications for a few years before she moved to the US with her husband The idea of ﻿Chaayos﻿ was dreamt and brewed together there.

Yosha has played an important role in bringing the idea to fruition, sharing Chaayos’s story on social media to being the first employee and now as a controller in the finance department.

Chaayos is a multi-city chain of tea cafes which was founded in 2012 by Nitin Saluja and Raghav Verma. It was founded to disrupt the Indian market, which consumed 30 cups of tea for a single cup of coffee but lacked a home-like chai experience. Since the first store in 2012, Chaayos has been continuously experimenting and providing varied experiences with chai.

Chaayos, Building no 5 Atrium, Cyber City, Gurugram was the first ever Chaayos store which opened in November 2012. The startup is now in its eighth year of existence having expanded to 80+ stores across Delhi-NCR, Mumbai and Bangalore.

Life may have lost its predictability, but there is a lot of excitement - Shalini Gupta, spouse of entrepreneur Ashish Bhatia

From Houston to Gurugram for chai

I ask Yosha about the idea of stepping into a sector where they had to compete with every chaiwallah outside the office who sold tea for as low as Rs 5/10.

“We found people expected something more, chai was there, but people were looking for something else. The idea was to present tea in a contemporary way and when the the idea struck, Nitin’s passion was evident. A lot of research went into starting up. Nitin travelled to 100 different places in Noida and Gurugram to understand market needs. We wanted a place where one cound have home-style chai, hang out amidst a home-like ambience and eat food that go with chai. Apart from redi (cart) outside the offices, there was a dip dip available inside every office. After thorough research and strategy, the team decided to launch strategically in November 2012, just when winters were approaching, and that helped. People welcomed the idea of their chai brewing in front of them and a comfy ambience. “

The idea, however, struck root when the couple were in Houston, looking

for a cup of freshly brewed chai after dinner. After a lot of research on the gap in the Indian market and the couple had made up their mind to move back to India to pursue the idea.

Business in the DNA

Yosha shares, “Nitin made sure that I fully understood what lay ahead. The decision looked tricky at that time, especially since we were expecting our first baby.”

So, did she always know that starting up was imminent?

“Nitin comes from a business family, and it is in his DNA. My father-in-law always wanted him to take a different path because he had seen that it takes a lot when you own a business. But I knew it had to happen one day.”

When the couple launched the venture, what was the reaction of the parents?

“While my parents were okay with him taking the plunge, Nitin's family was completely against it. They could not comprehend him leaving a comfortable job and lifestyle, especially when we were expecting our child. Nitin's father was not at all convinced and did not talk to Nitin and me for a few months. His mother and sisters were sceptical, but they still gave him their blessings,’ she says.

Starting a venture by putting in personal savings to launch the first store, did finances ever become an issue?

“Since inception, one thing was evident that we would be on a very tight budget. Nitin had used all his savings to start Chaayos. To save money I had moved to my parents’ home and Nitin moved in with his friends. But the day I signed up for it, I was completely ready to accept whatever came my way. There was no question of trading his dream for material desires. And somewhere, there was a belief that all the sacrifices are for the greater good.”

Being with her spouse through thick and thin and taking several roles at Chaayos, how does Yosha see herself growing over the years?

“It’s been seven years since we started up and it has been a great learning opportunity. The first important thing is that you have to be disinterestedly passionate, i.e. passionate beyond the bounds of explanation and second, run when you can, walk if you have to, and crawl if you must, just never stop moving ahead.”

Chaayos’s first store received positive feedback. Soon, it began receiving funding as well. How has the journey been so far?

Yosha says, “It has been a roller Never had we had imagined what life had in store. For a person to leave the luxuries of life for a startup is a daunting thought, but with hard work and dedication, everything can be achieved. I don’t think either one of us will give this up for our old lifestyle. Nitin often says “Ya toh chill le lo, ya thrill le lo”, and that summarises our very thought. Even with all the hard work and sacrifices, this journey has been enriching, and I am confident it will continue to surprise us and delight us as we go along.”

The couple’s daughter Brinda who is seven now was born just three months before their startup “baby” took a brick and mortar form. I ask Yosha how does Brinda connect with the venture?

“I have a joke going around in our family that she is like Abhimanyu. When we were expecting Brinda, the whole house used to talk about Chaayos. In the true sense, she heard everything, the passion has passed on to her. Both father and daughter discuss Chaayos, and she comes up with innovative ideas. She markets it like anything. When passing out from Class 1, she took shikanji and bun maska for all her classmates. She is madly in love with Chaayos.

Yosha also narrates an incident, which proved to her how Chaayos was well-loved as a brand.

“We were scouting for our daughter's admission. We had zeroed in on a school, and we had heard scary stories from other parents. When I went for admission, the lady in charge asked the profession of the father. I said, ‘I don’t know if you have heard of Chaayos? My husband is the founder of Chaayos’. She had a Chaayos café near to her home, and she was a regular visitor. So, the moment she heard this, her jaw dropped, and she was so excited. After that, the admission was a piece of cake,” (she laughs)

She has some pertinent advice for other spouses who are on a startup journey.

“Entrepreneurship is a high-pressure pursuit, and the only way a person can win battles from all fronts is when he knows that he has a spouse who has his back at all times. There are challenges on all fronts, but ensuring that the home is a happy place, will give strength to face whatever comes his way. A strong and supportive spouse for any entrepreneur is a boon.”