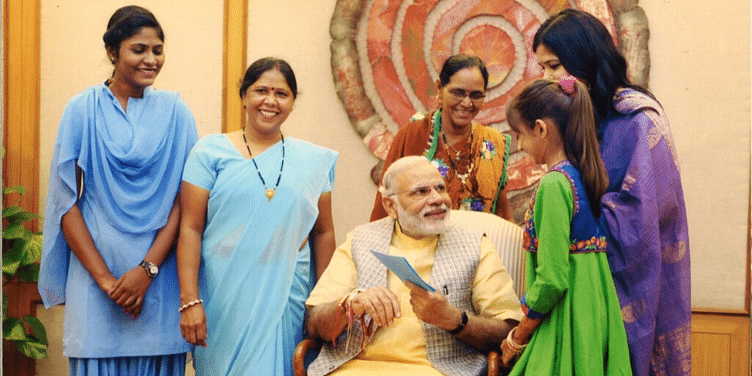 Hailing from Alwar in Rajasthan, Usha Chaumar has come a long way since the days she worked as a manual scavenger. Today, she is the President of Sulabh International Social Service Organisation and a Padma Shri awardee.

There is no right time or age to don courage and conquer the battles that life throws at us. Rajasthan’s Usha Chaumar’s journey is a testimony to this. The 42-year-old, who was once relegated to a marginalised position in her village in Alwar, located 150 km north of Jaipur, because of her profession as a manual scavenger, has managed to brave all odds and become an inspiration to an entire community of women.

At 42, she has been recognised by the Indian government for her outstanding social work and efforts to pull herself and others out of social ostracism and the inhuman practice of manual scavenging. She was awarded earlier this year with the Padma Shri, the fourth highest civilian award in the country.

Today, Usha is undoubtedly a beacon of hope for the women and the Dalit communities of Alwar, who for decades have been subjected to discrimination and deemed as “untouchables”. Her journey, overcoming social malpractices and finding her place in the society, hasn’t been easy.

A manual scavenger from the age of seven

“If given an option, who would want to clean toilets and latrines, it’s the most dirty and disgusting jobs possible,” Usha tells us adding, “Because of this, not only do others in the society ostracize us but also they don’t want to mingle with the people in our community.”

Manual scavenging, which refers to the manual cleaning and disposing of human excreta from dry latrines and sewers without any safety or precaution is a social malpractice that has been prevalent for ages. Despite the Employment of Manual Scavengers and Construction of Dry Latrines (Prohibition) Act, 1993 classifying it as a non-bailable offence, this practice continues to be in existence.

In the remote pockets of India, where education and social awareness struggles to make its presence felt, this profession begins to takes charge of the future of people right since a young age. Usha herself was a child when she was inducted into this heinous profession in her hometown of Deeg, near Bharatpur, in Rajasthan.

“I have been working as a manual scavenger since the age of seven,” she says. “I followed my mother into this field, in our community it is important for us to learn this work as even after marriage, we are supposed to continue with manual scavenging.”

Her struggles continued. She was just 10 years old when she became a child bride, and by the time she was 14, she found herself shifting base to her in-laws’ house in Alwar. Even as places changed and she took on a new role as a married woman,  what didn’t change was her position in the social hierarchy.

“People still considered us as the untouchables of the society,” she says.

Business of beauty: how the Indian cosmetic industry spurred the rise of startups like Nykaa

The tryst with Dr Bindeshwar Pathak

They say, the best things in life come unannounced. With Usha, something similar happened when she met Dr Bindeshwar Pathak, the founder of the Sulabh International Social Service Organisation (SISSO).

A strong believer in Gandhian philosophy, Dr Pathak, in the last 50 years, has worked tirelessly for the human rights of the manual scavengers who clean dry latrines. All his initiatives, in fact, have been aimed at rehabilitating manual scavengers, restoring them to a place of dignity by providing them with alternative employment channels through skill development.

In 2002, Pathak happened to visit Alwar, where he met Usha and the other women in the community engaged in the work of manual scavenging.

“Sir asked us, ‘why are you still working as a manual scavenger?’ This made me think, I used to believe that this is the natural order of progression for us. My mother had done this work, and so had the generations before her. Traditionally, our community has been working as manual scavengers for ages now.”

For Usha, the thought of having an alternative lifestyle and a source of employment was nothing short of a dream, one that came true with the inception of Nai Disha. The local NGO, was set up by Pathak with Dr Suman Chahar, the Senior Vice President of SISSO, overlooking its operation and the training of the women at the institute.

Since Usha took the leap with Nai Disha, several other women in her village have also found the courage and followed in her footsteps, learning a slew of new skills and craft in the hope of a better life.

Says Suman, under whose guidance the women of Alwar have discovered alternate employment channels today, “At Nai Disha, these women have learnt to prepare pickles, papads, noodles and other eatables.”

“Now, the people in Usha’s village, who treated her as an untouchable, are willing to buy the food products made by her. This has also increased her income substantially,” she adds.

Usha, who earned Rs 230 a month as a manual scavenger, struggling to make the ends meet for herself and her family, feels financially stable today. And that’s not all. She has even ascended to the position of the President at Sulabh, an honour she was conferred with in 2007.

In her newfound role, Usha is one of the leading ladies of the community, a globe-trotting social worker, and an agent of change. More importantly, her indomitable spirit in the face of struggles, continues to inspire countless women.

Ainara Kaur’s journey of being a high-flying executive to a solo traveller, and then to founding her own company

How Nobel laureate Toni Morrison addressed the complexities of race, gender, and class in her novels