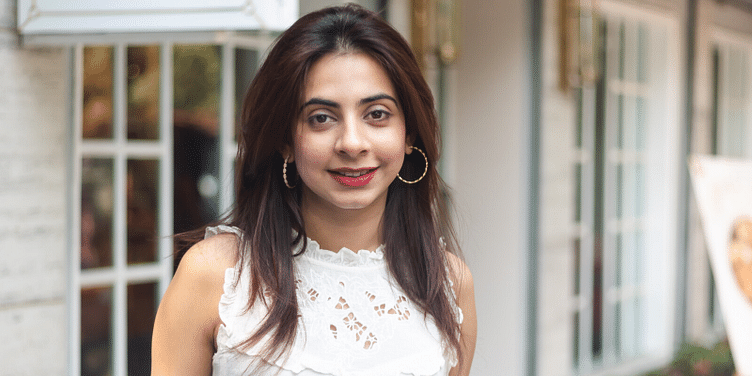 Launched in 2012 from a small kitchen in Bandra, Love & Cheesecake today is a multi-store brand with eight outlets in Mumbai. More outlets will be added – all while Founder Ruchyeta Bhatia manages her business expansion plans and her pregnancy.

Born out of a 300 sq ft experimental kitchen in Bandra, the story of Mumbai-based Love & Cheesecake is one of passion with generous dollops of grit and determination.

The chain of premium dessert cafes and full-service restaurants was started by Ruchyeta Bhatia, an Economics graduate from Mumbai’s Jai Hind College, in 2012. Although the inception of the business was somewhat unconventional, it was, as she calls it, a culmination of a long-drawn dream of starting her own business.

"I’ve always wanted to do something in the food industry," Ruchyeta aka Mumbai’s Cheesecake queen tells HerStory. "I really do believe we have a once-in-a-lifetime opportunity in this space in India over the next 10 years. Our tastes are evolving beyond traditional food and our youth is definitely a 'foodie'."

These ideas prompted her to start on a journey with what is now a premium desserts brand, boasting eight outlets – with five more to launch between January and March, and another three to launch between June-July – spread across the length and breadth of Mumbai.

“On the cards next, for the third quarter is the launch of three outlets in Pune – the first city Love & Cheesecake will expand to after its home base in Mumbai,” she adds.

In business – as is in life – the only thing that is certain is, uncertainty. And Ruchyeta’s story, as a first-generation entrepreneur, is no different. In the early 2010s, when she had begun her career, little did she know that her brush with the cushy corporate life was only for temporary.

“My first job was at an international market research firm where I helped analyse survey results. I subsequently moved into an advertising consulting role with Ogilvy. I didn’t last very long there,” the entrepreneur shares, “I left within five months to start my own business.”

As one thing led to another, at the age of 22, Ruchyeta, with an aptitude for business but with no previous experience whatsoever, found herself launching her very first venture. The business related to corporate training and it made use of adventure sports as part of the model; and while it was successful for a while, Ruchyeta soon realised the idea was not scalable.

She ended up selling the business in January 2012, and this led to the start of something new, this time her calling turned out to be in the food industry.

Tryst with the culinary world and Chef Amit Sharma

As it turns out, after narrowing down her options to the food and beverage industry, the 33-year-old had decided to undergo a culinary course to get familiar with the sector and sharpen her skills at the same time.

“I applied to the Culinary Institute of America and I was accepted to start in the summer of 2013,” she says. But there was one minor catch. “They needed me to spend six months in a commercial kitchen before I could join them,” Ruchyeta explains.

This brought her to Mumbai’s Marriott Hotels, where she would spend the next six months garnering necessary skills and also learning the fine nuances of  desserts. She says, it was over the course of this internship that she realised that desserts was a tough category to crack.

She realised making great products is hard and delivering them even more so, especially when it comes to Western desserts. Ruchyeta explains that even small variations in temperature could completely change the taste. This is evidently challenging as a business prospect, but it only whetted her entrepreneurial appetite.

“The idea of building a scalable national dessert brand with consistent product quality appealed to me and so I jumped into it right away," she says.

Her time at the Marriot did more than just bring her to a new business venture, it also introduced her to pastry chef and her now co-founder Amit Sharma.

With over 10 years of experience in the hospitality industry, working with top names such as the Taj Group and the Marriott, Amit brings to the plate necessary expertise and the drive to create something new and big. Ruchyeta shares the same passionsm and that led to the inception of Love & Cheesecake.

“The story behind our first set of customers is interesting,” says the Ruchyeta adding, “When we started, we didn’t know for sure what the menu would look like and we didn’t want to burn a lot of money opening stores.”

So, pooling in their savings for initial seed capital, the founding duo laid the bricks of the business out of a small, 300 sq ft place at the back of a building in Bandra. “We plonked in our equipment and started concocting stuff. A few people would just come by sometime and try some of those things,” Ruchyeta tells us.

Things, however, got better for the duo when they got featured in a couple of local blogs. Suddenly, the walk-ins exploded, and word-of-mouth marketing brought to their small dessert joint a considerable amount of footfall. “This really helped us initially and convinced us that we have our minimum viable product,” she adds.

What started out as an experimental kitchen has exploded into a chain of cafes and restaurants. The company has two brands today - Love and Cheesecake, which is the dessert brand and Poetry by Love & Cheesecake, which is the all-day dining brand. Even the team behind the cafes and the restaurants have grown over the years. From a two-people army, the business has scaled to become a team of 250+ employees.

“Currently, we serve more than 7000 cheesecake slices a day and many more customers walk in to try our salads, sandwiches and beverages,” Ruchyeta quips. Her business is currently growing at 25-30 percent YoY, raking in a revenue of Rs 35 crore last year.

Love & Cheesecake is a successful business today, in fact, all the stores under the umbrella are profitable at the moment.  And, by far, the most difficult challenge the woman behind this brand had to face, was to manage the current business expansion plans while also being pregnant with twins.

“I found out in June 2019 that I was pregnant with twins,” says Ruchyeta, adding on a side-note that this is not going to stop her. For this woman entrepreneur, as she says, just refuses to “slow down”.