These 5 women changemakers from Kerala are shattering stereotypes 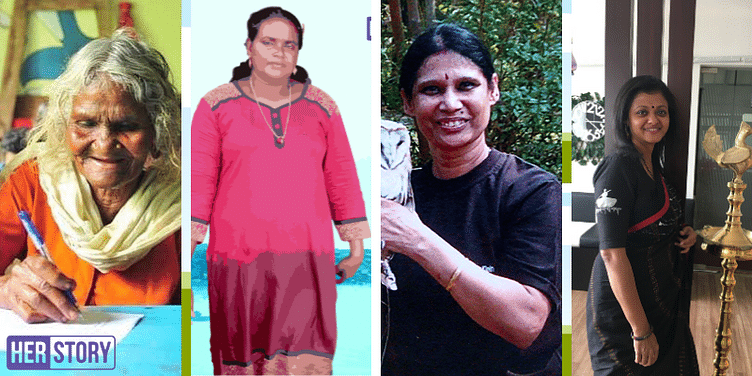 Wildlife rescuer, check. Fisherwoman, check. Mahout, check. These women changemakers from Kerala have broken the mould and are proving that no limits are beyond them.

The southern state of Kerala is no stranger to women’s empowerment or emancipation.

In a state where women outnumber men, there is no field that Keralite women have not staked claim to - whether being coconut tree climbers, mahouts, fisherwomen, bus conductors, or other traditionally male-dominated jobs.

Here is a list of women from Kerala who have shattered stereotypes, broken the mould, and gone the extra mile to prove that no limits can bind determination .

A resident of Kochi, retired teacher Vidya Raju has had a life-long passion for rescuing wildlife in danger, especially snakes. She is well known as a snake rescuer in the city, having rescued more than 1,000 snakes, and counting. It was around 2002-03 when her husband (a naval officer) was stationed in Goa and Vidya was volunteering with the World Wildlife Fund that her journey with snakes began.

Soon, she started rescuing snakes encroaching into the area they lived in, and handing them over to the Forest Department.

Vidya is also against the practice of chaining elephants, which is a common occurrence in the State’s many temples. Google “snake rescuer Kochi” and Vidya’s name comes up first. She was of immense help to the Forest Department during the 2018 floods in Kerala, when she rescued many snakes in Kochi.

In an earlier interview with HerStory, Vidya said, “All I want to do is contribute my bit to society, in whatever way I can. And this is the way I know best.”

Rekha Karthikeyan is India’s first licensed fisherwoman. Along with her husband, Karthikeyan, she faces the rough Arabian Sea every day to bring home an income so that their four daughters can live a comfortable life.

Around 10 years ago, Rekha began going out to the sea with Karthikeyan. She recalls, “The first day was a nightmare. I vomited continuously for three hours until I started coughing up blood. This went on for a few weeks till the seasickness subsided and I could sit on the boat properly.”

The couple sets out either at dawn or around 3 pm, and travels up to 40 nautical miles. At times, the duo spends the whole night at sea, navigating the waters only with the help of the skies and the stars. Interestingly, Rekha did not know how to swim until recently.

When the 2018 floods ravaged Kerala, social entrepreneur Lakshmi Menon fashioned a little rag doll made out of soiled fabric from the famous Chendamangalam textile village.

Chekutty, as the doll was called, stood out as the face of the fiery floods and became a movement that galvanised the people of Kerala into action.

Last year, she initiated the FriendSHIP campaign to thank the fisherfolk who braved the floods to rescue people. It included a crowdsourced life insurance scheme and entrepreneurship opportunity for their families.

The social entrepreneur actually shot into the limelight in 2015 with her company Pure Living’s Ammoommathiri or the Wicksdom initiative that created cotton lamp wicks rolled by impoverished senior citizens abandoned at old age homes. These wicks are sold to individuals and organisations and the entire money goes to its makers.

Rolapena is another initiative that uses these women to make disposable pens from paper; these grow into trees when disposed of.

In 2019, Kembi from Wayanad in Kerala cleared the Kerala State Literacy Mission’s (KSLM) literacy examination. Hailing from Padachikunnu Colony in Mananthavady, Kembi was the oldest of the 2,993 other candidates who took the exams.

Kembi, along with other candidates, who belong to the tribal settlements of Wayanad, Kerala, cleared the literacy exams conducted by the state agency as well.

When she was younger, Kembi used to work as a daily wage labourer. However, she never gave up on her interest in studying.

Years later, Kembi found another opportunity to study again when literacy pracharak Claramma VV and instructor Sunitha P approached her. Sunitha motivated Kembi to write the exam when she and Claramma were campaigning across the state for KSLM's total literacy programme for the tribal people.

Shabna Sulaiman, hailing from Kozhikode in North Kerala, takes care of tusker Manisheri Rajendran and is enjoying her role as caretaker.

The 27-year-old is a medical professional from Dubai and has taken a break to train as a mahout at the Varikassery Mana in Ottapalam in Palakkad district.

She is the first female mahout from the Muslim community in the state and, while researching elephants, felt it would be best if she stayed closer to them to learn how to handle them.

The life she dreamt for us