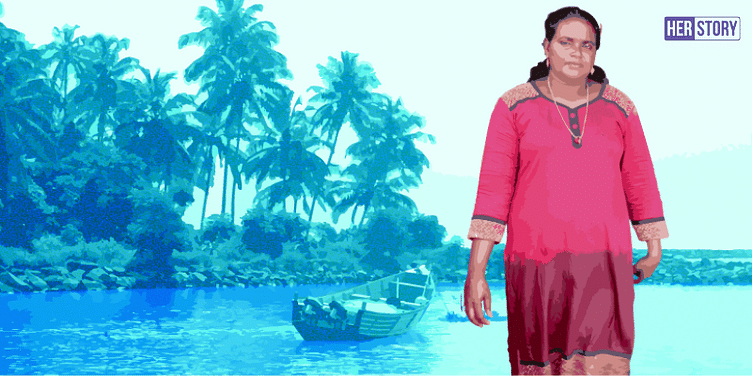 Rekha Karthikeyan is India’s first licensed fisherwoman. Along with her husband, she faces the rough Arabian Sea every day to bring home an income so that her four daughters can live a comfortable life.

It’s a two-hour drive from Kochi to Chettuva beach in the Chavakkad region of Thrissur district in Kerala. As I zip through the winding roads with a slight nip in the monsoon air, I soak in the beauty of the lagoons that pass by.

I am on my way to meet India’s first and only fisherwoman who has a licence from the Central Marine Fisheries Research Institute (CMFRI) for deep sea fishing.

Thirty-nine-year-old Rekha Karthikeyan has been in the news for some time, for it’s rare for a woman, even in a high-literate State like Kerala, to venture out to sea.

But behind the plaudits, awards, and media attention, lies a story of struggle and hardship. As I walk the path to her house, where the road has been gutted by the sea, I see her waving at me from afar. The spot, she later tells me, is the only place she can connect to a mobile network.

The house is hardly 30 metres away from the Arabian Sea, a precarious place to be in as the rough and treacherous waves can easily flood the entire place.

Her husband, Karthikeyan, also joins us. For, this story is not just about Rekha but also about this husband-wife duo that ventures out to sea day after day, night after night, come lashing rain or heavy wind, without a GPS or compass with only their prayers to the kadalamma (sea goddess).

That morning was the first time the couple had ventured into the sea after two months. In May, just a day after their oldest daughter’s wedding, Karthikeyan had a heart attack and was under treatment. The couple had no other option but to go back as their lives depended on the sea. That day’s catch was not much - it was raining heavily.

“We got married against the wishes of our parents and I settled down with Karthikeyan here on Chettuva beach. He was a fisherman by profession and we had to go through a lot of hardships as there was no other support. I used to help him out with repairing the nets or clearing the fish from the nets. One day, I decided I needed to help him out in the sea too,” she recollects.

Around 10 years ago, Rekha began going out to the sea with Karthikeyan.

“The first day was a nightmare. I vomited continuously for three hours until I started coughing up blood. This went on for a few weeks till the seasickness came down and I could sit on the boat properly.”

The couple either set out at dawn or around 3 pm in the evening and travel up to 40 nautical miles. At times, they spend the whole night at sea, navigating the waters only with the help of the skies and the stars. Interestingly, Rekha did not know how to swim until recently.

There was a lot of attention around her decision even then, mostly negative. Neighbours questioned her choice to accompany her husband to sea. Others made fun of her and said that it was not a profession for a woman.

But Rekha ignored them all.

“I knew the hardships we were facing and all the debts we had incurred. We left our four daughters at home so that we could give them a good life. No one except my family and kadalamma understood my pain. With self-confidence, comes courage,” she adds.

Life at sea is also wrought with many challenges. Rekha says there have been many instances where they barely escaped from drowning.

She narrates, “I remember an incident that happened some time back. It was midnight. I usually do not sleep as I am always alert and the fear that I don’t know to swim also keeps me awake. I saw a light coming towards us from a distance. It was actually another boat speeding towards us. I screamed with all my might and one person at the other boat heard me. All of them had been sleeping and they managed to veer the boat away from us just in time, and we escaped with just a scrape on the side. They sped away without even stopping to find out what happened to us.”

Another time, a part of the engine broke away and the couple was stranded at sea for almost seven-and-a-half hours until another boat rescued them.

A little while after she started accompanying Karthikeyan to the sea, the couple went to the authorities to obtain a licence for Rekha. She was denied one because the official felt “fishing was not a profession for women’.

Life is still a struggle

Surprisingly, in 2016, even before getting her licence, Rekha was honoured by Central Minister Sudarshan Bhagat for her work at sea.

Much later, officials of the CMFRI spotted her on the waters, and finally awarded her a deep-sea fishing licence.

Soon, the State government helped the duo set up a fish cage farm. Unfortunately, it was partially damaged after the floods that ravaged Kerala last year.

While she may have made history, life is still a struggle for Rekha and her family. Karthikeyan’s health is a big concern as they have not been able to renew their medical insurance cards as the couple is always at sea. There are debts to pay and a constant fear of the sea displacing them from their home. Some of their neighbours constantly harass them with police complaints or destroy their equipment.

“They see all these big cars and TV cameras coming to our home and think I am getting a lot of money, but the reality is different,” she explains. Despite this, Rekha is happy for the support and love she has received from all over the country.

As I bid goodbye, Rekha walks me back to where the car is parked. There is a group of people who recognised her and asks her for a selfie. She obliges willingly and makes small talk.

A new dawn will come and Rekha and Karthikeyan will again leave their three daughters home and head to the sea. The air will be filled with their prayers and hopes. Despite the uncertainty, their faith in their kadalamma is strong. They know the goddess will not let them down.

Meet the saree-clad bodyguard who is shattering stereotypes in the security services business ...