Future of Work: Workspaces should focus on being flexible, says Parvathi Menon of Innovation Alchemy 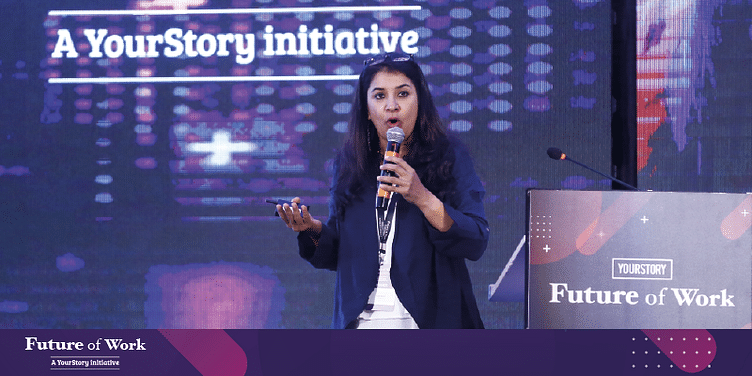 At YourStory’s Future of Work, Parvathi Menon said that young professionals entering large MNCs expect workspaces to not just value their skills, but have a flexible and open environment.

Workspaces have evolved over the years and in 2020, professionals are looking to make work culture more flexible. To that effect, Parvathi Menon, Facilitator at Harvard Business Review (HBR), at the third edition of YourStory’s Future of Work event, spoke about how the workspace culture is evolving with time.

Parvathi, who is also the Managing Director of Innovation Alchemy, asked the audience, “How does an organisation that has both young and older professionals, combine their skills in the future of work?”

Taking on the title of the event, she cited the example of General Electric, an American manufacturing company headquartered in Boston, which introduced 50 percent of new, young people to its workforce – known as ‘Digerati’.

Though technology is being absorbed in the workplace, people who come with an intrinsic knowledge about the technology they are proficient in, also bring with them many good workplace practices.

“A few of you would know and relate to this – tech leaders are very optimistic about the future of work. Artificial Intelligence (AI) is a catalyst for more productivity and many of us are using it. A big impact of AI on high-value work, a wide range of workplace changes, people working from home, remote collaboration, and networking will happen. More professionals from engineering backgrounds are walking into organisations where there is buoyancy, excitement, and opportunity. And this is where the potential of work and the future of work lies,” she told the audience.

HBR’s HBR Ascend is a digital-first platform focussed on young professionals, which, along with Microsoft, conducted a study where 650 business leaders and tech decision-makers across the world were asked what they thought work would look like between now and 2040.

Here are some of the findings from the survey:

Along with that, HBR Ascend conducted another survey titled, ‘The Changing Perspectives of Young Professionals on Work and the Workplace’, where 2,700 young professionals across the world were asked what they valued in the workplace and how the future of work might look like by 2040.

Among the findings, the one that was common in both the surveys was a huge appreciation for flexible workspaces, which combines well with what business leaders today think – a career path with advancement opportunities, someone who can guide and provide an avenue from which one can steer themselves, along with training and development programmes which showcase a clear vision of the corporate goals.

However, one key takeaway from the second survey was that young professionals care about social issues. They think that life, work and the issues need not be separated but rather integrated.

As professionals who work together come from various backgrounds, they expect an organisation to provide equal opportunities and have a perspective on political or social issues.

“[There is] a juxtaposition about what young professionals demand from the organisation and how much does it think about what they can present in this case,” Parvathy said while explaining the findings.

Further, several young professionals feel that they have the technical skills to succeed, however, when in a workspace, they have to deal with issues like office politics which are difficult to understand and navigate, and take the focus away from the skills they bring to the organisation.

As the new generation walks into the business space with a lot of buoyancy, the organisations are aware of their excitement and work towards harnessing their vigour. However, there still are management challenges which individuals are not able to put their heads around, Parvathi added.

“They want training and development, but there is a lot of ambiguity on what training and what development they should be taking. Things are moving fast and the ambiguity doesn’t allow them to build on that – a lot of changing jobs, a restrictive work culture, and a lot of challenges in dealing with people who are older in the organisation and have very different work practices from what you were expecting from the work environment,” she explained.

Professionals may want to collaborate, and perhaps most know how to do it as well, but they may find a lack of a way of doing so with excessive workloads at the organisation.

The idea is to begin evaluating skills from a personal development perspective in the context of a digital world for the future of work, and equip oneself with it rather than to wait for someone else to come up with a training plan that works best for them, she concluded.

Back to work: Has it become easier for women to rejoin the workforce after a break?