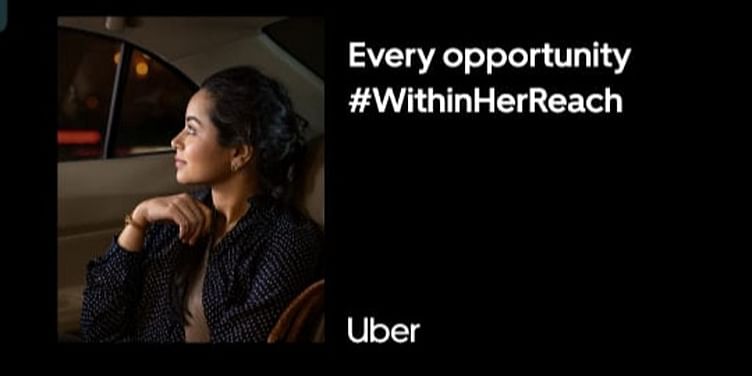 Called #WithinHerReach with Uber, the campaign aims to change the perception of 'we want our women to go far, but not far from home'.

With Uber’s first and last-mile connectivity, the brand aims to make every destination #WithinHerReach.

According to the data from the 2011 census, three out of five women refrain from travelling beyond a kilometre for work. Despite finding their dream jobs, women often give up higher-paying offers in favour of a shorter commute resulting in an astonishing low ratio of men to women of 4.5 to 1 travelling to work.

While there are many societal and cultural reasons for the gender commute gap, safety en route to work continues to remain one of the major factors influencing this downward trend.

To address this gap, Uber’s new campaign will commence with a social experiment to highlight the glaring gender commute gap between working men and women.

The social experiment questions men and women on their dreams and career aspirations and how far they are willing to go to achieve it.

The survey aims to bring to the fore a hard hitting reality that while men largely worry about the pay scale and career growth, women are most concerned about the distance to work and subsequently a safe mode of travel, often resulting in societal and family pressures deterring them from taking the leap.

Through the #WithinHerReach campaign, Uber aims to change the perception of “we want our women to go far, but not far from home” and empower women to fulfil their ambitions without any societal pressure.

Speaking about the campaign, Lucinda Barlow, Senior Director Marketing APAC at Uber, said, “The gender commute gap is an issue that we at Uber really can, and should be helping with. Many Indian women are ruling out career opportunities to stay closer to home, whether it's down to safety concerns or a lack of travel options. With this campaign, we want to support women to pursue their ambitions, and to move forward the conversation within communities and workplaces as well as enable safe and convenient mobility options for everyone, especially women.”

The campaign will be launched pan-India and across relevant mediums.