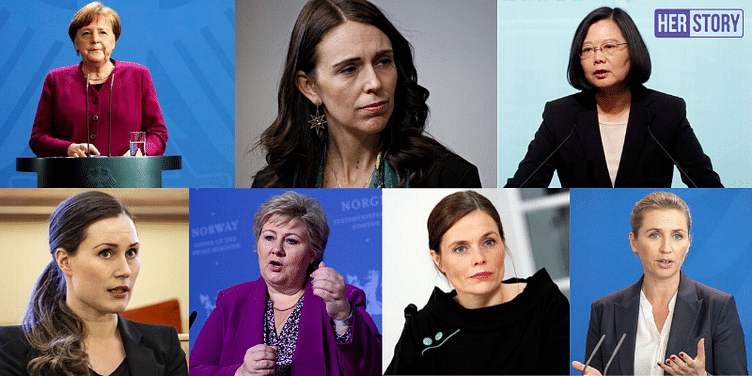 Women leaders in different countries have been successful in curbing the spread of coronavirus. Here is an in-depth look at the measures they are taking to face challenges head on.

If you are on social media, you would have come across posts and images that say - “What do countries with the best coronavirus responses have in common? They are all led by women.”

Heads of states of Germany, New Zealand, Denmark, Taiwan, Iceland, Finland, Norway and Belgium all led by women have been successful in flattening the coronavirus curve. These countries are reporting a decline in the number of cases.

Apart from having women leaders, these countries were also early movers in instituting preventive measures, compassionate and transparent communication from their leaders who backed scientific information and took cues from public health officials rather than the other way round.

These countries are now leading the path in the fight against COVID-19 and setting examples for other countries to follow.

Here is a look at how these women-led countries are battling the virus better than others.

According to a Johns Hopkins University study in January, Taiwan was one of the most at-risk areas outside of mainland China - owing to its close proximity, ties and transport links. Just hundred 100 miles from China, Taiwan’s President Tsai Ing-wen was the first world leader to start taking action.

She installed 124 measures to contain the spread of the virus in the island nation of 24 million population without imposing a lockdown. With the experience of suffering from the SARS virus in 2003, Taiwan decided to screen all passengers from Wuhan on the same day - December 31 as news came of an unknown virus in the Chinese city. Taiwan's National Health Command Centre stepped into action and rolled out island-wide testing including retesting people who had earlier reported unexplained pneumonia.

The early measures also included banning travel from many parts of China, stopping cruise ships from docking at the island's ports, and introducing strict punishments for anyone found breaching home quarantine orders. According to Reuters, it also incentivised citizens to follow social distancing guidelines by offering noodles, goodie bags, masks, a stipend and free packages for gaming and online movies.

Aggressive containment, quarantine and monitoring measures have been successful in limiting local transmission of the virus with the country reporting only 395 cases with 61 deaths. CNN reported Taiwan to have produced the best response in containing the spread of the virus.

German Chancellor Angela Merkel’s actions have proved that bigger countries and not just island nations can curb the virus. Merkel got onto a war-footing early on and informed citizens of the measures the country would have to take. The country’s early lockdown measures have proved fruitful with Germany faring better than its European counterparts. Though the country has reported over 134,750 cases, the death rate is far lower with 46 deaths per million. Social distancing and movement restrictions have been in place since mid-March and gatherings of more than two people, which were set to expire, have now been extended to May 3.

With the curve slightly flattening, the German Chancellor is planning to slowly ease restrictions.

“I can say the latest numbers on the spread of the virus give reason for cautious hope,” Merkel said in a press conference on April 9.  “The curve is flattening slightly. And the number of those infected is going slightly down. We can be very happy about that.”

Her calm approach and transparent communication strategy have earned her over 89 percent approval of the German people, according to a poll by the national broadcaster.

A German virologist told the New York Times that their biggest strength “is the rational decision-making at the highest level of government combined with the trust the government enjoys in the population.”

New Zealand Prime Minister Jacinda Ardern was clear, she would value people, not just the economy and respond fast to the threat. Ardern was deciding measures and degree of threat levels even before the country reported its first death.

On March 19, she banned foreigners from entering the country when there were 28 confirmed cases. She made it compulsory for citizens returning from international travel to be quarantined at home. The country set up designated quarantine centres for returning citizens. On March 23, New Zealand went into a lockdown with 102 confirmed cases and no deaths. The country conducted widespread testing and has carried out over 51,000 tests.

Professor Michael Baker, from Otago University's Public Health Department, who helped advise the government in its response to coronavirus told The Washington Post that the “real lesson from New Zealand has been the combination of good science and leadership.”

Ardern has been conducting press conferences and live Q&A videos, answering the citizens’ questions and urging them to be patient and calm. She even addressed children’s questions and compassionately told them that there would be no Easter bunnies this year.

As of April 9, the country reported a decline in the daily number of cases for the fourth consecutive day. However, Ardern is tightening the restrictions in a bid to fight the virus. At the time of writing this story, the country reported 1,401 confirmed cases and 15 deaths, one of the lowest deaths rates in the world.

Free testing for everyone in Iceland

Iceland’s Prime Minister Katrín Jakobsdóttir offered free testing to all its citizens. This has enabled the country to identify asymptomatic cases in the population, and people coming forward on their own to be tested.

Iceland has the highest per capita rates of confirmed cases, which is because it has tested more people per capita than anywhere in the world. According to data from ‘Our World in Data’, the country has conducted over 100 tests per thousand people, which is far more than in any other country.

Apart from testing, Iceland did not resort to a lockdown like other countries. Though some businesses are closed, the school system is only partially closed. More than 7,800 people have been quarantined and more than half of the people who were diagnosed were quarantined even before their diagnosis leading to early prevention. The country has 1,200 confirmed cases with eight deaths so far.

The youngest head of the state in the world, Finland’s Prime Minister Sanna Marin is spearheading a social media campaign to help spread fact-based information to the Finnish public.

The number of coronavirus cases in the country is over 3,200 with 72 deaths. The country is in a lockdown since mid-March.

Understanding the need to spread information across the country, the government brought in social media influencers who have been categorised as critical operators along with the other essential workers. The country’s national emergency supply agency is helping turn government messages into efficient social media messages that influencers can use free of charge to disseminate amongst the people.

“We are aware that government communication doesn’t reach everyone. Before, this was possible through traditional media like television, but today, especially young people get their news through social media,” said Aapo Riihimäki, a communications specialist at the Finnish prime minister’s office.

Norway’s hospitalisation rate has come down

Norway’s Prime Minister Erna Solberg invoked emergency measures on March 12. According to Politico data, Norway has recorded 6,798 cases of the coronavirus with over 116 deaths. However, Norway is seeing a positive turn with the number of hospitalisations decreasing. The Norwegian Institute of Public Health has reported that the number of patients in Norway hospitalised with COVID-19 has fallen to its lowest level since March 26.

Solberg’s administration has collaborated with Telenor, Norway's largest mobile operator to help them track the spread of the coronavirus. Solberg also put a stop to a wide range of public and private institutions including schools and restaurants and quarantine measures were out in place for people with travel history.

The government vowed to provide measures to aid business owners as well as allow for increased paid absence for parents caring for children at home.

With very low local transmission rates, the Prime Minister announced relaxation of emergency measures after Easter. Kindergartens are set to open on April 20 with junior schools following a week later. The ban on people staying in cabins and other leisure properties outside of their home municipality will also be lifted from April 20.

“The contagion curve has flattened out. Together, we have reached the goal that each infected person does not infect more than one other person. It is pleasing, but just a snapshot. We can't lower our guard. We are still far from half-time,” Solberg said at a recent press conference.

Denmark’s Prime Minister Mette Frederiksen was the second European leader to impose a shutdown from March 11. On March 15, she announced an economic package that covered 75 percent of employee salaries in businesses and 90 percent for those paid by the hour.

The country has reported at least 6,681 cases and 299 deaths. With the rate of infection and deaths falling, Denmark is slowly lifting restrictions. Mette Frederiksen even welcomed children under the age of 11 in Valby on their return to school.

Denmark has made remarkable success in curbing person-to-person spread. The head of SSI Infectious Diseases Institute said that it had managed to reduce the number of people that one positive case could infect from 2.6 people before the lockdown to 0.6 in April.

It has been widely praised for its swift action in restricting movement before infections were able to spread across the population. An Imperial College London study has argued that Denmark avoided a three-fold death by ushering in strict and timely, preventive measures.

Tips for working moms to balance work and family

With Cover Story, Manjula Tiwari is putting an ‘Indian spin’ to fast fashion