CoVeed for Covid: social entrepreneur Lakshmi Menon wants to foster the spirit of co-existence during lockdown 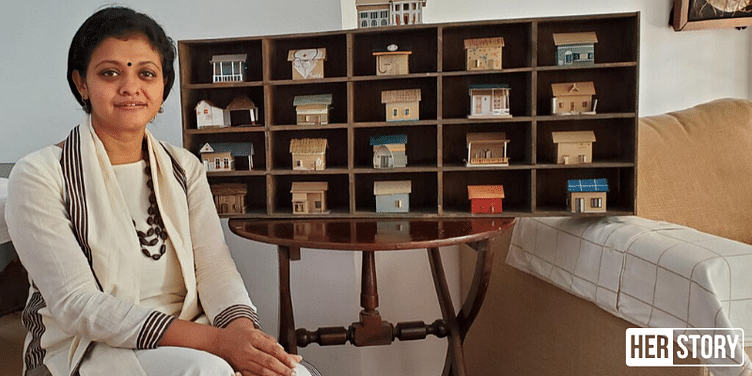 Kerala-based social entrepreneur Lakshmi Menon has initiated the coVeed project, which exhorts people to craft paper houses and pack them with provisions to donate to the needy amid the coronavirus crisis.

As the world wages the coronavirus war, most of its population is spending time in self-isolation and under lockdown.

In India, as we are facing an extended lockdown for another three weeks, and uncertainty, we can bring some hope in our lives and those of others, by contributing our might to those less privileged than us.

Lakshmi Menon, a social entrepreneur from Kerala, has initiated a project relevant for these times. Titled coVeed for Covid, from her social enterprise Pure Living, (where veedu translates into home in Malayalam), it aims to foster a sense of co-existence among the community by sharing what we have and feeling good about doing something worthwhile.

The concept is simple. Lakshmi has created a template of the coVeed, a mini-model of a house on the website, www.coveed.in, which can be downloaded, printed, and assembled just like a pizza box.

Each model can be used to store whatever little provisions you can spare for the needy like grain, pulses, etc. You can also decorate the model with your creativity and write messages of hope and faith. These can be then collected and given to people in need.

Lakshmi is also in talks with the government/ panchayats along with schools on how to distribute grains that people have saved with coVeed.

A coVeed built of A4 paper can hold rice (double boiled) sufficient for kanji (rice porridge) for two persons. This can be a social contribution while we engage in our daily activities in the safety of our homes.

Lakshmi, who has previously contributed to the floods that lashed Kerala in 2018 and 2019 by creating the famous rag doll Chekutty, which became a symbol of hope for Keralites the world over, and a special gratitude initiative for fisherfolk, has always encouraged the community to give to those who make our lives safe, in every way.

During this time, it would mean the healthcare workers, the police, people who provide us with essential services, the banking staff, and delivery persons, etc.

Lakshmi elaborates, “We are able to be in lockdown, because we have a house to be locked up in. There are millions who do not have homes to be in, or food to eat. I felt since we have more time on our hands, and also since the children are at home, this is an activity the family can do together. We can create the house and put into it whatever we have, thereby sharing with others, not only provisions, but also hope to tide this dark period over.”

Lakshmi says that whole idea of coVeed is a “product of my deep sense of guilt, of the fact that I’m totally useless to society, in spite of having time, health, and resources during the lockdown period”.

The idea is that while you are making a coVeed with your family, you are also making memories.

“I feel it will go a long way in bonding and add value to people’s lives because they are sharing with those in need,” she adds.

The project has also evolved from the time it first started.

“Initially, I thought of the coVeed as a curio that could be used as a decorative piece. Then I thought why not use it as a package for many things. Later, I thought why not involve the entire community, and thus a new feature was added to the project,” she says.

Lakshmi urges people to make coVeeds and send their images digitally; the organisation will add Rs 10 for every picture received.

“Since the lockdown began, Kerala set up a number of community kitchens to serve the poorest of poor; these were mainly run through sponsorships. Rs 20 is the price for one meal that can feed one or two people. So, each picture of coVeed I receive can feed one person. This was a different dimension that evolved during this phase,” she says.

Lakshmi believes coVeed can become a symbol of how the community can come together, representing care, empathy, and gratitude. She says there’s no better state than Kerala to offer such a simple, yet effective model. While the government machinery in the state is fighting the pandemic on the frontline, the community is finding ways to assist the government in its own ways.

“Let this also be the time for us to appreciate what we have. I want this concept to go forward as a very positive outcome of these times. The little acts of kindness are ways to express gratitude for what life has given us, and for others who keep us safe,” Lakshmi says.