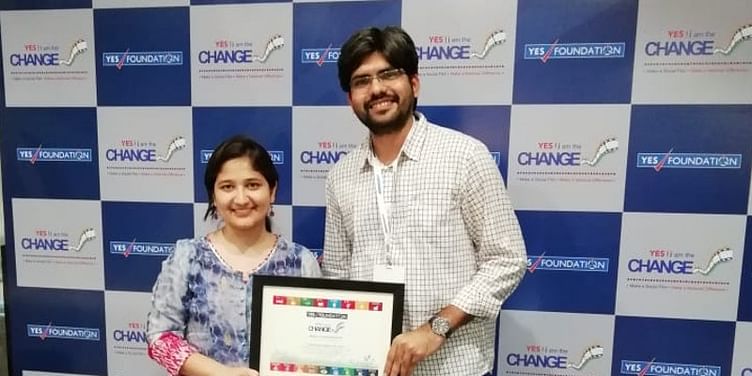 An IIT graduate and co-founder of sanitary startup Saral designs, Suhani Mohan reached out to the Mahindra Group to convert the startup’s machine to make masks to contain the COVID-19 pandemic.

The tie-up is aimed at fast-racking the production process to aid healthcare workers and medical staff who are at the forefront dealing with the life-threatening and fast-spreading COVID-19. At the same time, the Mahindra Group continues to work on other medical necessities such as ventilators as well.

Now as Suhani and Kartik continue to work from Mahindra's Kandivali plant, Anand Mahindra, the chairman of Mahindra Group took to Twitter in appreciation and called the startup's journey a sequel to the Bollywood movie Padman.

Heroes continue to rise. @suhani is an IIT Bombay graduate who moved from banking to entrepreneurship & started making sanitary pads. She wanted to convert her machines to making masks & reached out to my Exec.asst. Shruti, her junior at IIT. A sequel to the movie ‘Padman!’ https://t.co/hCmB1RNXwB

As India saw rising cases of COVID-19, Suhani and her co-founder felt the need to work on a mask-making machine because they had the bandwidth as the technology used to make sanitary napkins and masks were similar.

In an exclusive interaction with HerStory, she said, "By March 15, our designs were ready but we were completely stuck due to the lockdown because no vendors were available for manufacturing."

That is when she started approaching people who could help in her network including Shruti Agarwal, the executive assistant to Anand Mahindra and Suhani's junior from IIT-Bombay.

She said, “I have been writing to many people and was not sure if we would hear back. But within four hours, we got a reply and Anand connected us to the head of Mahindra Automotive. They helped us in a big way by supporting us in all our requirements. And within 100 hours after receiving that email, we were able to set up the manufacturing unit."

Currently, a day into production, they have produced 3,000 and hope to ramp up the process to making 10,000 masks a day within eight to ten days.

“Currently, the masks are being distributed via Mahindra Group’s CSR wing to government hospitals, police and everyone who has to be on the field," the 30-year-old entrepreneur shared. After the mask production is successfully ramped up, they hope to distribute it to the general public as well.

Contd. - Video shows the plant ready to start production of these 3-ply masks from tomorrow. Will ramp up to 10,000 per day in 10 days. Filter layer with Bacteria filter efficiency of 99.95%. UV sterilised. ⁦@saral_designs⁩ ⁦⁦@anandmahindra⁩ ⁦@MahindraRise⁩ pic.twitter.com/SkdPHpNdZF

Suhani, who was also an Acumen India Fellow, tweeted her appreciation towards the Mahindra Group for coming onboard.

We are extremely grateful to @MahindraRise for the generous support. Your team has shown the true meaning of leadership and collaboration to make 3ply masks for our frontline workers in the shortest timeframe with @saral_designs #IndiaFightsCoronavirus #Masks4All #COVIDー19 https://t.co/4Ia7e9JXE0

Suhani is no stranger to challenges and had started Saral Designs in 2015 after leaving her job as an investment banker at Deutsche Bank.

Along with her co-founder, she hopes to fill the gaps of accessibility and affordability of menstrual hygiene products, especially in the economically backward areas of India.

The duo claims to have made India's first decentralised automatic machine to produce sanitary pads. So far, It has sold the machines to more than 30 entrepreneurs and non-governmental organisations (NGOs) in Tier-II and Tier-III cities and impacted over 200,000 women by selling more than 6.5 millions of pads in five years.

In 2015, the startup raised an undisclosed amount of funding from angel investors at IIT Bombay alumni network and from Acumen in 2017.

The duo's work has been recognised with several accolades such as the National Entrepreneurship Award by the Ministry of Skill Development and Entrepreneurship and top global hardware innovation for social good by American Society of Mechanical Engineers (ASME i-show).