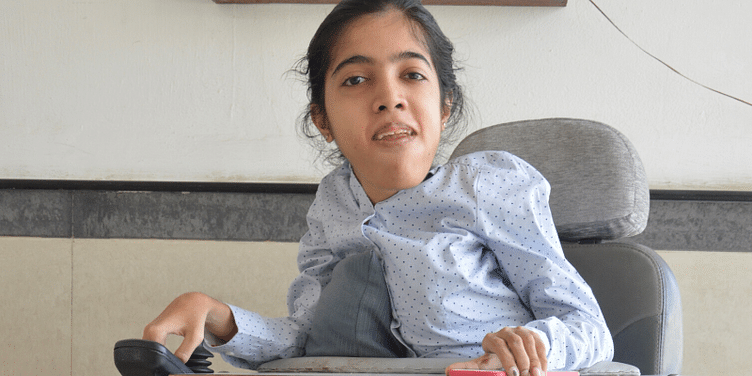 When Maitri Shah was just six months old, she was diagnosed with congenital muscular dystrophy. Caused by a rare deficiency of a protein called Merocin, muscular dystrophy leads to muscle weakness, and thus, impaired mobility.

However, this did not deter Maitri, who – supported by a loving family – went on to get a bachelor’s in computer science engineering from KJ Somaiya College of Engineering, Mumbai, in 2016, and also became an entrepreneur.

In fact, she received the first rank in MHT CET in the PwD (person with disability) category after scoring 95.09 percent in the SSC examination in 2010. At present, Maitri is pursuing an online master’s in computer science from Georgia Tech University.

In 2012, she started an NGO called WillsOnWheels to engage, educate, and empower people in wheelchairs.

Carving her own path

Maitri says no company was prepared to hire her during the last year of her bachelor’s, and she was left with no choice but to carve her own career path.

To make sure other disabled individuals did not have to suffer the way she did, Maitri launched Mind Assets in 2017, a tech startup with three goals.

“I wanted to provide online digital opportunities for people with disabilities so that physical infrastructure was not a barrier to start a career. I aim to connect and enable organisations to candidates with potential and help them to navigate challenges to get the best results from them. I also want to upskill PwD candidates with job-friendly skills,” she explains.

“According to reports, there are 70 million candidates with disability in India. That’s almost the same as the population of the UK! When we start looking at the numbers from that point of view, we’re in a position to really understand the need for ensuring that wealth creation and inclusivity go hand in hand,” she adds.

Mind Assets is focused on introducing “merit-based inclusivity” to India. The organisation has introduced several firsts in the industry. It has focused on enabling companies to take advantage of financial government benefits, align with the gig economy, enabled employee stability and reliability, find project-based talent, get anytime-anywhere employees, save on infrastructure by working from home, among others.

In 2019, Mind Assets introduced a new programme, MindMentor, to enable mutual benefits for mentors and mentees. The concept is unique in terms of making the mentorship activity beneficial for mentors beyond just networking.

Mind Assets claims to have successfully helped people find their niche and also make an income. She presents a few examples of women who have benefitted from their programmes.

“We have a graphic designer from West Bengal remotely working for a firm in Mumbai. A content writer from Bengaluru is working from home for an organisation in Pune. A social media executive from Nagpur is virtually working for a solo entrepreneur based in Mumbai. These candidates are ambitious, digitally savvy women, who happen to be mobility impaired – either due to genetic defects or an accident,” she says.

Initially bootstrapped, Mind Assets recently received partial funding (undisclosed). It is incubated by RiiDL and UnLtD India, which helps with mentorship and outreach.

The organisation has a small team of three, whose work is divided into ideation, execution, and challenge troubleshooting with a few overlapping responsibilities.

Mind Assets’ current revenue model depends largely on placements. “We also offer consulting services with organisations willing to be inclusive. However, at this stage, we’re happy to say that we have enabled significant wealth generation for candidates and many of the companies recruiting through us,” Maitri says.

Unlike other companies, the young entrepreneur says, Mind Assets’ operations have not been drastically impacted by COVID-19 as they are a digital-forward startup. However, traditional companies have suspended their recruitment so not many verticals are fully operational at the moment.

In the end, Maitri says disability is a 'perception' issue.

She explains, “It’s about what society and people believe you can do when you have any kind of disability. I don’t think disability comes in the way of being an entrepreneur.”

According to the entrepreneur, the skill lies in recognising that even within teams, when a manager recruits, they are recruiting members who can bring in complementary skills so that the team’s work goal is met.

“Similarly, when one member in a team has a disability – one simply identifies members with complementing skills. At the end of the day, what matters is that the work gets done, and how many barriers are overcome each new day,” Maitri says.