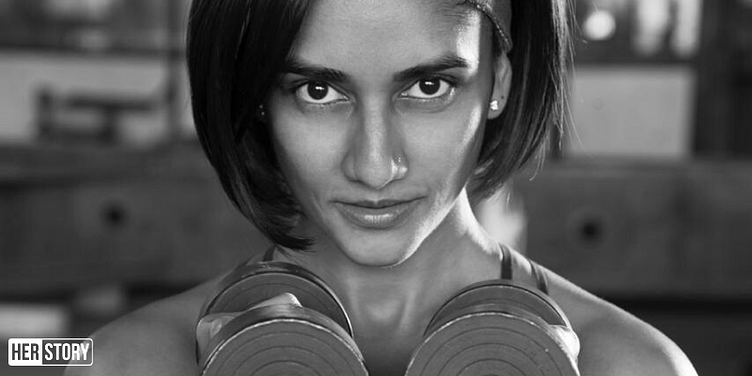 Swetha quit her corporate career and followed her passion for sports. A chance offer led her to become a fitness trainer, and now she has her own startup - Sweat by Swetha and Sisters in Sweat, a football and fitness community for women.

After completing her Economics degree from University of Toronto, Canada, Swetha Subbiah joined Ernst and Young in Bengaluru as a consultant. She had a well-paying corporate job and enjoyed her work. But two years into the job, she realised she was not passionate about it.

As a young child, her love and passion for sports was abound. In fact, she was part of every sports team in her school. She even played for Karnataka’s Under-16 hockey team. However, sports took a back seat when she had to appear for her board exams. After finishing her grade 12, she went to Canada to study Economics. Due to her busy schedule, she was again not able to play any sport while at the university. She took time out to train at the university’s gym, which didn’t give her the same high as playing a sport, she recalls.

After returning to India, her desire to get back to the sports field led her to quit her job in 2009. She was looking for a new job that would demand more physical activity.

Incidentally, she met an entrepreneur who was looking to open Bengaluru’s first luxury health club, and Swetha got on board to help set up the club.

Two years later, when the club opened its doors to its members, Swetha decided to become a personal trainer.

“At the end of two years, I was again starting to feel that itch to get back to the sports field. I couldn't play for a professional team because I was much older and hadn’t played professionally, and so I was looking for something else. I decided to give personal training a shot,” says Swetha.

Three months of observing the trainers on the floor and helping them out, Swetha knew she was completely invested in becoming a professional fitness trainer.

Working as a trainer on the gym floor, Swetha was the only female trainer amidst 35 male trainers.

She says: “The challenge was there was no one I could relate to because all my colleagues were men. As a woman, starting off back then when all trainers looked a certain way - big and muscular men - people and my fellow instructors, and some members of the gym thought 'What is this little girl doing on the floor? How is she going to be a fitness instructor for us?’”

Swetha did not let the stereotyping affect her. She was strong-willed, and continued to work hard to prove her mettle as a fit and capable trainer.

Another challenge that she had to deal with was the assumption that fitness trainers could not do well in academics, and thus chose this path. “Today, being fitness instructors, we know that we need certifications and there is a lot of science behind designing a programme. People are waking up to the fact that you don't want to hire an instructor who is not certified,” recalls Swetha.

After five years of working at the luxury health club, Swetha decided to branch out and start on her own. She entered the fitness consulting industry and set up Sweat by Swetha, which provides end-to-end fitness consulting services to clients, commercial gyms, and corporates.

Swetha’s first big gig was to set up a gym in Indiranagar, Bengaluru, which was acquired by Cultfit later. Today, some of her corporate clients include Smartworks and SAP. She also conducts personal training sessions to athletes. She has helped the likes of tennis player Rohan Bopanna, and is also the fitness trainer for the Karnataka State Football Association.

Swetha is also one of the only four trainers in India to be certified by Nike, and also featured in their ad campaign alongside India’s female athletes and trainers.

This 14-year-old has developed a robotic tool prototype that aids in kinetic movements of fingers, hands, arms

Swetha met former Fulham and Tottenham footballer Tanvie Hans at one of the ad shoots three and a half years ago, which was a turning point in her life. Tanvie was in the process of shifting base to India to make a difference in the football scene in the country.

The two became close friends, and Swetha introduced Tanvie to a friend who was keen on learning football. Tanvie asked her to get more people, and the two conducted a fitness and football session. Seventeen women showed up and expressed their desire to make it a routine. They turned it into a Sunday ritual, created a WhatsApp group and called it ‘Sisters in Sweat’.

Today, Sisters in Sweat is an incorporated partnership between Swetha and Tanvie. The latter recently captained the Karnataka team, and plays in the Indian Women’s League. From seventeen members, the group now has over 350 members.

Apart from the Sunday sessions, it provides football training during the week and beginner sessions to women. Last year, it also organised its first football tournament for women.

Though the coronavirus pandemic and the subsequent lockdown has stopped their practice sessions and meet-ups, the activities have since then shifted to Instagram live sessions. The week begins with a yoga class on Monday, and Swetha conducts a high-intensity workout. Thursday is a Q&A session with an inspirational woman, followed by Tanvie’s footy session on Friday and a Sunday dance lesson. Swetha now plans to add new sports to the roster.

The changes infused due to the coronavirus pandemic has been an eye opener for Swetha. With physical distancing and sanitation measures becoming the norm, Swetha is planning to build an online platform for all her clients.

Speaking about the post-COVID changes, Swetha says, “One part of me believes that once things get back to normal, it's only a matter of time, maybe 3-6 months, and people will practice social distancing, but before you know, I feel things will get back to the way it was. The other part of me feels that this is going to cause a lasting impact.”

“I have worked in gyms for over a decade now and very often you see people coming in and not wiping down the equipment, I think people will be a lot more aware of that. Social policing in that sense - if you don't wipe down an equipment after you use it, somebody will ask you to do it. In that sense, people are just going to be more hygienic and will practice social distancing,” Swetha feels.