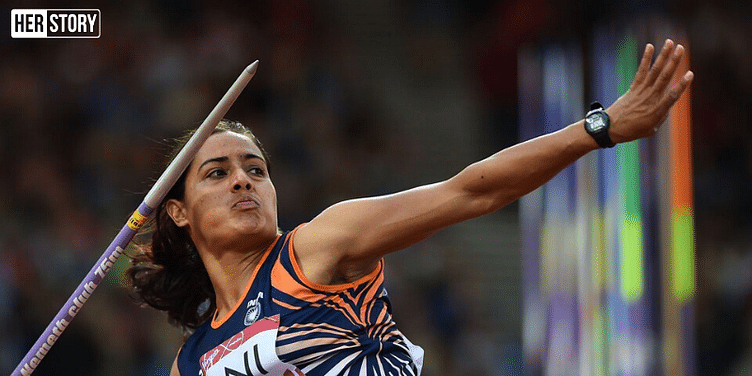 National record holder and Asian Games medallist Annu Rani’s journey to becoming the torchbearer of javelin throw in India was tough. She proves that no matter the number of obstacles, hard work, and talent will take you through.

Annu Rani, India’s record-breaking javelin athlete, is nonchalant when asked about her achievements, especially that of being the first Indian woman to surpass the 60m mark in the javelin throw.

“Itna kuch toh nahi, haan theeke. Koi bohut zyada badi baat toh nahi hai” (It’s okay, it’s not a very big achievement), she tells HerStory over the phone from NIS Patiala, where she has stayed since her hurried return from a training camp in South Africa, just prior to the announcement of the nationwide lockdown. Annu holds the current national record with a throw of  62.34m in March 2019. She has broken the national record multiple times.

Behind this nonchalant manner is the story of struggle and determination to follow her dreams.

Hailing from a small village of Bahadurpur in Meerut district of Uttar Pradesh, Annu’s father is a farmer, and she has four elder siblings.

Her dream as a kid was to study in a good school and get a quality education. However, the family couldn’t help her accomplish this. She knew that if not education, sports held the power to help her become something.

At her school, three kilometres away from her home in the nearby village, Annu was engrossed by shotput and discus throw. In Class 9, she wanted to win the sports championship award in the school which required one to win three medals. She soon decided to enrol in javelin throw as well to ensure her the third medal.

“When I saw it for the first time, I thought this is so easy, anybody can throw this,” says Annu. However, with years of practice and experience, she says that it involves more than just “throwing” the 800-gram metal javelin. It involves immense strength, core power, immaculate technique, and form while sprinting and jumping, and mental training to be able to throw the javelin the farthest.

Struggles along the way

Her journey to take part in sport was not easy. When she started becoming serious about javelin, during her school days, she would walk to the school in the evenings — three kilometres to go, and three kilometres to come back — to be able to practice.

Due to a lack of facilities in the village and not being able to practice a lot in school, Annu made a makeshift ground in her father’s field to be able to practice. Her sister would stay with her until late after dark to watch over her.

Her father, who was not ready to let Annu take up the sport, would later wake up with her at 3 or 4 am in the morning, and accompany her on his cycle while she ran. He would also accompany her to competitions in different cities. There would be neighbours and people in the village who would chastise her father for letting her play a sport. She says that many think that even today.

Annu’s elder brother used to practice for cross-country, but due to the situations at home, he had to give up his dream. He later supported Annu to fulfil her dreams.

When she was called up for the Indian camp in 2012, her father refused to send her alone to Patiala where the camp was being held. Her father wanted her to concentrate on her studies, and probably get her married after that. Her family was scared that going to the city and living alone would spoil her.

The youngest child in the house, she was adamant, and the family agreed later. She had forced her brother to convince their father that being selected for the Indian camp was a big deal, and the opportunity provided her to practice at good facilities with trained coaches.

"In the beginning, everyone has to struggle. There are tough situations. It is what happened to me too. But only when we go through these struggles and achieve success, we become stronger than before,” says the Asian Games bronze medallist.

She recalls, in her early days, the family would struggle for money to book tickets for her to go to competitions. She would sometimes sleep on the floor of the trains while travelling, or borrow money from neighbours to book tickets. Sometimes she would miss out on some competitions because they couldn’t meet the finances.

The will to continue

Despite the many challenges that came her way, Annu was determined to follow through. The support of her family and her school coach Dharampal Ji helped her continue forward. When the school refused to let her borrow javelins as she would often break them, Dharampal Ji would buy her bamboo javelins to practice.

Once, her school disallowed her from practising because she accidentally broke a flower pot during practice. She found a ground at an ashram devoted to Swami Vivekananda to practice. She considers the saint her guide and depends on his literature for motivation.

Being an athlete and travelling to various countries has helped Annu break out of her shy shell. She says that early in her career, she would find it difficult to practice with boys because, in her village, she was taught to walk with her head bowed down and not look up at men and boys. Her experiences later led her to realise that men and women are the same, and they deserve the same education and opportunities, unlike what was prevalent in the village.

She found it extremely difficult when she had to attend training camps abroad because she is a vegetarian, and had a tough time with the food. It took her time to adjust and adapt to conditions. At present, she says it has become a habit. She is now more open to people and different scenarios.

"When I started taking part in competitions, I used to think I am from the village, there are no facilities there. I used to think that girls who came from the cities and well-to-do families could only do well because they had better facilities. It was only after I competed at various levels that I realised that it is not true. If you have the talent and work hard, nothing else matters,” Annu says.

The shyness and fear would often creep up when she would face international opponents. She recalls being intimidated by their superior strength, experience, and height. She would often fear the opponent making a good throw, and surpassing her. Now, she has changed her process and concentrates on herself and giving her best. She feels that this gives her a better chance at a medal, rather than focussing on others.

Annu has achieved several feats, including becoming the first Indian to reach the finals of javelin throw at the IAAF World Athletics Championship in October 2019, and the first Indian woman to win an Asian Games medal in the javelin in 2014.

She has also broken the national record at least three times and performed better than world record holders and Olympic medallists in recent competitions. Her performances have even earned her an officer rank job with the Indian Railways.

With these and many more achievements, Annu now has her eyes set on the Olympics medal. She believes that she has all the capabilities to win an Olympic medal, and is focussing on improving her power and technique to be able to achieve that feat.

With her grit and determination, Annu is certainly well poised when it comes to achieving her dreams.

Earth Day 2022: 5 startups championing the cause of biodegradable sanitary napkins