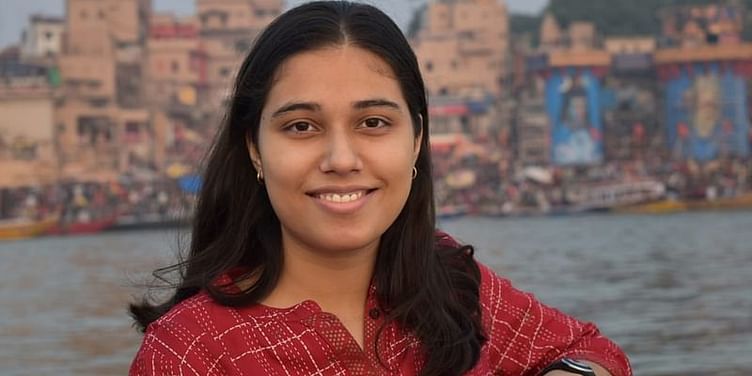 Before speaking to Saloni Gaur, I had just finished watching her DU wali didi video where she speaks on the perils (and privileges) of appearing for exams online.

Beyond the Lola Kutty frenzy, can the real Anu Menon stand up?

The 20-year-old final year student of BA Political Science and Economics at Delhi University is confused about how she will appear for her “open book” exams online next month without WiFi at home, like many others. Hence, the sarcasm is rightly in place.

While the DU walli didi is a recent characterisation, she is best known for Nazma Aapi, dressed in black and having a thick Western UP accent. She has an opinion on the Arnab Goswami-Kunal Kamra spat, PM Modi’s speech, and everything current and in-between.

Her impersonations of actors Kangana Ranaut and Sonam Kapoor has her followers in splits, with Sonam even messaging her that she spilt her coffee laughing at the video.

Saloni’s comic journey on the internet began three years ago after she moved to Delhi from her hometown Bulandshahr, Uttar Pradesh for her graduation.

“Everyone was on Instagram, but I didn’t know I could make a video for the platform. My friends always thought I was funny, so I thought why not give it a try? And like they say, there was no looking back after that,” Saloni tells HerStory.

Since childhood, the comic has been a pro at mimicking people. When she mimicked her English teacher in class, he was very impressed and encouraged her to pursue it.

“He was a sport and he had a sense of humour which is very important,” she says.

Despite her popularity – 178,000 followers on Twitter and 294,000 followers on Instagram – Saloni faces a lot of trolling for her portrayal of various characters. Does it get to her, as she is still young?

Trolls have a sense of humour?

She believes even the trolls have a sense of humour as they like her videos and then post disgusting comments.

“They are just keyboard warriors, like cheap internet. Initially, I felt sad because they would troll me on anything, even if I am making fun of my own family. Gradually, my brother who is also a YouTuber, explained to me it’s all a part of the journey. The best way to deal with them is to not deal with them at all,” she says.

Which brings us to her most popular character, Nazma Aapi, for which she has also been accused of cultural appropriation. Her head wrapped in a black shawl, Nazma Aapi, a Muslim woman from Western UP, has an opinion on everything – with topics ranging from TikTok vs YouTube, opening of liquor shops, coronavirus outbreak at Zee News office, and even has a message for China. Clearly, a no-holds-barred character if there was ever one.

Saloni says the idea of Nazma Aapi came to her during Eid and she discussed with her brother on how the character would take shape.

A satirist who never takes sides

“I am a satirist and never take sides,” she says in response to some of the backlash the character has received. “My father has a lot of Muslim friends who speak the dialect and I just picked that up. Along with it, I am good at impersonating people. That’s all there’s to it.”

Has she always been this politically aware? Nazma says while growing up, her father had only two conditions before she left for school – to have a good breakfast and read the newspaper. After her father returned from work late in the night, they used to watch the news together. “That’s how I became politically aware and continue to be. Also, as a student of Political Science and Economics, this knowledge helps me shape my opinions.” Her comic timing, she insists, comes from her grandmother who used to crack jokes all the time.

But in the current scenario, voicing one’s opinions to a large following can also get you into trouble.

“Yes, one needs to be careful about what one says. People can body shame you online and say anything they want. People tag you with labels. All I want to say is I am neither a leftist nor a rightist. I am just a satirist who speaks about everyone. I am speaking against the government, I will also speak against the opposition,” Saloni says.

On the controversy surrounding her video being removed from TikTok, she says it’s unfortunate because there are so many other vile ones that continue to remain on the platform. The video took a dig at China for its cross-border activities.

During the lockdown, Saloni shifted from her DU hostel to her home in Bulandshahr. “Only location has changed. I have also introduced new characters like DU wali didi and Sasu Maa.”

The young comic also collaborates with brands and is very conscious of whom she chooses to collaborate with. She admires Kangana for refusing to endorse fairness creams and says she wouldn’t do it either. “I will not do anything to compromise myself, even if lose money.” She has so far tied up with brands like Ludo King and Kuvera.

In the beginning, she started with random rants, but has now evolved her style by writing a script, saying that has made her videos more ‘responsible’.

Though her parents initially wondered if being an internet star was a good career choice, they have come around to their children making money off the internet and are quite supportive.

She aims to become a stand-up comic and perform for a live audience once the pandemic is over. She is looking for more opportunities to perform via Zoom and hopes it will take off soon.

Till then, we will continue to laugh at the antics of Nazma Aapi, DU wali didi, Adarsh Bahu, Sasu Ma, and other characters. Saloni has us ROFL, literally!