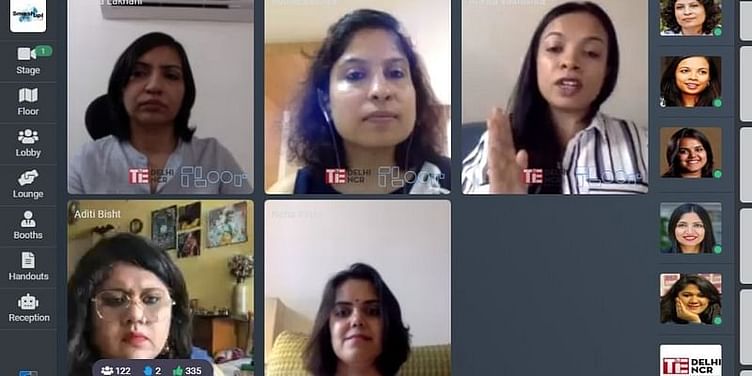 An all-women panel of entrepreneurs and investor deliberate on skewed funding towards women entrepreneurs, finding the right product-market fit to raise smart capital, and mental health.

In the first eight months of 2016, 670 funding deals worth $2 billion were sealed and a mere three percent of it went to women entrepreneurs. The skewed funding towards women entrepreneur continues to be a concern in India's startup ecosystem where last year, women entrepreneurs received only 6.5 percent of the funds raised by top 150 funded startups in 2019, according to Venture Intelligence.

Coronavirus pandemic harder on women, but they can cope better: Prof. Dafna

Ankita Vashishtha, Co-Founder and CEO of SAHA Fund, the first Venture Capital Fund to invest in women-led tech startups, said that the core issue regarding women entrepreneurship is lack of access to network, capital, and opportunity.

“Platforms for women entrepreneurs need to be more disciplined and focussed on result like onboarding some client, driving business, or infusing institutional money, and all funds should be mandated to have equal representation in their portfolio,” Ankita added.

The venture capitalist further asserted that funds dedicated to women are not charity fund but a merit-based fund “that brings focus to women entrepreneurship in the same way several other funds are focussed on healthcare, cloud or mobile companies.”

Firm belief to sail through challenges

Panellists Neerja Lakhani, Founder of Inner Sense; Komal Baldwa, Founder of Bleu, and Ankita unanimously agreed that investing effort and money from one’s own pocket as an entrepreneur in the initial stage reflects the entrepreneur's faith and belief in the idea.

“We should try with our own money first instead of asking funds from outside. How will someone else believe in your idea if you don’t?” said Neerja whose anti-microbial and eco-friendly lingerie startup was bootstrapped for three years before raising Rs 2.5 crore as part of Pre-Series A round from Venture Catalysts in 2018.

The entrepreneur said she sought to raise funds only after finding the right product-market fit, the preparation for which included turning to feedback from the most critical friends in her circle.

“After clarity on what works and what does not, I went ahead to launch with confidence, and met with great response; the products were sold out faster than we anticipated,” she recalls, adding that challenges continue to be part of an entrepreneur’s journey as long as they are doing something different.

As an entrepreneur venturing into the sexual wellness space with a nontoxic condom startup Bleu, Komal is no stranger to challenges.

“I was snubbed by men who would tell me that condom is a men’s arena and they can handle this best. But, it goes inside the female’s body and affects the female counterparts as well,” she shared.

Bootstrapped so far and “pivoting according to customer’s need”, Komal believes that it does not make sense as an entrepreneur to play with other people’s money if one is not confident of utilising their own money and resources.

“Even with limited resource, every idea can be tested out with small group of people. Believe in your idea to get other people believe in you. And when you back it up with your effort and savings, that makes me feel more confident as an investor,” Ankita agreed.

The key, she added, is to raise smart capital by reaching out to the right capital. An investor should understand the entrepreneur’s idea, vision, and be able to help them scale.

Neha Kirpal, Co-founder of Mumbai-based mental health startup InnerHour, has learnt after surveying seven lakh people, that despite the stigma attached to mental health, Indians are willing to explore options anonymously from the comfort of their homes. Technology plays a key role in access to mental health, she added.

The entrepreneur attributes the startup’s organic growth to this willingness, stating, “When people realise their strengths and weaknesses in terms of mental health, they automatically want to improve that.”

Speaking of gendered roles in society, Neha added, “Entrepreneurship comes from a place of self-belief and wanting to realise one’s potential. And despite societal conditioning viewing women as mothers and wives first, our internal perception of self matters most. If that is of doubt and not strong enough, then we are open to everybody’s perception about us.”

However, Ankita said that pregnancy and marriage should not be a reason for women to step down from their professional and entrepreneurial pursuit, adding “Companies need programmes to orient employees back after six months, especially as global workspace is increasingly becoming more flexible in the new normal post COVID-19.”

“Women are enterprising every day, whether as entrepreneurs, housewives, or a professional. We are always multitasking and solving problems with empathy and understanding for all,” Neha said.