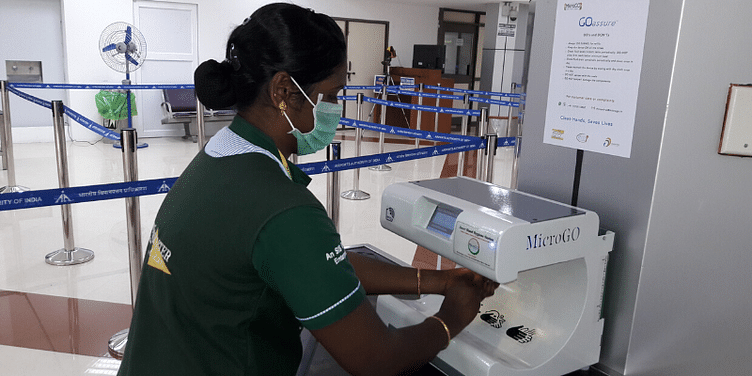 MicroGO, founded by microbiologist Rachna Dave, is a biotech startup whose hand hygiene device has been installed in several airports and enterprises across the country.

﻿MicroGO﻿, a Chennai-based biotech startup, has seen a rise in installations of its IoT (Internet of Things) enabled hand hygiene device during the coronavirus pandemic. Founder Rachna Dave claims that it has installed around 180 units of its GOassure device since March 2, 2020, across various cities.

First installed at the Chennai airport, the GOassure was later added at other Airport Authority of India controlled airports in Baroda, Calicut, Hyderabad, Guwahati, Pune, and Kolkata, among others. The devices have also been installed at various enterprises like Taj Group, ﻿Bigbasket﻿, Tata Capital, COVID-19 laboratories, Apollo Hospitals, Indian Oil, ﻿Waycool﻿, IRCTC, and many other PSUs.

Speaking about hand hygiene, the microbiologist and founder says, “We believe that hand hygiene is the first line of defence for every person — you, me, industries, and everywhere. If your hand hygiene is sorted, most communicable Infectious diseases can be prevented."

In conversation with HerStory, Rachna Dave talks more about her startup, her company’s approach, and products.

After completing her PhD in Microbiology from NYU, Rachna returned to India and joined the Bhabha Atomic Research Centre (BARC) as a scientist in 2008. She worked at BARC until 2016, when she quit to start her R&D based biotech manufacturing startup, MicroGo.

In the same year, the Indian government had rolled out the Startup India initiative, and Rachna decided it was the right time to take the plunge and started MicroGO from her savings of around Rs 15 lakh. She later received investments from angel investors Mithun Sacheti of Caratlane and Manoj Ajmera of Ajmera Group, and grants from BIRAC, the Department of Biotechnology, Government of India, Grand Challenges India from BIRAC +  Bill and Melinda Gates Foundation, ICO fund from IKP, and the ACT grant.

The reason why Rachna decided to launch in this space is because she realised that no company was dedicatedly working towards micro-level cleanliness with a holistic view.

“I felt that three phenomena — global travel, climate change, and infectious diseases — will affect the three most important things relevant to the entire world, which is food, water, and health,” says the 39-year-old founder. This is why MicroGO’s products are directed towards cleanliness in food, water, and healthcare.

This is why the company’s R&D involves anchor customers in the process to ensure that time, money, and efforts bear fruitful results.

All MicroGO products focus not just on hygiene but also sustainability. Rachna says that the startup uses the ‘safe and save’ approach. Its products are developed to keep lives safe and save essential resources in the process.

She started the company building solutions that kept life safe. However, after realising the effects of climate change on farmer’s produce, crop wastage, and careless use of scarce resources like water, the entrepreneur decided to create products that also helped save the resources.

Building on this approach, MicroGO has developed IoT-enabled hygiene devices that allow real-time monitoring to ensure all Standard Operating Procedures (SOPs) are met. Apart from GOassure, which is in heavy demand during COVID-19, it also manufactures devices like GOsteri, which can be used for sterilisation of surgical instruments and requires no water and electricity.

It has also developed GOclean which is a disinfectant spray for surface disinfection and GOpure, for disinfection of domestic and sewage water.

The startup also has its patented technology platform, Tubelet, which uses chlorine dioxide without contaminating the treated water with any chemical residues. Since its launch, MicroGO has filed seven patents and eight trademarks. The B2B startup has also racked in revenue of close to Rs 70 lakh reveals Rachna.

Even though the current global health crisis has increased awareness about hygiene, Rachna believes that there will come a saturation point, at least for individuals and some sectors where hygiene is concerned. However, the startup is working in the space of food, water, and health — topics that will forever remain relevant for all.

Apart from installing devices in various places amidst the pandemic, Rachna is focussing on taking her device GOfresh to more farmers, aggregators, and mandis come next year. She is also working on regulatory access for GOsteri to take it to the market soon.

Under the Grand Challenges India programme facilitated by BIRAC and Bill and Melinda Gates Foundation, the startup is now working to reduce infant and maternal mortality rates with a holistic approach. Rachna says that the startup is increasing its focus on R&D and working on some interesting innovations.