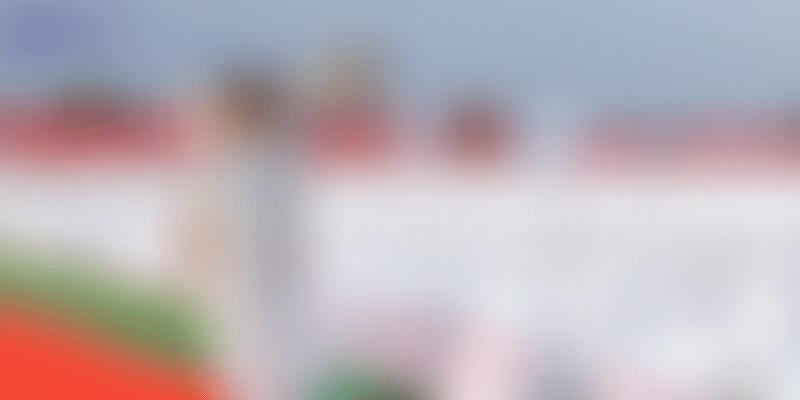 Amid the coronavirus pandemic, Ruchira Gupta, who is the founder of Apne Aap Women Worldwide, launched 1MillionMeals to ensure the supply of food and dry rations to marginalised families.

Three days after a nationwide lockdown was announced in March to stem the spread of COVID-19, Ruchira Gupta, Founder of Apne Aap Women Worldwide, received a distress call from a 12-year-old living in a red-light area in Delhi.

The girl was the daughter of a sex worker who had been sent home from boarding school due to the lockdown. She was one of the many children sponsored by Apne Aap, an organisation that helps victims of sex trafficking and children in many parts of India.

This panic call galvanised Ruchira into action. She immediately asked a friend to arrange for 500 quick meals to be distributed in the area.

“Soon, I began to get messages from Bihar, Kolkata, and other places, from women and children who were starving. They had sold off everything to feed their children and the situation was not going to change anytime soon,” Ruchira says.

Ruchira says COVID-19 has been particularly disastrous for victims of sex trafficking and their children. They have lost their income. Many of them stayed 11 to a room with no windows, and were confined to their space. Without access to education, their children’s future also looked bleak and uncertain.

Her immediate focus point was food, and in just a matter of days, she launched 1MillionMeals, which has now become a metaphor for millions of meals distributed to these marginalised families over the past three months.

What began with cooked meals turned to distribution of dry rations – a bag of rice, onions, dal, potatoes, spices, soap, cooking oil, masks, etc. Her volunteers would take ration for 50 families, and 200 people would line up. The organisation then started arranging truckloads of these.

“Though the government said it was distributing food, it was not reaching these women and their families. We must also understand that these women were kidnapped at the age of 12 and 13 and forced into prostitution. They were also not respected and were often forgotten,” she says.

Ruchira’s worry was that the women’s occupation also put them at risk in the time of COVID-19.

“They should neither be available for sex nor should anyone have intimate contact with them. Would the government create a kind of humane pathway for them, prevent suicides, and their children being orphaned,” she asks.

She felt that until these women found a favourable exit from the situation they were in, they needed all the help they could get.

Support has poured in from the country and all over the world since the initiative was launched.

“I will have someone call me and say I can contribute 50,000 sanitary pads and they would also make sure it’s delivered at the right places. India Gate gave us truckloads of rice; a company in Indore offered spices and many offered cash too,” she shares.

Distributing the food was rife with many challenges. Ruchira is on her phone and laptop from early in the morning to late at night, ensuring hundreds of different things – checking if trucks have crossed state borders, loading and loading, packing, and making sure perishable food is distributed on time.

Along the way, she learnt the intricacies of supply chain management and managing situations, with a help of a large team of community enablers in different parts of India.

Her initiative largely spread through word of mouth and with celebrities like Chef Vikas Khanna and actor Abhay Deol talking about it on social media.

In three months, she has also put into motion a beautiful chain of giving and receiving that she calls “Give India, Share India”.

Most of the help has come from unexpected quarters: small-scale businesses and merchants who wanted nothing in return, not even a mention on social media. She says with one call they would be ready to offer a thousand pairs of shoes to migrants returning home or anything else they might need.

Already faced with the challenge of food distribution, disaster struck again with Cyclone Amphan in West Bengal. So, along with the food, they would pack tarpaulin and other essentials to help people tide over the crisis.

Within 100 days, the initiative crossed over five million meals. and the journey continues as cases of coronavirus surge and the uncertainty persists.

To understand the reach and impact of 1MillionMeals, it’s also imperative to understand Ruchira’s story and the formation of the Apne Aap Women Worldwide.

As a journalist, Ruchira travelled to Nepal and saw scores of villages with missing girls, who were kidnapped and forced into prostitution.

She followed their trail and made a documentary, The Selling of Innocents, in 1996, on the lives of these women in brothels in different parts of India, which also won her an Emmy Award.

“This documentary was a life-changer for me. As a journalist, I had seen war, hunger, and famine, but I had not seen this kind of exploitation of women. I went to brothels in Bihar, Kolkata, and Mumbai, and would see girls as young as 13 forced to have sex with people over 40. There were pimps and other people exploiting them,” she recalls.

Around that time, Ruchira had joined the United Nations and was helping them develop laws and policies. She presented the documentary to them and mobilised different delegates from NGOs and governments, for a new law on human trafficking.

In 2002, she showed the same documentary to the US Senate, to create the first US law on trafficking and continued to use the knowledge and information she had to help victims of sex trafficking. She also used it to educate villagers in different countries like Nepal, Thailand, Cambodia, and others on what would happen if they let their daughters go.

During this stint, she also helped countries create national plans of action against sex trafficking. Somewhere along the way, she realised her own country did not have laws and policies in place to stop sex trafficking.

While filming her documentary at a brothel in 1996, a man pulled a knife out at her. Instantly, she says, the women formed a protective circle around and told the man that he would have to kill them first.

“These sex workers had told me their stories, and, in 2002, I felt I needed to provide more help and infrastructure to make their lives better. I founded Apne Aap, which means self-action in Hindi. It’s a collective mode of self-action, which includes all these women,” she explains.

Apne Aap’s business plan was based on the four dreams of women: education their children, having a room of their own (independent and safe housing), a job in an office, and justice.

Ruchira points out that trafficking in India is inter-generational and often passed on from mother to daughter.

“We based our work on these four dreams and realised we had to do it in partnership with the government – procure Aadhaar cards, give them access to government welfare, low-cost food, housing, and others so their vulnerabilities were reduced,” she says.

The volunteers would teach them to form saving circles so that they could start their own businesses, a tea shop or grocery store, and become self-sufficient.

Ruchira, who is also the inspiration for a comic book feminist superhero, wants to help the 1MillionMeals initiative embrace one million dreams.

‘Building up the women around you’: Key takeaways from women leaders