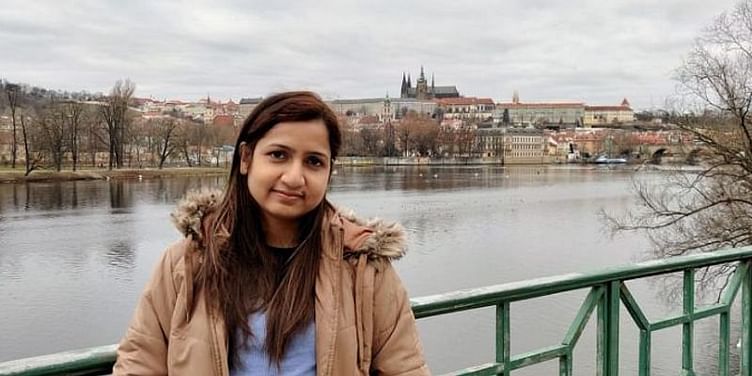 After nearly a decade of working in corporate entities and startups, Sonam Choudhary is now building Mumbai-based edtech startup Glossaread as a co-founder. Catering to college-going students in Tier II and III cities, the startup hopes to soon close an institutional funding deal worth Rs 3 crore.

In May 2012, Sonam Choudhary was leading a small team as Manager of International Business for Tata Motors in Johannesburg, South Africa. A year into the job, she felt climbing the corporate ladder helped a little in furthering her life’s mission: to create societal impact in three key areas of healthcare, education, and infrastructure.

“In a large company, it is very difficult to have a real impact and bring change. Also, entrepreneurship was always on my mind to serve for the greater good of society,” she tells HerStory.

In 2013, the IIM - Ahmedabad alumna joined a Mumbai-based loyalty and customer engagement company Loylty Rewardz where she went on to head the startup’s banking business and assume the role of associate vice president.

From Punjabi to Sanskrit, this edtech startup is making learning Indian languages relevant

Based in Mumbai, Glossaread has moved from “sachet-based content consuming model to a more comprehensive solution” in the higher education space. The startup creates and curates complete study material as per semester-wise syllabus of various universities, with college-going students in Tier II and Tier II cities in mind.

Emphasising that Glossaread prioritises affordability and accessibility, Sonam says it operates on a subscription-based model where study materials for one semester is priced between Rs 249 and Rs 499, depending on the course.

This includes notes, presentations, lecture, and reference videos, MCQs, and question banks with answers for engineering, B.Com, and BA courses.

Hailing from a family of doctors in Bihar, Sonam recalls two incidents that prompted her to start her first venture, GetMyVaccine.com which focuses on raising adult immunisation levels in India.

She had lost one of her close friends in college to swine flu, which was a preventable disease. Additionally, she noticed that adults in India were ignorant of getting vaccinated, almost in denial of its efficacy, while most people in abroad were highly conscious of it.

“People would visit these vaccination clinics and ensure all adults are also taken care of while in India that trend is just not there,” she says. Sonam persisted on the idea that one need not go for treatment when it can be prevented.

However, after running the startup for two years, Sonam realised that the adult vaccination space in India is at a nascent stage, dominated by insurance banks in B2B market landscape. As a result, most people bothered to take vaccines only if it was covered by their current insurance policies.

Sonam explains, “When I realised the structural lack of awareness and ignorance can be tackled by intervention by someone at the level of government or WHO, I decided to sell the startup,” adding that she did not want run a services platform, catering to insurance companies.

The entrepreneur had been working from a co-working space where she met Chandrabhanu Pattajoshi who was then building Glossaread at the time. Involved as an advisor initially, Sonam eventually got on board as a co-founder in 2018.

This 13-year-old uses Minecraft to make learning easy and fun, and has received praise from Microsoft’s Satya Nadella

In March 2020, Glossaread grew 10x and saw 10 to 15 times increase in repeat learners. It is now tapping the edtech market, which emerged as a ‘darling sector’ in the prolonged period of social distancing to stem the spread of COVID-19 globally.

According to a joint report by KPMG and Google, online education market is set to flourish with around 9.6 million users on board and the market value reaching $1.96 billion by 2021. This is a huge estimated growth, up from 1.6 million users in a market valued at $ 247 in 2016. The report also highlighted that quality of content is a major determinant while choosing certain brand.

“The concern of raising funds, continuously validating your model, keeping your employees happy all the time, and attracting talent are practical challenges that we face every day. In the midst of all this, ensuring you are at the top of your spirits all the time is one major challenge,” she shares.

Sonam also shares that it is always harder to raise funds as a woman entrepreneur. However, Glossaread has successfully raised nearly Rs 65 lakh from two rounds of angel funding in 2018 and 2019. At present, the startup is in the process of closing their first institutional fundraise of Rs 3 crore.

These 4 women-founded edtech startups were launched during the pandemic