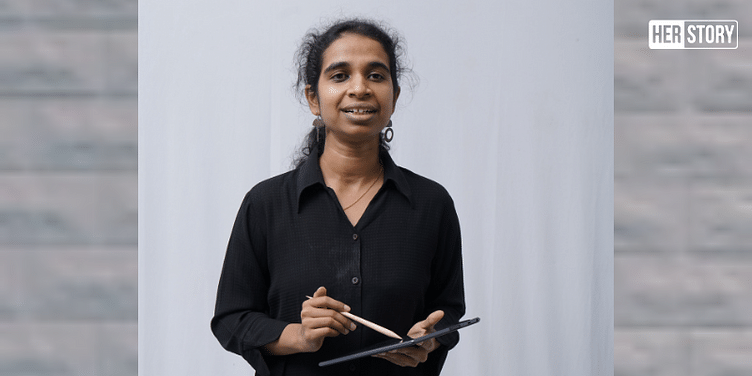 Anita Kishore, teacher and Chief Strategy Officer at BYJU’s speaks on the future of learning, student and teachers’ shared love for content, and the gift of learning.

When the coronavirus spread sent all of India into a lockdown in March this year, students had to adapt to learning from resources on the internet. Following this, Bengaluru-based edtech unicorn ﻿BYJU'S﻿ made all its content free and introduced live classes.

On the day she spoke to HerStory, Anita Kishore had just finished recording a few lessons on mathematics and physics, in the wee hours of the day before stepping into her role as Chief Strategy Officer (CSO) at BYJU’s. She is tasked with the startup’s finance, managing fund raising, existing investors and identifying new ones.

She also looks after strategic initiative and partnerships – of which there has been many recently – including the $300 million acquisition deal of Whitehat Jr. in August and of US-based startup Osmo for $120 million last year. Anita also oversaw the startup’s partnership with US entertainment conglomerate, Disney in 2019.

However, these milestones do not come in the way of Anita’s love for teaching and she makes sure to record at least two to three classes in a week. “In the current situation where children are forced to be away from school, it is important to ensure we keep them going and help them to continue to learn. Hence, I have been spending more time teaching since we launched online classes,” she says.

In a conversation with HerStory, Anita reflects on her role as a teacher, life-long learner, and leading BYJU’s as Chief Strategy Officer thereby shaping the education and learning experience of over 64 million students through its app. She also spoke on the rapid acceleration of edtech platforms as the only means of study amid COVID-19.

The future of learning

Anita says that the startup has been “fortunate in the time of crisis to emerge as a sector of positive relevance.”

“There is a massive acceleration for online learning as a segment. What would have taken us three to four years to achieve just in terms of awareness has been accelerated in a short period of three to four months because everybody is learning 100 percent online.”

She is referring to the significance of most edtech startups whose role has gone beyond complementing a student’s lesson at school to being the only source of learning post lockdown.

“What students, parents, and teachers were reluctant to try are now being forced to do so because of the situation. It has brought in a lot more people into the fold of online learning.”

Statistics reflect this claim. Nearly 9.6 million students are accessing online learning platforms, pumping the market value estimates to $1.96 billion by 2021, according to a joint report by Google and KPMG.

Front row seat for every student

Teaching comes naturally to Anita who began early – as fifth-grade student. She would help other children including her seniors in the neighbourhood. The passion has sustained regardless of the tools used, be it pen, paper, chalk, microphone, or visual effects. She has even taught a crowd of 9,000 students at the Vallabhbhai Indoor stadium in Mumbai.

While it has been a smooth transition, the experience has not been the same. She says, “The online medium lends itself really well to teaching a lot of hard concepts because it allows student to visualise. In a classroom, one can show a copper wire and only hope that they can imagine how the electrons flow inside.”

This also provides more value to student's time by breaking down complicated concepts effectively within three minutes, as opposed to around ten minutes in the classroom, she says.

More importantly, she says, digital learning provides the experience of being a front-row student to everyone. “The feeling that the teacher is speaking directly to them is very powerful for effective teaching. On the other hand, teachers lose the joy of seeing the student's expression and reaction to the lesson. It is something we certainly miss while recording lessons,” Anita adds.

At the end of the day, she emphasises that the student and teacher connect and bond over their shared love of the content.

The week that was: From the tech journey of Kaleidofin’s Natasha Jethanandani to the imminent IPO of edtech giant BYJU’S

Starting the journey with a teacher

Anita was one among the many students who learnt under teacher-turned-entrepreneur Byju Ravendran during his early days of starting up. A final year student of engineering at Veermata Jeejabai Technological Institute in Mumbai, she attended one of BYJU’s sessions on CAT at her college in 2007.

“I was really impressed by the session. I always liked and was fascinated by mathematics but this was the time I saw a teacher who approached math and thought about the subject in the same way as I did,” she recalls.

Anita credits her achievement to the education she has received over the years. Her wish to provide similar opportunity to young students drives her passion to teach.

As such, she says her role and decisions as the Chief Strategy Officer complements the larger vision to democratise and make education accessible by leveraging technology. She highlights that the acquisition of ﻿WhiteHat Jr﻿. has brought on board more than 6,000 teachers.

“We are able to make teaching aspirational as well as provide an opportunity for teachers to return to the profession,” she shares.

Recalling the teachers in her life, Anita says, “I started liking math and got interested and curious in studies because I had a kindergarten teacher who pushed and prodded me to explore and find answers. During my engineering years, a professor got me interested in fluid dynamics and core mechanical subjects to finally Byju Raveendran who not only helped me crack CAT but continues to be a teacher and mentor – now beyond maths to how I approach things in day to day life.”