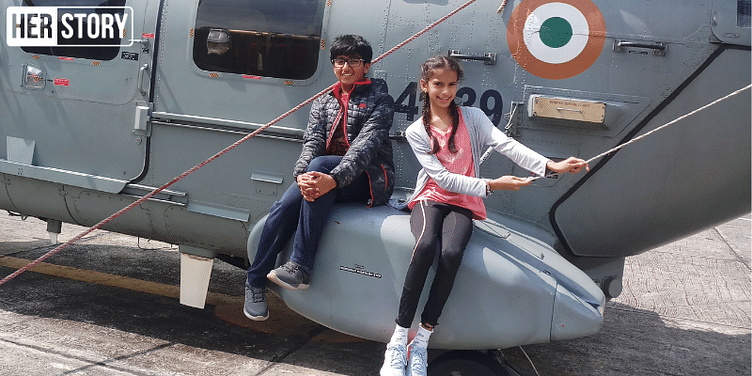 It all began during a dinner-time conversation when Nitya Rathi (12) and Kartikeya Singh (14) were just nine and eleven years old, respectively. They were discussing the popular series, Good Night Stories for Rebel Girls, when they wondered aloud, “Don’t Indian women pursue their dreams? Why aren’t their stories highlighted?”

This thought sparked further discussions with their mother, and thus began a journey towards understanding issues like gender equality and women’s rights.

Along with their mother, they set about envisioning a mentoring platform for boys and girls that would connect them to extraordinary women, “the rebels” who have shattered stereotypes and gender norms to pursue their dreams.

Every woman has a story

“We thoroughly enjoyed the book, but after reading it we thought, doesn’t every woman have a story? From your neighbour to your mother, teacher to even your friend, every woman has a story. On a side note, men also have stories, but the challenges a woman faces, compared to that of a man, are relatively vast. This was the thought behind creating a platform that allows the stories of these women to reach the youth of today so they can get a better view of the crazy world they live in - and enhance their leadership skills,” says Nitya.

The duo thought of the name Rebel Girls, “because of the undaunting desire of girls to succeed, even if it meant being a rebel and going against the stereotype.”

﻿Rebel Girls﻿ began as a small group in 2017, of 15-20 children all huddled in a room in Delhi, curious to learn about societal issues.

“She described her life journey as being a “different” journalist, and we learnt not just about gender issues, but also social issues. We discussed topics such as social stigma around gender and also about various inequalities that exist in society from a realistic view. We also participated in practical activities addressing norms about child marriage, the dowry system, etc.,” recalls Nitya.

Cashing in on tie-dye fashion trend, this 14-year-old has started her own clothing brand

With Anuradha, they had a jamming session, where they were mesmerised with her skills on the tabla, and with Nigr Shahji, they explored complex concepts of science through simple experiments.

Kartikeya explains, “Through these interactive and fun sessions, the children have explored a wide range of complex issues - ranging from ideas of good governance, civic challenges, and how to drive change in society, to the role of a humanitarian aid worker and various reasons for human displacement, including war, genocide, and natural calamities. We have even discussed girls pursuing careers in STEM and sports.”

Rebel Girls has partnered with the School of Active Citizenship and Dhwani by Jasveen Ahluwalia to create the Gender Equality Champions Lab that aims to inspire young people to become champions of equality and to commit to ending all forms of discrimination and violence against women and girls, the empowerment of women, and achieving equality between women and men as partners.

The global programme is designed for young leaders (ages 13 to 18) to gain a better understanding of gender through dedicated interactive sessions while also gaining practical experience in advocacy, project implementation, and fundraising through fieldwork. Organisations like the KYP Foundation, ﻿Ketto﻿, and Girl Up have also agreed to join in as mentors and project partners. The first cohort started in October 2020.

They also recently launched a website (rebelgirls.in), which features blogs by students who write about gender roles in various facets of life. Interestingly, the platform does not charge any fee for membership

“The only thing we have invested to create Rebel Girls is time and knowledge. Our objective is to not make money, but to generate awareness among the youth of today about societal problems and how to tackle them. All you have to do is give some time, knowledge, and add a spark of creativity,” says Kartikeya.

As students, both of them have their hands full with academics, but they reiterate that time management is key for juggling different roles. Kartik is into debating, MUN, theatre, and writing while also preparing for his board exams next year. Nitya, who is passionate about dance, has been training in ballet since she was six years old.

“In the long term, we wish Rebel Girls to be a platform for students to learn a bit more of the society we live in and give them the opportunity to work on campaigns and advocate for what they are truly passionate about. We hope to eradicate the evils of patriarchy, misogyny, and many other social evils from our country, and to inspire youth to strive for their goals and make their dreams come true,” says Nitya.