Despite a bad injury and many hurdles, karate champion Amritpal Kaur has her eyes set on gold 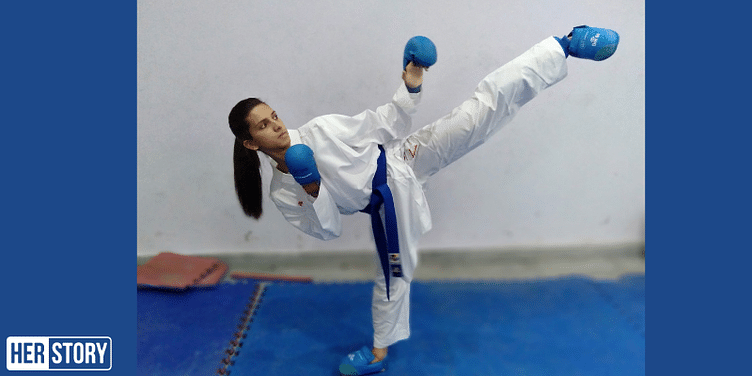 An ACL tear and consequent surgery can't keep karate champion Amritpal Kaur down. The sportswoman is all set to bounce back at the World Championships next year.

In January this year, karate champion Amritpal Kaur was competing at the President’s Cup in Goa when she had a bad fall. She thought it was a simple fall, but fell again when she tried to get up.

Medical tests revealed a torn ACL, which would require expensive surgery and complete bed rest for more than six to seven months. Amritpal thought that the long hiatus would be the end of her career. Other imminent worries were the huge cost of surgery and rehabilitation.

Fortunately, a friend of hers tweeted to actor Sonu Sood, who responded immediately and said he would bear the expenses of the treatment. That was one worry out of the way. The COVID-19 pandemic, meanwhile, had put a stop to all sporting events, and Amritpal could rest without the worry of missing any major competitions.

Amritpal is now undergoing rehabilitation and looking forward to getting back to the arena next February.

All set for a comeback

The first Indian to win the gold medal at the Karate World Championships has had a journey filled with hardships at every step.

“My first international travel was to Kazakhstan in 2017. I did not have a kit of my own and was compelled to borrow from other participants,” she recalls.

With very little support in way of training infrastructure or sponsorships, Amrit used her scholarship from the Delhi government to pay for her tickets so she could travel for international events. Even that was barely enough, so instead of competing in many events as possible, she just chose to participate in one or two a year.

Amrit’s story is one of determination and survival against the odds.

The eldest of three siblings, she excelled at her studies and extra-curricular activities. However, her lack of sporting accomplishments precluded her from winning the prestigious ‘All-Rounder’ award at her school.

“I was determined to bag the award, and so began participating in various sports and started taking badminton coaching classes as well. The next year, the award was mine,” she says.

For badminton coaching, Amritpal had to travel for an hour every day in the wee hours and often faced harassment. She thought it was a good idea to learn basic self-defence and joined karate classes at a community park near her home. Soon, she was hooked.

She eventually gave up badminton and started working on karate full time.

“I started competing in local competitions; I lost all my initial bouts but never gave up. I devoted five hours to karate every day, practising on the terrace long after my parents went to bed. I saved my pocket money so that I could visit the cybercafé and watch karate videos on YouTube,” she says.

Amritpal has a black belt in Sito Tyo Seiko Kai, a style of karate most popular in West Japan.

Amritpal’s determination and hard work paid off and in 2012 Amrit became the Delhi State Karate Champion. In 2013, she won the silver medal at the National Championships and in 2014 went on to win gold.

In 2015, she participated in the qualifying championships for the Commonwealth Championship and won third place, which got her a spot on the Commonwealth Team. A coach from Hyderabad chose her to train with him for the games and also sponsored her. She went on to win the gold medal at the 2015 Commonwealth Games.

But her mother was determined that Amrit continue her studies and secured loans to pay fees for her graduation in English Honours from Janki Devi Memorial College. Currently, Amritpal is pursuing her master’s degree from IGNOU.

Despite the many challenges, life seems to have come full circle for Amrit. And she’s quick to spot the silver lining.

“I am receiving support from Sujay Jairaj, an entrepreneur and philanthropist who is an ardent support of sports personalities in India. With his support, I am certain I’ll be able to focus more on my game, and not worry too much about other things,” she says.

Sujay has also secured the life rights to Amrit’s journey and hopes to be able to tell the tale of her amazing journey through a biopic very soon.

Amritpal says in karate your toughest opponent is yourself as it’s a mind game, and “you need the right timing and right mindset to be able to win”.

Her advice to other girls wanting to take up the sport reflects her own commitment to the game.

“There will be times when you will feel like giving up. The hurdles may break you, but you have to get up and give it a go again. Be consistent in what you do, and success will be yours.”

In February, though Amritpal will start from ground zero, her aim is set high: the World Championships! And there’s no stopping her from going for gold.