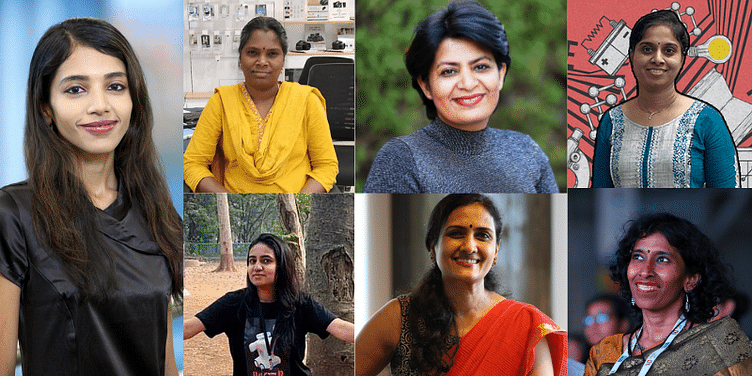 Internet and technology are defining most of where the world is headed. As 2020 draws to a close, turn to these stories of women leaders in technology we discovered this year for inspiration.

Many Indian women are at the forefront of leading tech innovations and solutions in India and abroad and the trend is likely to continue. A research by Mastercard states that 93 percent of girls (aged between 12 and 14) surveyed said they are interested in pursuing a career in STEM.

Out of this, 38 percent said they may not take up a position as the industry is male-dominated. This reflects the urgent need to recognise accomplished women in the field to show it is possible for women to make it and rise in the world of STEM.

HerStory presents women who are making the world more exciting through their unique innovations.

Post the COVID-19 outbreak, India was initially importing many of its diagnostic tool kits. Sasikala Devi, a researcher and academician at SASTRA Deemed-to-be University in Tamil Nadu decided to put her expertise in deep learning and artificial intelligence to good use.

She sourced over five lakh X-Ray images as datasets from Stanford University to develop her prototype, LungXpert. It is an affordable prognostic tool for early detection of cardiovascular and pulmonary disease including COVID-19. Claiming an accuracy rate of 90 percent, she says feeding the data of the Indian population into the system will make it more efficient for use in the country.

Her innovation was one of the winners at the MyGov COVID-19 Shri Shakti Challenge, a contest to develop solutions to tackle COVID-19. It also won an award in the special category of RAISE 2020, a global AI summit organised by the Ministry of Electronics and IT.

Aaksha Meghawat’s fascination with the internet has always kept her looking for the next trend and change. A machine learning (ML) engineer at Apple, she is also a tech lead (DRI) for Global Expansion of Hyper-Local Language Models at the Cupertino-based tech giant.

To stay relevant, she advised aspiring techies to be on the lookout for online courses in tech and spend a mere 20 percent of their time to think of what the next problem would be.

With a keen interest in everything intersecting technology, society, history, and philosophy, the young techie is guided by the motto, “value time and in time, you will be valued.”

Supriya Rathi Bagri is a tech entrepreneur expanding the horizons of robotic entertainment through her startup ﻿RoboVR﻿, founded in 2016. While she is deeply passionate about robotics, sports taught her discipline and team work.

Rashmi Mogha is the head of AAU Products at Automation Anywhere, a global leader in Robotic Process Automation (RPA) and founder of women empowerment platform, eWOW. She is also an influencer, startup adviser, and a global keynote speaker.

A scholarship for a three-year computer at NIIT launched Rashmi into the world of technology. A recipient of Women in IT Awards Silicon Valley last year, she is keen on empowering women in her professional capacity and is vocal about discriminations at the workplace.

In an earlier conversation with HerStory, she said, “Women are stereotyped as non-technical, and their development skills are questioned, which often shakes their self-confidence.”

With over two decades of experience as a woman in tech, Jaya Jagadish is now corporate vice president of design engineering at AMD. She joined the firm after completing her master’s in electrical engineering from the University of Texas at Dallas in 1994. This was followed by stints as consultant and design engineer.

When she returned to India in 2005, Jaya became one of the first team members to join AMD India’s development centre in Bengaluru. She hired, trained, and built a team of over 400 people responsible for designing AMD CPUs.

Stating that workplaces should be more conducive for women to rise to leadership roles, Jaya has introduced several programmes at AMD for women to easily return to work post a maternity break and offers career support systems to all women employees.

[Woman in Tech] My biggest learning is the art of influencing without authority: Jaya Jagadish, AMD

With core expertise in machine learning and artificial intelligence, Padma Priya Gaggara is the Principal Group Engineer Manager at Microsoft.

Padma Priya pursued a BTech in Computer Science from JNTU in Hyderabad, followed by a master’s from the University of Arizona.

In the last 18 years, she has experimented with building solutions across areas of Outlook, Hotmail, ecommerce, tech, health, and travel, among others. Padma’s love for maths in school guided her towards a career in tech and she learned about latest technologies like ML on the job.

The techie believes exposing girls to subjects like maths, science, and analytics in their childhood can help attract them to STEM fields.

Excited about the future of women in tech, says Brenda Darden Wilkerson, President and CEO, AnitaB.org

As managing director of AnitaB.org India, Maggie Inbamathiah is dedicated to empowering girls and women in the field of STEM. Having pursued a computer engineering degree in the 1990s from National Institute of Technology (NIT), Tiruchirappalli, she was one of nine girls in the engineering class of 40 and hence, all too aware of the disparity.

Starting her professional journey as a software engineer at Infosys in 1996, she founded Optimus Prime Solutions to make technology tools available for entrepreneurs and Mandram, a non-profit organisation driven to make information accessible in vernacular languages.

Throughout her journey, she has noted that women are first seen through their household responsibilities, before their capabilities and the values she has to offer are considered.

The leader is now working towards achieving a target of 50/50 Tech Equity by 2025.