On climate change activist Greta Thunberg’s birthday, a look at her calls to action in 2020 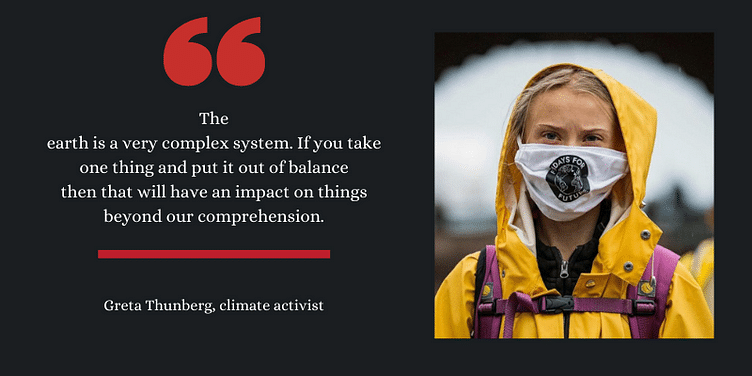 As climate change activist Greta Thunberg turns 18, here's how she continued to lend her voice to environmental issue in 2020, from net-zero loophole to throwing light on reality.

In the summer of 2018, Greta Thunberg began a sit-in protest outside the Swedish parliament every Friday to demand action on climate change. This gained prominence into becoming a global bottom-up movement called Fridays for Future where youth around the world pressure governments to protect the environment.

Greta continues to be the ever-so-firm voice against climate change.

As the teen climate change activist turns 18, here’s a look at what she highlighted this year in her fight for ecological harmony.

“The earth is a very complex system. If you take one thing and put it out of balance, then that will have an impact on things beyond our comprehension. And that goes for equality as well. Humans are part of nature, and if we are not doing well, then nature is not doing well, because we are nature.”

“It (response to coronavirus) confirmed what I already knew. That once we treat the climate crisis like a crisis, we can change things and we can achieve things.”

“I don’t feel the need to do things that others might.”

“Net zero – that is a very big loophole. You can fit lots in that word ‘net’.”

“I think we can safely say that if Trump wins it would threaten many things. But I’m not saying that Joe Biden is good or his policies are close to being enough. They are not.”

“We need to see it (climate change) as an existential crisis. And as long as it’s not being treated as a crisis, we can have as many of these climate change negotiations, talks, and conferences as possible. It won’t change a thing.”

“I don’t care about whether I’m considered as a child or an adult. I want to be met with the response that’s on my level.”

“The gap between what we need to do and what is actually being done is widening by the minute. We are still speeding in the wrong direction.”

“I don't think any climate activist does it because they want to. We do this just because no one else is doing anything, and because we need to do something.”

“There's a myth that young people get anxious or depressed when people talk about the reality of the climate crisis. My experience is the opposite. The worst part is denial, looking away, downplaying, or spreading false hope saying ‘we'll fix this’ without taking sufficient action.”

"As young people, we would really appreciate if we stopped only talking about future, distant hypothetical goals and targets."

“One of humanity’s greatest, present threats is the belief that real, sufficient climate action is being taken, that things are being taken care of — when in fact they’re not. Not at all.”

“We say the same thing over and over again but it does not seem like anyone is listening.”