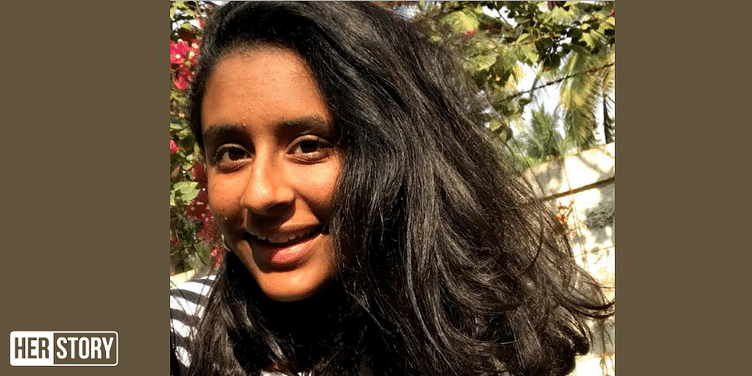 Mehr Sohal, a 16-year-old student of Neev Academy, Bengaluru, has launched The Joyful Peach, a news portal that aims to spread positivity among Generation Z.

As a 16-year-old student of Neev Academy, Bengaluru, Mehr Sohal started becoming aware of the many complex things happening around her nationally and globally.

Reading the newspaper and watching TV every day led her to form her own opinions. But she soon realised that most of the news centred on negativity .

“Whenever one opens a newspaper or some form of digital/print media, the pages are flooded with horrifying stories and articles.

“Research threw up some interesting facts. I found out that issues in news have become a rising cause of stress amongst the world’s population. This is specifically for Generation Z, with 75 percent of this community stressed over mass shootings, 62 percent concerned about suicide rates, and more (according to a 2018 APA Survey),” she says.

Mehr agrees that negativity is unavoidable, but believes that positive and “feel-good” news can help us feel better and spread positivity among the young population.

This is why she launched The Joyful Peach, a news portal that strives to focus entirely on “happy events” around us. Mehr developed this idea and made it a reality during her six-month programme at Young Entrepreneurs Academy (YEA!).

She explains, “Three things prompted me in this direction – a media literacy course I attended in school, an article by Hans Rosling titled ‘Good news at last: the world isn’t as horrific as you think’, and the COVID-19 pandemic. All these made me more aware of the power of the media, and how it is essentially its responsibility to deliver the truth.”

Inspired by Sudha Murty, this 14-year-old has started a venture to inspire youngsters to work for social causes

Positivity is the need of the hour

Mehr says she realised the truth that the world simply isn’t as morbid and unpleasant as some media organisations make it out to be, and that positivity and happiness are the need of the hour in the wake of the pandemic.

“As academic Hans Rosling stated, ‘Our instinct to notice the bad more than the good is related to three things: misremembering of the past; selective reporting by journalists and activists; and the feeling that as long as things are bad, it’s heartless to say they are getting better’.

"The media often exploits our weakness of loving drama, gossip, and rumours. I decided to ‘keep it real’ with The Joyful Peach and give the community their much-needed daily dose of truthful, positive news,” she adds.

The news portal is currently divided into four categories:

2. Peachy News: Hearing from the community (stories, anecdotes, and experiences)

4. COVID Plus: Positivity during the pandemic

This service aims to serve as a “repository of happiness” that goes beyond just news and reporting, and focuses on empowering the youth, with teenagers being the target audience for both readers and writers.

The content of The Joyful Peach is free and accessible to all users.

Mehr is looking at a revenue model to further invest in developing her existing website, marketing the platform on social media, boosting her SEO, and eventually paying writers.

“I aim to generate revenue through advertisements. I also plan to write ‘paid’ stories for corporates to promote their good work and the positive social impact their products have,” she says.

The portal at present has 75 articles, and the young founder is looking to increase community-generated content and readership. She relies on social media to raise awareness on the need and scope of impact of The Joyful Peach, and create an audience of viewers and writers.

“I launched this platform in early 2020 and am looking to increase the number of readers, improve the quantity and quality of content, and start approaching corporates for advertisements and paid articles on them. The pandemic has created a ‘new normal’ where there is a huge need for this dose of positivity,” Mehr says.