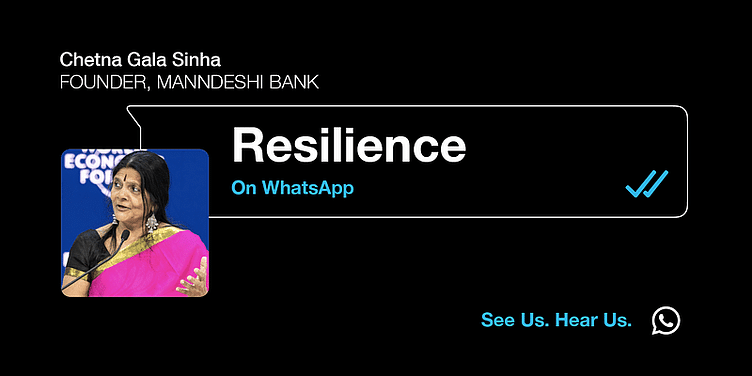 Chetna Gala Sinha’s Mann Deshi Mahila Sahakari Bank in Mhaswad village in Satara district, Maharashtra has been empowering women since 1997. Here is how the women have digital tools and leveraged the banking facilities to continue to create an impact even in the pandemic.

If you visit the small village of Mhaswad, Maharashtra – around 175 km away from Pune, you’ll find one of the largest microfinance banks of the state – ﻿Mann Deshi Mahila Sahakari Bank﻿. But this microfinance institution is a little different from the others. The cooperative bank is run by women for women, and was founded by Chetna Gala Sinha in 1997.

One of the first few banks to feature doorstep banking in a small village in Maharashtra, the bank had started issuing smart cards and special loans to women. Therefore, it is no surprise that the women of Mhaswad have aggressively adopted digital platforms like WhatsApp post-COVID-19.

Chetna tells HerStory, “These women associated with Mann Deshi Foundation have been making masks, and running catering, paper plate, and cups business. They have created WhatsApp accounts through which they connect with people. They have been using WhatsApp and ﻿Facebook﻿to display their products.”

Chetna adds that when COVID-19 hit, the women took over the running of the household. Digital platforms like ﻿WhatsApp﻿helped them stay connected with their businesses and even enabled them to buy raw materials or place bulk orders.

“Our women have sold over one million masks using WhatsApp. Through virtual training programmes and videos, the women have been able to make and sell the masks,” says Chetna.

The digital platform even helped with agricultural activities.

“During the lockdown, when the animal rearing businesses were shut, especially in rural India, all the women rearers started a WhatsApp group to sell goats and chickens. We are already giving loans to help the women buy smartphones,” adds Chetna.

She adds the WhatsApp groups are used for imparting digital financial literacy and helping women run their businesses.

Building a bank for women

Born and brought up in Mumbai, Chetna had moved to Mhaswad after her marriage to Vijay Sinha. For her, social and public causes have always been an important part of her life. In fact, she had met her husband when they were a part of the Jayprakash Narayan movement.

The idea of starting Mann Deshi Bank struck her when Kanta Amandas Salunke, a blacksmith, told Chetna that she wanted to save money but the banks were refusing to open an account for her. Chetna was surprised, so she decided to visit the bank with Kanta Bai.

The bank officials told Chetna that Kanta Bai’s savings were too meagre. This struck Chetna as very odd and she decided to start a bank for women like Kanta Bai who had meagre savings. “Everyone has aspirations, they just need the right opportunity,” adds Chetna.

It was then that Chetna had started the uphill task of setting up a cooperative bank for women in her village.

For her, setting up the bank wasn’t a new challenge.

In 1986-89, when a new amendment to the Panchayat Raj Act made it mandatory to reserve 30 percent of the Panchayat seats for women, Chetna began talking to the women in her village and motivated them to participate in the Gram Panchayat elections. Soon, she established the foundation to train women on how local self-government works. Creating the Mann Deshi Mahila Sahakari Bank was her next challenge.

“When I sent my application to the ﻿Reserve Bank of India﻿, it was rejected, as the proposal had thumb impressions instead of signatures. I felt dejected. But the women said that we needed a bank, and they were willing to work on it,” says Chetna.

From that day onwards, Chetna would spend a few hours with the women of the village. After finishing their daily activities and chores, the women would gather around to learn banking, mathematics, and compound interest.

This went on for six months, after which the women, along with Chetna, went to the RBI bank official in Satara district. They told the officer, “You had rejected our licence because we were illiterate; today we’ve educated ourselves and are sitting here. But you can’t blame us for our illiteracy, because there were no schools in our village when we were growing up.”

“Tell us to calculate the interest to any principal amount, and ask any of the bank officers to calculate the same using their calculators. And see who is faster and accurate,” the women challenged the officer.

From that day onwards, the women of Mann Deshi Foundation at Satara district have proved to be trailblazers in their own fields by creating jobs and opening cattle camps so that the animals can get sufficient water in times of drought.

“Whether it is starting a training centre or securing their money so that their husbands don’t squander it on drink, these women inspire me every single day,” says Chetna.

“Quite like the sun that shines equally on everyone, WhatsApp democratises its offerings for all. WhatsApp is that one factor that has promoted inclusivity for our rural women partners and enabled their digital shift to help them integrate with the mainstream,” she adds.

Thanks to Roshni Mukherjee students now have no ExamFear