Diagnosed with a bone disease as a child, this Coimbatore woman runs a successful business of African paper dolls 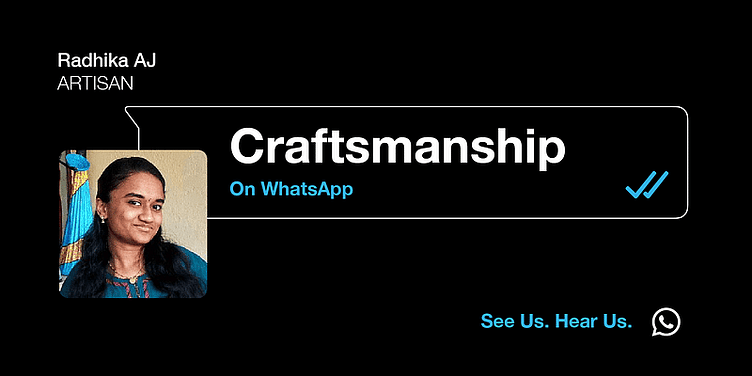 All of 21, Coimbatore-based Radhika AJ has been making and selling African-style dolls made from upcycled newspapers for four years.

For most people, the past year likely might have been the longest they had confined themselves at home due to lockdowns and coronavirus-induced safety measures. But Coimbatore-based Radhika AJ has spent much of her 21 years till now at home, after getting diagnosed with a rare bone disease as a child. Yet, as her mobility got restricted, creativity took hold.

Starting out with greeting cards, she gradually discovered a passion for making African-style dolls from upcycled newspapers. While it was still a hobby for her, friends, family, and even strangers began reaching out to buy her dolls.

“Making these dolls and crafts helped me when I felt very lonely,” says Radhika. “I felt free, I didn’t think about other things. I feel like I have built a world for myself.”

It has been four years now that Radhika has turned her passion-cum-hobby into a business and sold 800 dolls. Earlier this month, she received the Kovai Wonder Woman Award recognising her as an innovative thinker and creative artisan. Since early last year, she has given 40 interviews, says her brother.

Radhika has as many as 300 catalogues of dolls, which are showcased on Instagram. Interested buyers make enquiries on WhatsApp.

Radhika receives orders from individuals, as well as bulk orders from organisations. Most recently, an engineering college in Coimbatore placed an order for 150 dolls. She also made 100 dolls of different designs and colours for a Mangaluru-based woman, who wanted them for her housewarming party.

After the lockdown started on March 25 last year, business was paused for three months due to logistics issues. During that time, Radhika made 80 dolls as customers continued to show interest. The dolls were delivered soon after the lockdown eased.

While African-style dolls are Radhika’s forte, during the lockdown she also tried her hand at making dolls of Tamil megastar Rajinikanth, scientist and former President APJ Abdul Kalam, and iconic Disney princesses Elsa and Anna. It’s still a work in progress, she says.

Carving a place for herself

A friend of Radhika’s brother saw her interest in crafts and suggested she learn making different things from YouTube videos. Over time, she made photo frames, pen holders, baskets, and African paper dolls.

At that time she was recovering at home after undergoing surgeries due to bone fractures.

The first time Radhika suffered a fracture was when she was just five. Her left thigh bone got fractured after a fall that made it unbearably painful for her to even lift her feet. Later, she learnt that her muscles were growing through the cracked bone.

Seven surgeries later in 2010, her condition was diagnosed as a rare bone disease similar to brittle bone disease.

When she started going to school at eight, not only did she have to take a few weeks’ break to ease the pain from walking, but the hours of sitting at school also caused her spinal cord to bend.

This was followed by further bone fractures, as a result of which she could not attend school and other activities during her teenage years.

Cut to the present, with her business picking up, Radhika is preparing for her Class XII exam, for which she is set to appear as a private candidate in May this year.

“The love and support from my fans and customers inspire me to do more,” says Radhika. “Whatever I do today is because of this unconditional love. I plan to pursue higher studies in arts and craft and hopefully, teach doll-making skills to children around the world.”