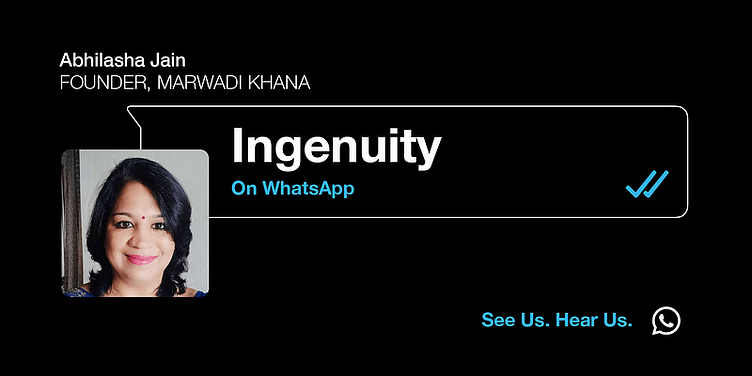 Based in Gurugram, Abhilasha Jain’s home-based venture, Marwadi Khana is gaining popularity with a fast-increasing clientele on WhatsApp.

For home chef Abhilasha Jain, the doors to entrepreneurship opened up with just one social media post in 2014. She offered to cook a traditional Rajasthani dish, and landed 40 orders for the following Sunday.

An MA English graduate, Abhilasha worked earlier as an interior designer and always wanted to start something of her own. With more free time as her daughter grew up, she experimented with Marwadi Khana, her home-based business, and there was no turning back.

Starting from her home kitchen in Gurugram, she cooks authentic Rajasthani dishes and spreads the word on WhatsApp - where she has maintained five lists of 250 customers each. As home chefs became all the rage during the pandemic, her customer base increased to a 21-broadcast list of 250 people each on WhatsApp.

A taste of home

For Abhilasha, cooking is a serious affair. Her dishes like Dal Baati and Churma, Lapsey, Makki ka Dhokla, Bajre ki Khichdi, Gondh Ladoos are made from recipes passed down from generations.

“My aim is to showcase Rajasthani cuisine, and its variety and richness through ingredients of high quality. My ladoos are a big hit, and I deliver them all over India.”

Soon, she set up a kitchen on a 1,000 sqft area with an investment of Rs 20 lakh. While she stopped taking orders for three months during the lockdown, Abhilasha connected with her customers by actively sharing recipes and conducting live cooking sessions on ﻿WhatsApp﻿.

“When I resumed taking orders towards the end of June, there was a 25 percent increase in orders coming in as hygiene became a general concern. But competition has also increased and today, every other apartment in the city has at least one home chef,” she says.

Although sales and customer base has increased, Abhilasha says corporate orders have come to a standstill.

Despite online presence with her website offering food, sweets and spices, 90 percent of the sales take place on WhatsApp.

Unlike most entrepreneurial ventures, expansion and scaling is not a concern for Marwadi Khana. Abhilasha is clear that the idea of making a business out of it should not get in the way of living her passion and simple joy of cooking.

However, having moved out of her home kitchen and assembled a small team of five full-time workers meant keeping an eye on the revenue as well.

“I have more overheads now, and there is rent to pay. Also, the food I make is niche; one that cannot be had daily. I do not want to compromise on the quality of food in any way, especially the quality of ghee, which is a major ingredient in the cuisine,” she says.

Initially, delivery used to be a key daily challenge as she worked with delivery personnel on a daily wage basis, risking whether they would show up or not. The entrepreneur now works with third-party vendors to ensure seamless delivery.

“I started Marwadi Khana purely out of passion and am enjoying it. For the next two years, the goal is to feed as many people who truly enjoy my food. As for the mithais (sweets), I hope to scale it pan India and even export in the next two years,” she concludes.

From journalism to entrepreneurship, how Shreyasi Singh is setting new standards with Harappa Education