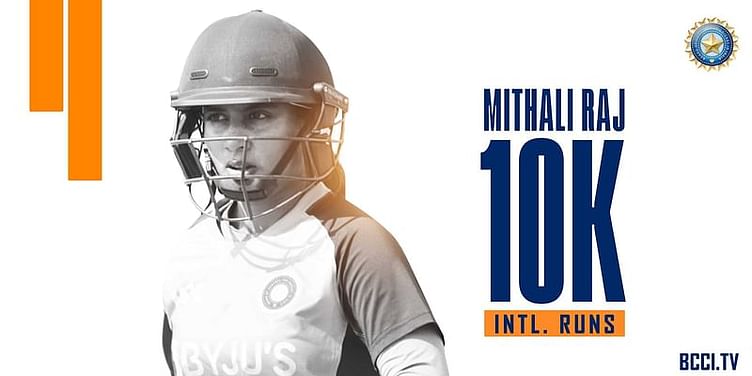 Mithali Raj has become the first Indian woman cricketer to score 10,000 international runs across all formats. She is the second woman in the world to achieve this feat.

Mithali Raj has become the first Indian woman cricketer to score 10,000 international runs across all formats. She reached this milestone in the ongoing India vs South Africa one day international in Lucknow.

In fact, she is the second woman cricketer in the world to achieve this feat.

Captaining the Indian side, Mithali achieved the feat with a boundary off Anne Bosch in the 28th over of the Indian innings. However, she departed in the next ball by hitting straight to Mignon du Preez at midwicket.

Her scorecard read 36 runs from 50 balls, with four boundaries in the tally. The Indian team has set a target of 248 runs for South Africa to chase.

The 38-year-old Mithali joins England's Charlotte Edwards in the elite club of women to have 10,000 international runs in their kitty. That makes her just the second woman in the world to have done so.

Making her international debut against Ireland in 1999, Mithali is playing her 212th ODI. She has also represented India in 10 test matches and 89 T20 Internationals.

Nicknamed as the ‘Lady Tendulkar of Indian Women's cricket,’ she is also the all-time leading run-scorer for India in all formats, including Tests, ODIs, and T20Is. She is also the first Indian and 5th woman cricketer overall to score over 1,000 World Cup runs.

Mithali is the youngest woman to score an ODI century and is also the youngest captain of the Indian women’s cricket team (at 21).

Mithali was felicitated with the Arjun Award in 2003 and the Padma Shri — India’s fourth-highest civilian award — in 2015. The latter is extra special as she was chosen for the Padma Shri over Virat Kohli.

Mithali has also been featured on BBC’s 100 women’s list in 2017. In the same year, she was named in the Wisden Leading Woman Cricketer in the World.